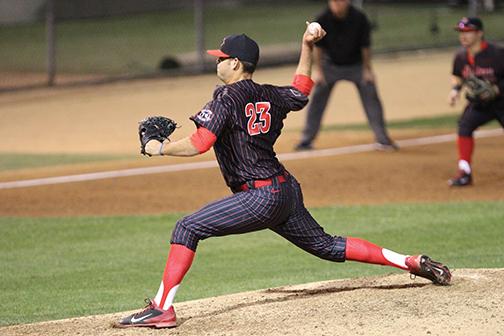 Before the 2013 season, the Aztecs only managed to make it to NCAA Regionals, the equivalent of March Madness, one time in 21 years.

The tradition generated by three consecutive conference tournament championships is something the baseball program should take pride in, but the Aztecs are not likely to win a fourth this year.

The College Baseball World Series is the pinnacle for any Division I college baseball team, and there are only two ways to get there: an at-large bid following a great season or winning the conference tournament.

Players and coaches will tell you that winning one tournament championship  is incredibly difficult, and winning three consecutive is nearly impossible.

From a logical approach, the odds are squarely against the Aztecs winning a fourth straight conference tournament, but that doesn’t mean they won’t play well enough for an at-large bid.

What makes it possible for the Aztecs to win a fourth straight is the fact that Mark Martinez is still manning the top spot in the program.

With Martinez on the coaching staff the Aztecs have been to four NCAA Regionals — three consecutive from winning their conference tournaments, and one in 2009 as an at-large bid.

The two most recent appearances were made with Martinez running the program, one officially as head coach and the other while then-head coach Tony Gwynn battled health issues.

In short, coaching is not the issue, but personnel is.

For the 2015 season, Martinez landed a top-20 recruiting class, but those players are in their infancy as collegiate athletes, and they have to grow by leaps and bounds to replace what the 2015 Aztec roster lost to the MLB draft.

The key position players that left SDSU at the end of the 2015 season accounted for 36 of the Aztecs’ 47 home runs and 231 RBIs, and three of the five key losses on offense had batting averages of at least .300.

SDSU also lost its top two pitchers to the draft when Bubba Derby and Mark Seyler were drafted in the sixth and 19th round, respectively.

Derby and Seyler made a combined 33 starts on the mound, which accounted for more than half the starts made by all pitchers. In addition, these two led the team in wins, innings pitched, strikeouts and ERA.

The Aztecs are young.

On a roster with 35 players, 22 are listed as underclassmen.

There is no fault in being a young team.

However it means that young players are going to have to step up and make plays in the field, have strong pitching performances and be able to put together offensive performances that negate the loss of key players.

It’s not that winning a fourth straight conference tournament championship is impossible or that it won’t happen.

It’s that given the personnel losses and the need for multiple players to mature in a hurry, it is highly unlikely to happen.

But going into this season, Aztec baseball should count itself lucky to have Martinez at the helm.

If there is one person who can put this all together and win the conference tournament championship, it’s him.