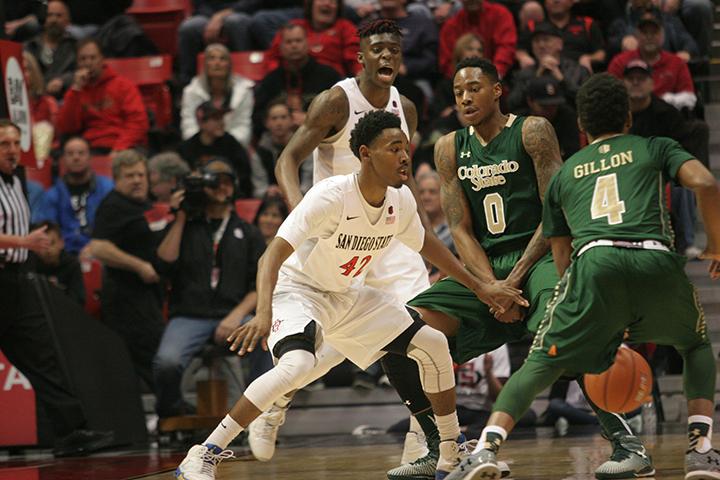 If the game against Colorado State was any indication, it hasn’t been easy for San Diego State men’s basketball to remain one of the few unbeaten teams in the nation in conference play.

The Aztecs edged the Rams by two points Tuesday and have won five of their last 10 by six points or less.

SDSU faces another stiff test Saturday as the team looks to set a school record with 11 consecutive wins to open conference against a University of New Mexico team that is coming off four straight wins, including two by five points or less.

“If you look at statistics from the Mountain West Conference games, you say ‘Tell me who is on top?’ you would say New Mexico,” head coach Steve Fisher said. “They have scored more points than anybody. They have the greatest margin of difference between scores in their games. … This is a really good team.”

Once again the Aztecs will have to rely on the defense to continue the streak. The Lobos have scored more than 80 in four straight games and average 78.3 points a game this season.

SDSU allows just 59.8 points a game to opponents, hasn’t given up 70 or more points since it faced Kansas University on Dec. 22, 2015, and hasn’t given up more than 72 points in any game this season.

Brown is playing in his first season since transferring from Butler University and ranks second in points per game in the MW.

“(Brown) thinks nobody in America is better than him, and that is how he plays,” Fisher said. “That rubs off on his teammates, especially when you back it up with statistics and performance.”

The Aztecs will have a number of streaks on the line when the Lobos come to town, including their 10-game conference win streak this season, 12-game conference win streak dating back to last season and their current five-game home win streak.
The Aztecs are 28-1 in MW play since Jan. 26, 2013 and are 45-18 in games decided by six points or less or in overtime since the beginning of the 2010-11 season, which ranks second nationally.
SDSU has won 43 straight home games when it shoots at least 38.9 percent from the field.

Sophomore guard Trey Kell will also look to continue his streak of 10 straight games scoring in double figures this season.

“He has taken great pride in not just scoring points, but being a basketball player.” Fisher said. “He has become very reliable defensively. He had more deflections in our game at UNLV than I think anyone has had in the last four or five years. He’s alert, uses his length, plays smart.”

Junior forward Matt Shrigley will be playing in his fifth game back from ACL injury Saturday and will look to contribute to this historic run.

“Matt is getting his sea legs back under him,” Fisher said. “I hope the crowd erupts when he makes his first 3-pointer (Saturday) against New Mexico.”

Tip-off is set for 1 p.m. Saturday at Viejas Arena and can be seen on CBS Sports Network or heard on The Mighty 1090 AM.

Follow @DAztecSports and @TheDailyAztec for live coverage and a postgame recap.