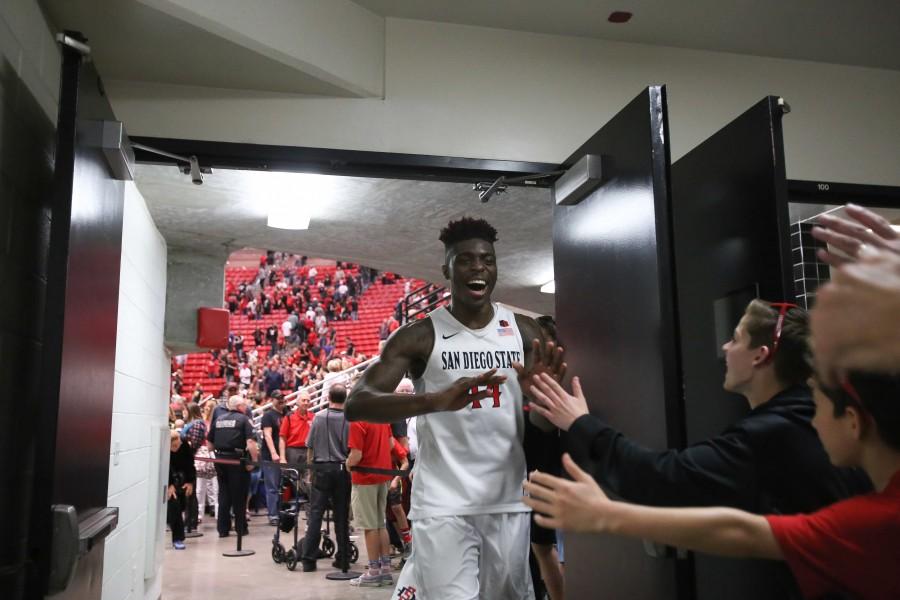 In a game where the stakes were San Diego State taking a 3 1/2 game lead in conference play, setting a program record for best start in conference play and tying the University of Utah for the best all-time start in Mountain West play, tension was high.

The game was as easy as the stakes suggested it would be.

But the Aztecs managed a 78-71 overtime victory over University of New Mexico at home, SDSU’s second overtime win during conference play this season.

SDSU was led by freshman guard Jeremy Hemsley, who had 23 points, setting a new career high, with 10 points coming from the free-throw line and eight points coming during overtime.

At the end of regulation the score was tied 66-66 following 22 seconds of heart-stopping insanity.

The sequence: UNM redshirt-sophomore guard Elijah Brown hit a 3-pointer to give the Lobos a five-point lead. This was followed by a tip-in from senior forward Winston Shepard, a UNM turnover on an inbound play and sophomore forward Malik Pope drilling a deep 3-pointer with four seconds left.

“The play was not designed for Malik to shoot,” head coach Steve Fisher said.

Pope said the play was designed for sophomore guard Trey Kell, and that he chose to shoot because the defender failed to come out and put a hand up, and Kell was slow getting to his spot.

The Aztecs started the game making one out of four shots, with all shots attempted as 3-pointers.

By halfway through the first half, New Mexico built a 18-14 lead behind the reliable free-throw shooting of Brown, who entered the game as an 87 percent free-throw shooter.

SDSU clawed back into the game and was was able to escape the early shooting woes by racing back to a 24-18 lead, which was the product of a 10-0 run.

The sudden surge of offense was capped off by Kell making back-to-back layups, one coming off a Pope rebound and the other generated by a steal from junior forward Dakari Allen.

SDSU went to the locker room at halftime trailing 29-28 after only connecting on one of 11 3-pointers, but hitting 60 percent of shots from inside the 3-point arc.

Kell led the Aztecs’ first-half offensive effort by scoring seven points on 3-of-9 shooting, finishing the game with 12 points, but only connecting on one of his 11 3-point attempts.

The Aztecs got their offensive post game jump-started by senior Angelo Chol’s six first-half points, but under-the-basket counterpart and fellow senior Skylar Spencer was not to be outdone.

In a 50-second sequence midway through the second half, Spencer scored his first basket of the game, followed by two blocks and then one more basket.

Spencer eventually finished the game with 10 points and eight rebounds.

“This program would not be where we are at if we did not have Skylar Spencer,” Shepard said.

The game started sloppy and turnover-ridden with both teams combining for 17 turnovers in the first half, but both teams tightened up play with SDSU only turning the ball over four times in the second half.

New Mexico had only two turnovers after the first half, both coming in overtime.

This was SDSU’s third single-digit win in four games with opponents committing key turnovers in the waning seconds of regulation.

“I’m going to enjoy this one tonight, and then I’m going to go back to work,” Fisher said.

Work begins this Wednesday at 8 p.m., when the Aztecs head north for their second matchup with  Fresno State.