Notebook: Malik Pope to the rescue for SDSU basketball 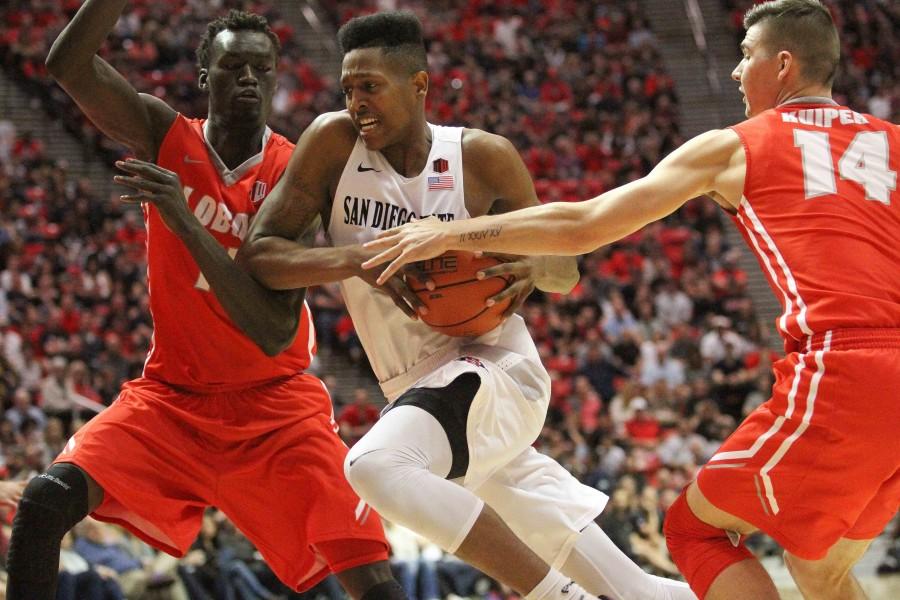 It took a full 40 minutes, an overtime period and perhaps a form of divine intervention for the San Diego State men’s basketball to escape Viejas Arena with their 11th straight victory to open Mountain West play.

With University of New Mexico guard Elijah Brown’s dagger from beyond the arc with 22 seconds left in the game, the Aztecs faced a five-point deficit and the fans in Viejas Arena all but threw in the towel and headed for the exits.

“We saw that,” senior forward Winston Shepard said, shaking his head with disdain on his face.

However, while the crowd within Viejas threw in the towel, Shepard was not going to allow his team to share that mindset and hit a layup to pull within three.

Then a controversial inbound play by the Lobos resulted in a turnover that gave the Aztecs new life, and if SDSU has shown anything over this 11-game win streak it’s that they will capitalize on the opposition’s mistakes.

Sophomore forward Malik Pope, who was held scoreless to that point and had only made 12 3-pointers in the season, would take the inbound pass and looked for sophomore guard Trey Kell, who the play was intended for, and realized his man was playing off and time was running out.

Pope set his feet and launched the shot and, perhaps due to an exiting fan opening the door, sunlight filled the arena behind the basket of Pope’s shot.

Call it a coincidence or miracle, but the Aztecs didn’t squander the opportunity.

Overtime didn’t provide the same excitement as the end of regulation, as Jeremy Hemsley put on a clinic. The freshman point guard made eight of SDSU’s 12 points in the extra period, including four crucial free throws to ice the game.

This win surpassed the 10-game winning streak set by the 2013-14 Aztec squad and tied the MW record, set by the University of Utah in 2003-04, for the most wins to open conference play.

Shepard and fellow senior center Skylar Spencer were on that record-breaking team two years ago.

“I try not to rank (my wins here),” Shepard said. “I just thank God every day that I step on the court and be out there with my brothers.”

That does not change the fact that this stretch is historic, especially when one takes into account how many great teams head coach Steve Fisher has coached in his time in SDSU.

Junior forward Matt Shrigley, who played his first game of the season against Utah State on Jan. 23, 2016, is still looking for his first made field goal of 2016 campaign.

The forward took five shots against the Lobos, all from beyond the 3-point arc, and all five were misses.

He had his best opportunity to nail his first shot in a span of 1:17 in the second half where Shrigley took three 3-pointers, with each one coming up short.