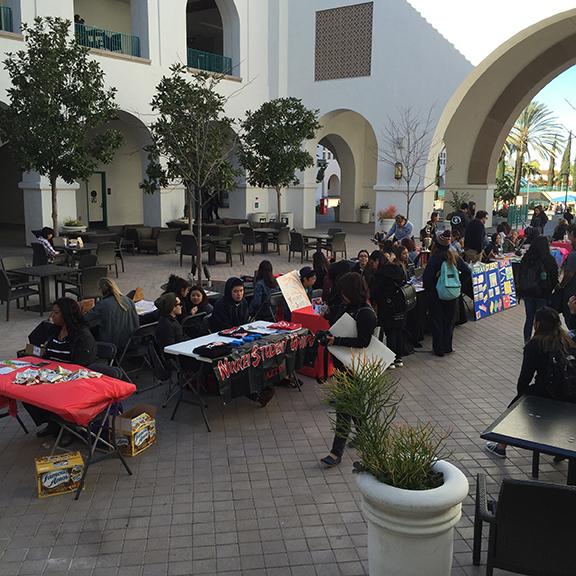 Spring Into Diversity, a two-week series at San Diego State which addresses some of the issues faced by marginalized groups, kicked off Monday, Feb. 1, and continues through Thursday, Feb. 11.

In previous years, Spring Into Diversity was a one-day event.

“We thought (a two-week event) would be the best way to have the people in these communities share their opinions on the topics,” said Arnelle Sambile, Associated Students student diversity commissioner.

The series continues with the Our Black Experience and Intersectionality & Privilege on Wednesday, Feb. 10, and Thursday, Feb. 11, respectively.

While the specific organizations were in charge of their workshops, all the events were overseen by Sambile and Christy Quiogue, director of intercultural relations and adviser to the SDC.

The Diversity Fair on Monday, Feb. 1, showcased 16 organizations on campus. Booths informing students of upcoming events for the semester were set up in the Conrad Prebys Aztec Student Student Union courtyard.

Many of the booths handed out pamphlets, business cards and giveaways. The booths also had email sign-up sheets for students who were interested in receiving the organization’s newsletters.

At the workshop students examined the role that each individual plays in the voting process, both on a college campus and in their larger community.

They had a discussion afterward about low voter turnout in minority and marginalized groups.

The Asian Pacific Student Alliance, Jewish Student Union, Students Supporting Israel and Native American Student Alliance organizations hosted the minority myth and cultural appropriation workshop on Wednesday, Feb. 3. Participants examined the model minority myth, which enforces the belief that other minorities should aspire to be like Asian-Americans and Jewish-Americans because they are often higher achievers. The myth was broken down and analyzed through multiple videos and discussions. The group also examined the way cultural appropriation affects each of their communities.

Katie Chanthakhoun, a member of the ASPCA, emphasized the importance of discussing cultural topics.

“I think it’s very important that, on top of workshops, we have these discussion opportunities because that’s really how we get to hear what we have experienced and genuine opinions, which I really liked,” Chanthakhoun said. “I think it was great that there were faculty members that were involved to help with the discussion as well. That’s always great to know that we have the support here.”

The gender identity, homophobia and rape culture workshop was presented by the Queer Student Union and The Women’s Resource Center on Thursday, Feb. 4.

The student-led panel explored the issues facing the LGBTQ community and their allies. Some of the topics discussed were misunderstandings on correct terminology, homophobia and transphobia. The discussion then turned to rape culture, specifically victim blaming, the gray area of consent and slut-shaming.

Veronica Avila, who is an LGBT studies major, found the event informative.

“I’m really glad that in our society today that topics like this are being brought up because even 10 years ago, stuff like this would have never been brought up,” Avila said.

At the end of each event, the groups discussed solutions to the topics presented.

While the events were successful in initiating discussions, Sambile spoke about some changes she would make for next year’s Spring Into Diversity.

Sambile said she wanted to get the faculty and administration more involved in the events. While the students appreciated the workshops were student-led, Sambile believes faculty contributing to the discussions could help improve them.

The Spring Into Diversity event continues through the week of Feb. 8, with events on immigration, violence against African Americans and privilege, among other topics.