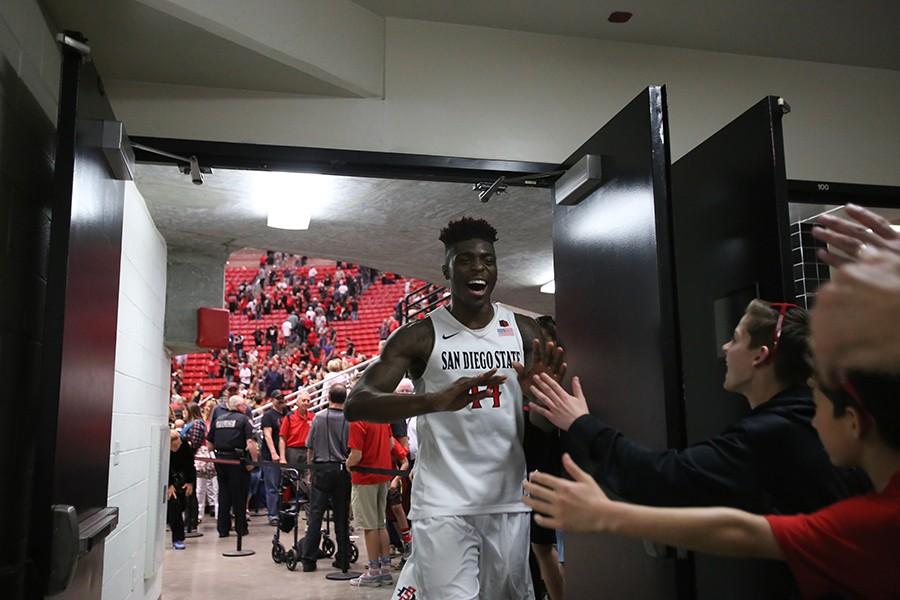 There’s no record that hasn’t been rewritten or nearly shattered since Steve Fisher has taken over the San Diego state basketball program, and that continued with the Aztecs’ win over University of New Mexico on Feb. 6.

The victory marked SDSU’s 11th straight win to open Mountain West play, surpassed the 10-game winning streak set by the 2013-14 Aztec squad and tied the MW record set by the University of Utah in 2004-05 for the most wins to open conference play.

Unlike the 2013-14 Aztec and the 2004-05 Utah teams, this year’s SDSU squad has walked a tightrope in MW play but has perfected the photo finish.

“I’m sure guys across the conference are saying, ‘Man, those guys are lucky,’” senior forward Winston Shepard said after the UNM victory. “But I don’t care if you go to Vegas, you’re not going to get lucky 11 times in a row.

“Credit our whole coaching staff and credit our team. We have no quit, no let-up, we don’t put our heads down and we don’t point fingers.”

Calling it “luck” may not be completely unfounded as this current SDSU group has almost been caught with its hands in the cookie jar on more than one occasion during its 11-game winning streak. In 10 of its 11 games it has either traded the lead or had the opposition come within one possession during the second half.

Seven of the 11 games have been within one possession in the final minute of regulation, including two overtime games. Four of the other five games came down to the last possession as the opposing team had a chance to either tie or win the game.

But when you still have the exact same coaching staff and the two current senior leaders — Shepard and senior center Skylar Spencer — who were also crucial parts to the 2013-14 team, there are bound to be similarities.

Over the two respective streaks both teams averaged 33.6 points in the paint and the 2015-16 team is only slightly better on the offensive boards, with a one-rebound edge (13.8 to 12.8).

Unfortunately, for the Aztecs, this trend holds fast even on their perimeter shooting as neither team was efficient from 3-point range. The 2013-14 team averaged 29 percent from beyond the arc, while SDSU currently shoots 26.8 percent.

“I try not to rank (my wins here),” Shepard said. “I just thank God every day that I step on the court and be out there with my brothers.”

It is probably even harder for Shepard to rank wins when they all blend into a similar formula for success.

This win streak also extends the Aztec dominance in this decade, as five of the six teams have gone on a double-digit winning steaks.