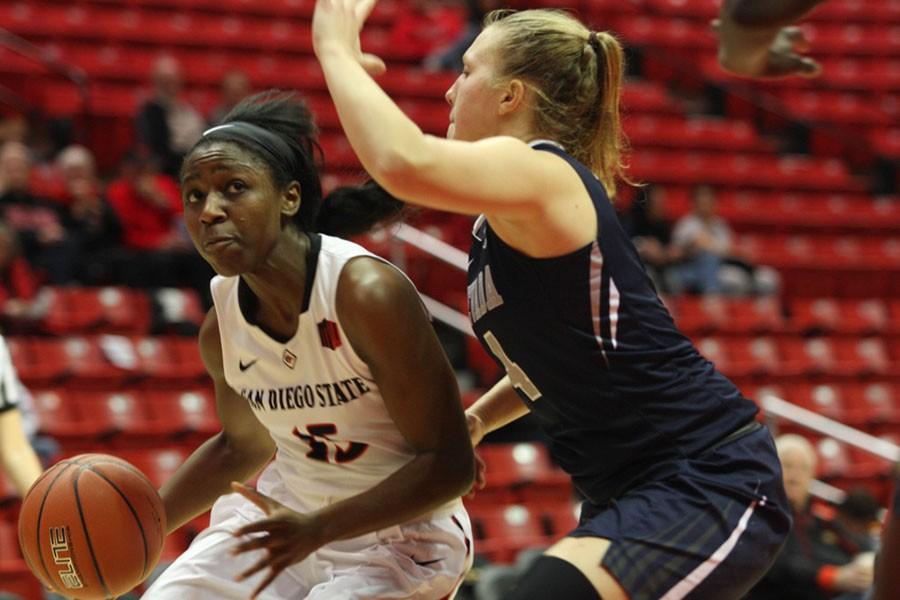 That is something San Diego State women’s basketball hasn’t been able to say since Dec. 30, but that changed with a 65-54 double overtime win over Fresno State Wednesday night.

It was exactly the kind of game SDSU wanted.

Low-scoring, scrappy, 45 turnovers combined in the game and the team limited Fresno State to 32-percent shooting.

“This team has been prepared for this game long before it happened,” head coach Stacie Terry said. “Even in those losses we came back and we worked. … These are high-character kids and they’ve been doing everything they can to take advantage of these type of moments.”

The Aztecs started the game cold with five missed shots and six turnovers in their first 11 possessions. The Bulldogs jumped out to a 10-0 lead over the first 6:26, but the Aztecs finished the quarter with six unanswered points and trailed 10-6 after the first.

The Aztecs were unable to close the gap in the second period and trailed 21-14 at halftime. They held Fresno State scoreless for 4:25, but scored only two points over that stretch.

Fourteen was the Aztecs’ lowest first-half point total since it scored 16 points Jan. 2 in a 55-36 home loss against Utah State.

“Our first five is definitely a good defensive group and went we went with our scoring group they did a good job of giving us a lift,” Terry said. “It seems to be our thing to play from behind.”

SDSU doubled its halftime point total in the third quarter, scoring 14 points on three 3-pointers and five free throws to take a 28-27 lead heading into the fourth quarter.

SDSU led by five with 3:32 left and took a two-point lead on a baseline jumper by sophomore guard Lexy Thorderson with 26 seconds remaining. Fresno State responded just three seconds later with a backdoor layup by Faz Davalos to tie the score. Junior guard Ariell Bostick missed a jumper at the end of regulation and the game went into overtime.

Only four points total were scored in the first overtime and the teams entered double OT tied at 46.

SDSU saved all of its scoring until double overtime and put up 19 points in the period while holding the Bulldogs to eight points to grab a 65-54 win.

“I think we’ve just been through so much that we have nothing to lose,” sophomore guard McKynzie Fort said. “We always have fight in us. Sometimes it doesn’t seem like it shows, but when we get together in the huddles we know how to bring each other together and I think that really matters in games like this.”

Fort led the Aztecs with 22 points, 11 rebounds, five assists and she was 10 of 12 from the free-throw line.

The win was the first home win for SDSU against Fresno State since the Bulldogs joined the Mountain West in 2012 and its second win since snapping its nine-game losing streak against New Mexico State Saturday.

The Aztecs are now 2-0 in overtime and it was their first overtime game since a 63-57 win over University of Wisconsin on Nov. 29.

Davalos also leads the MW with 10 double-doubles and 210 rebounds.

She finished with 13 points, 16 rebounds and seven blocks.

SDSU heads to Colorado, for it’s next game Saturday at 5 p.m. against Air Force Academy, which is coming off its first win of the season.