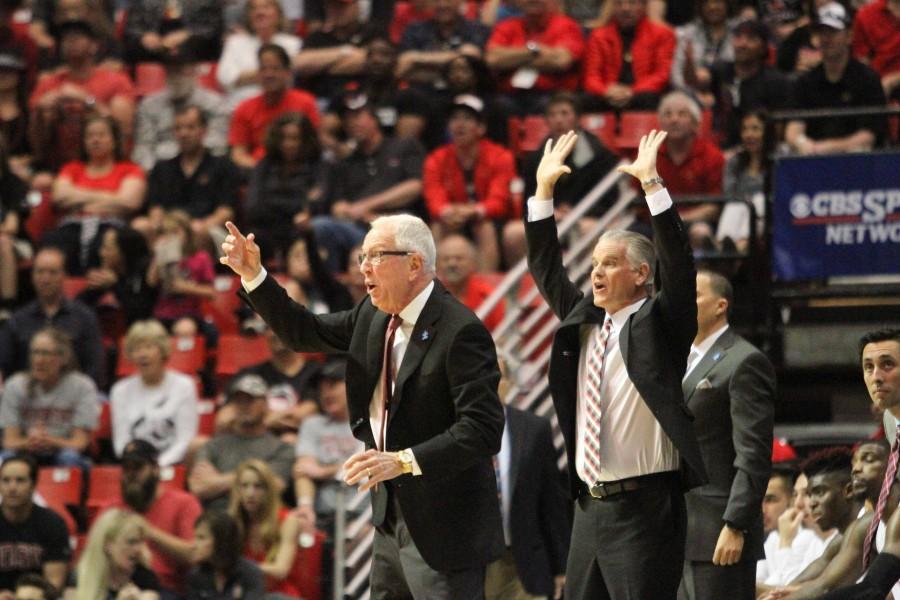 As the college basketball season approaches March and conference battles heat up like the weather in San Diego, news should be centered around bracketology predictions and fierce rivalries.

For San Diego State mens basketball, and the rest of the Mountain West, the focus has shifted away from the players and coaches and squarely on the conference and its referees.

The Aztecs’ game Saturday against Air Force Academy is hardly a blip on the radar, considering what the conference has had to go through in the last week.

It started last Saturday in SDSU’s game vs. University of New Mexico when the MW issued a statement following the game that said the referees incorrectly called an inbound violation that gave the Aztecs the ball and set up sophomore forward Malik Pope’s 3-pointer that sent the game into overtime and led to an Aztec win.

Then Wednesday night, Boise State University was robbed of what looked like a game-winning 3-pointer over Colorado State University from redshirt-junior James Webb III only to have it negated by the referees and the Broncos would eventually lose in overtime to the Rams.

Boise State coaches and players have understandably been outspoken regarding the shot ever since the call.

“Those are hard ones if you’re on the side like Boise was,” head coach Steve Fisher said Friday. “I would feel exactly the way they do.”

“It’s very unfortunate,” senior center Skylar Spencer said. “Things like that happen, but hopefully Boise doesn’t hang on to it.”

Even though it may seem like the sky is falling in the MW, the Aztecs still have a hefty first place lead, despite their loss to Fresno State University Wednesday.

No matter their lead in the conference, though, the team must still be scratching its head on how they let a game in which they let a double-digit lead slip away in each half.

“You look all over the country and leads are given up. We gave it up too fast,” Fisher said. “(Fresno State) was able to turn a 12-point into a one-point game too quickly.

“It happened for a variety of reasons, one was turnovers, but other things factored into it also.”

If there was a team the Aztecs wanted to see coming off a tough loss like Fresno State, it may just be Air Force, which is directly on the opposite spectrum of the standings, tied for last place with San Jose State University.

However, Fisher was quick to mention that the Falcons played the Aztecs tough when they came to Viejas Arena last season, but eventually lost 53-49.

The Falcons may not be the toast of the conference, but they’ve won two of their last three games, including one against Boise State.

“They’re going to get their shots,” Fisher said. “When they’re making their shots they can beat anyone, which is indicative of the two games they won recently.

A key matchup will be keeping Air Force junior forward Hayden Graham from “getting his shot” as he leads the team with 14.2 points per game and shoots better than 40 percent from behind the arc.

The toughest guard will again most likely come down to sophomore guard Trey Kell, who’s  had his hands full the last two games with redshirt-sophomore guard Elijah Brown from New Mexico and senior guard Marvelle Harris of Fresno State.

“He needs to see the ball go through the net in a game, and hopefully that’ll happen before I retire”

— Fisher on redshirt-junior forward Matt Shrigley, who’s still searching for his first basket since returning from an ACL tear on Jan. 23.