Warning to the Mountain West: Matt Shrigley has returned for SDSU basketball 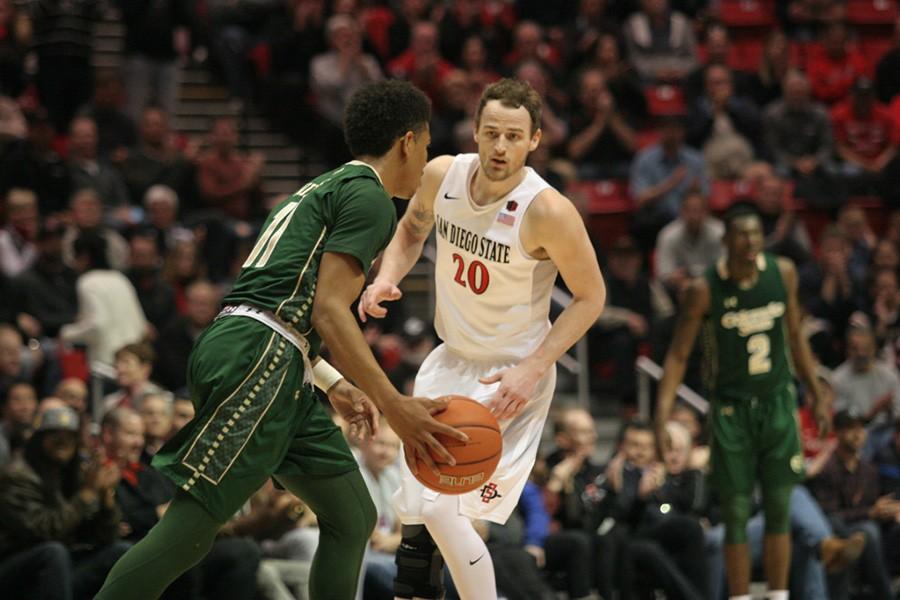 Following an 18-turnover effort and a one-point loss at Fresno State last Wednesday, the Aztecs needed to mix something up, they needed something different.

San Diego State had won three of its last four games by the skin of its teeth, narrowly escaping defeat thanks to a controversial call on an inbound play, and a freshman dribbling the ball off his leg.

On a night when starting freshman point guard, and the team’s leading scorer, Jeremy Hemsley,  sat out of the entire game due to a right foot bone bruise, the Aztecs needed redshirt-junior forward Matt Shrigley to reassert himself as a preeminent offensive threat.

And that’s exactly what happened.

“He was 4 for 9 and he made some timely (3-point baskets) early, and I think that helped other guys make theirs,” head coach Steve Fisher said after Saturday’s 70-61 win over Air Force Academy.

SDSU entered its Saturday night contest against Air Force shooting 14 of 63 from behind the 3-point line.

The Falcons opened the contest playing a zone defense and packing in the paint with defenders to negate the Aztec size advantage — the Falcons tallest starter was 6-foot-7  while SDSU started three players that were taller.

Two minutes after entering the game, Shrigley snapped an 0-for-13 3-point shooting streak and dropped his first 3-pointer of the season.

Over the next 54 seconds Shrigley dropped two more 3s, opening the game converting 4 of 5 3-point attempts.

With every 3, the crowd delivered a roof-busting roar.

The crowed needed this type of performance, but the team needed it more.

“Matt’s a basketball player that has proven in his tenure here that he can help this team,” Fisher said.

As the Aztecs approach their final five games of Mountain West play, getting Shrigley going couldn’t come at a better time.

Throughout the season, SDSU has only shot 29 percent from behind the 3-point line, tightly securing No. 337 in the country in 3-point shooting percentage — there are only 351 Division I teams.

This is precisely why SDSU needs Shrigley’s precise shooting.

As the Aztecs finish conference play and move onto the conference tournament — earlier this week media experts predicted SDSU needed to win to advance to the NCAA tournament — they need a reliable deep threat.

Hemsley leads the team by converting 35 percent of his 3-point attempts and sophomore guard Trey Kell is not far behind at 33 percent, but as Kell has demonstrated by shooting 1 for 11 from beyond the arc against University of New Mexico and 1 for 6 in the first half against Air Force, shooters don’t always make shots.

Shrigley gives the Aztecs another, and hopefully more, reliable option behind the 3-point line.

Don’t think they aren’t trying to reinvent a better zone that will force SDSU to launch more than its 39 3-point attempts last Saturday night.

Those teams watch closely, and they lick their lips waiting to get another chance to zone the top team’s offense, hoping that the Aztecs’ 3-point shooting will once again return to its oft-fickle form.

But on Saturday, instead of seeing the zone ruin the Aztec offense, they saw Shrigley, and suddenly the zone doesn’t look like a sure bet to keep the Aztecs off the scoreboard.