Pride Center assistant aspires to be the next dean 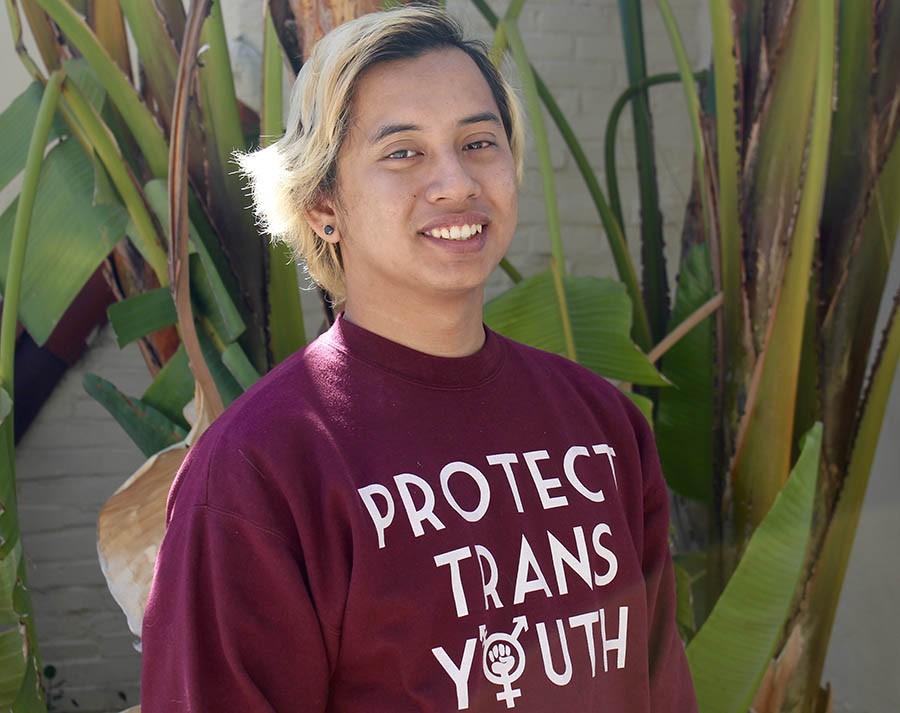 English senior Lou Tabalon works as an assistant at the Pride Center, serves on the executive board for the Queer Student Union and is a brother of Delta Lambda Phi social fraternity.

Tabalon identifies as transgender non-binary, which refers to any gender not exclusively male or female, and prefers to be addressed by the pronouns they, them or theirs.

“Traditional gender roles make me feel uncomfortable,” Tabalon said. “I’m still trying to figure myself out, but you know, that’s college. Nothing wrong with that.”

Growing up in the Philippines, Tabalon had always loved reading — especially J.K. Rowling ­—writing and storytelling. These passions fueled their desire to become an English teacher, an aspiration that changed after working at the Pride Center on campus.

After learning how college and programming in college worked, they realized their talents laid in student affairs. Tabalon has always admired Student Life and Leadership director Randy Timm and essentially wants to join the student affairs graduate program to become the next dean of students.

“I told (Timm) that I was gunning for his job and he said ‘see you in 20 years,” they said. “I don’t know where life will take me, but being able to work with him has really taught me a lot about myself and the business roles he takes on.”

Tabalon first started working as a Pride Center assistant when it opened in Spring 2014 with the main goal of creating programs based on student needs. They serve desk duty, create programs for Aztec Nights and facilitate discussions that concern students.

“We try to cater to the LGBT+ communities, particularity the ones that are not often mentioned like the bisexual and transgender communities,” they said. “We’re also trying to be more inclusive to the inter-sex community.”

On top of the Pride Center, they also serve on the executive board of the Queer Student Union, the largest queer-related board on campus. Tabalon originally served as president but stepped back from the position to focus more on them.

“I was trying to do a lot of things for a lot of different people, and it was leaving me physically, mentally and emotionally distressed,” they said. “The Queer Student Union is one of the few places that helped me grow as an LGBT+ individual, but I have the tendency to take on more than I can chew.”

“Lou is a charismatic leader that excels at making people feel like they are a part of the party,” graduate assistant of Student Life & Leadership Arthur Alvarez said. “Their big heart has contributed greatly to the development of The Pride Center.”

Tabalon also decided to become a member of Delta Lambda Phi, a gay, bisexual and progressive fraternity. Before crossing in Spring 2014, Tabalon suffered from depression and was in a very bad place in life.

“I told myself in October that if things didn’t get better by the end of the year, I would end my life,” they said.

Around that time, they met Wesley Palau, a brother of Delta Lambda Phi during the Safe Zones Coming Out Day panel. During this panel they heard Palau talk about his experience coming out as not only a queer individual but as a transgender individual.

“That day inspired me to be better for myself,” Tabalon said. “I wanted to be more active in my community and find out who I really was.”

Tabalon first became involved with the Queer Student Union, the Pride Center and Delta Lambda Phi after attending the panel. Upon receiving the job at the Pride Center, Tabalon officially met Palau and was stoked to discover they would be working together.

Later that spring, they decided to become a member of the fraternity, where Palau eventually became their big.

Tabalon never believed he would end up intertwined with student organizations and clubs but says being part of each group creates a new perspective.

“There was a lot in my life that got me depressed, upset or emotionally unstable,” they said. “I try to create safe space with the student body, that way no one has to feel the way I felt.”