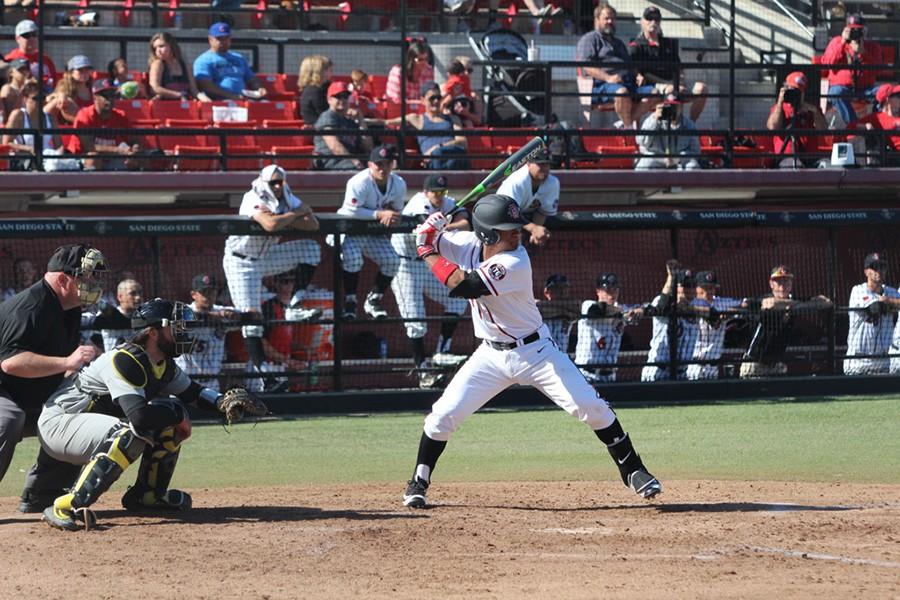 On Saturday afternoon, possibly carried by the momentum from the night before, the two teams began their outbursts early, and never slowed up, as SDSU dropped to 0-2 on the young season in a 10-5 loss to No. 14 Oregon.

Both the Aztecs and Ducks found their zone right off the bat, knocking in a combined 11 runs in the first four innings of the contest.

Oregon took the lead early, scoring one run in the first and two each in the second, third and fourth innings, giving them a 7-3 advantage.

SDSU briefly tied the game in the second inning, scoring three runs to lock the game at 3-3.

The Aztecs took a page from Oregon’s playbook, using savvy baserunning – such as when redshirt-senior outfielder Spencer Thornton reached second base on an error by sophomore second baseman Daniel Patzlaff – to get three runners across home plate.

Once again, SDSU made somewhat of a late rally, scoring one run on three hits in the bottom of the ninth, but it was all too little too late.

The Aztecs could not find an answer early enough for the Ducks’ attack.

Oregon in particular was taking aim at the fences, hitting two home runs, both to right field.

Most of the damage done by Oregon came off of the bats of its left-handed batters.

Of the eleven hits, ten were off the bat of a lefty, and of the nine rbis for the Ducks, eight were achieved by a left-handed hitter.

All run-scoring hits were driven to right field, including two home runs and two triples, a testament to the left-handed pulling power the Ducks showed.

“They have a lot of lefties, which is abnormal for us,” junior starter Cody Thompson said.”They hit their mistakes, which is what good hitting teams do.”

“They took advantage of every single mistake that I made,” Thompson said.”I struggled with command, and every time I left something up they turned on it and hit it.”

His replacement, junior right-hander Mike Diamond, did not fare any better, giving up four runs in three innings of relief.

For Oregon, freshman Kyle Robeniol tallied the win, as he replaced redshirt-sophomore Matt Krook for five innings, giving up one runs and five hits and striking out three Aztecs.

“We have to come out ready to play,” sophomore designated hitter David Hensley said. “I don’t think we’re too far behind, we just gotta work for it.”

The Aztecs will get one final shot at Oregon on Sunday afternoon in the closing game of the series.