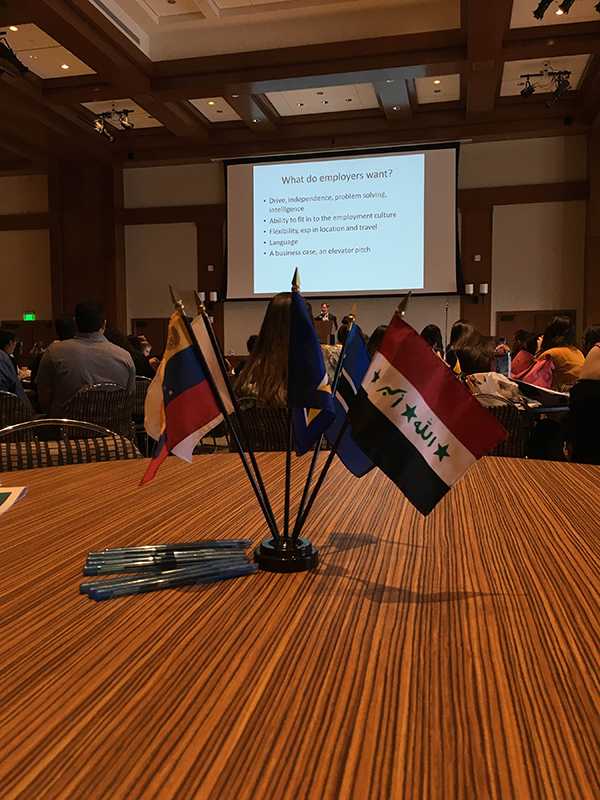 More than 100 students from across Southern California attended the Lessons From Abroad conference on Sunday, Feb. 21 at San Diego State.

The Lessons From Abroad program began in 2008.

This is the second time the conference was held at SDSU.

The event offered students an opportunity to debrief on their experience abroad, network with other students who have studied abroad, make connections with companies and nonprofits, and learn how to incorporate the study abroad experience in their career and life, said Amanda Chamberlain, SDSU study abroad advisor and co-chair of the event.

“I hope that students walk away feeling like they are ready to take that study abroad experience and do something with it,” Chamberlain said.

Hemphill, who is currently an advisor to two start-up solar companies, Wilson Solarpower and Glint Photonics, served as executive vice president and chief of staff to the CEO at AES, a global electric power generating and distribution company, and worked in several other  international organizations.

In his presentation, he discussed the skills students gain while abroad, such as increased independence, self-confidence, language capabilities, connections with people abroad and respect for different cultures.

He emphasized these skills give study abroad students a large advantage over other students entering the workforce, which he worries many students might not be aware of.

“My fear is that they won’t really capitalize on the value of their experience,” he said. “ I want them to walk away with a heightened sense of their abilities.”

Hemphill said about 10 percent of students study abroad and 25 percent of the U.S. economy is related to international business.

He encourages students to adapt to today’s global economy and take advantage of studying abroad.

“If I were king of the world, which seems unlikely, I would strongly recommend that anybody in college spend at least a semester outside their comfort zone,” Hemphill said. “Maybe that’s working with poor folks in Appalachia, maybe that’s serving wounded veterans in San Diego … there’s nothing like forcing yourself to learn new stuff in a challenging environment.”

During the presentation he also described how his own study abroad experience in Japan made him more independent, confident and adaptable, which he said helped him throughout his business career.

He recommends students who come back from their study abroad experience put it on their resume and “show it off.”

He also had some advice for students planning to go abroad.

“Don’t expect it to be the same as the United States,” he said. “It’s going to be different in a lot of little ways that you never would have thought … you need to be open to them and learn how to roll with them.”

And his last bit of advice:

After the presentation, students were shown “The Return,” a film created by a Chapman University student that depicts her experience with culture shock upon returning to the U.S. from studying in France.

Chamberlain said the majority of students who go abroad, particularly for a longer period of time, encounter culture shock when returning home.

“It’s actually a harder transition coming home than it was going to a new country because you change a lot when you study abroad and you don’t really realize how much you start changing,” she said.

International business senior Michael Tepper was among those students who dealt with culture shock.

“The first two to three weeks I was back I felt really weird,” he said. “I felt like a different person than when I was abroad.”

Tepper stayed in Brazil for eight months. When he returned home, he was impacted by the differences in lifestyles between Brazil and the U.S.

“I could do anything I wanted (in Brazil),” Tepper said. “I didn’t have to worry about time, I only had a few classes. Here you’ve got to plan everything out, I have to wake up at a certain time every day and I have to start thinking about my future.”

Cen Lam was studying in Guatemala during a shift in government. The dictator was taken out of power during the civil war in which Cen Lam said close to 300,000 people died.

“I saw a historic moment in Guatemala,” he said.

“I went there and I saw the protests about a new government and justice problems.”

He talked to several locals who had been affected by the massacres, including his own tour guide who was forced into the army and saw the killings first hand.

This experience led Cen Lam to reflect on the privileges he has in the U.S.

After the discussions, students had the opportunity to network with companies, nonprofits and study abroad opportunities that had booths scattered around the Lee Frank and Goldberg courtyard and attend a variety of concurrent sessions throughout the day.

The event wrapped up with a closing ceremony with raffled prizes and cookies.