SDSU students take diversity discussion to the next level 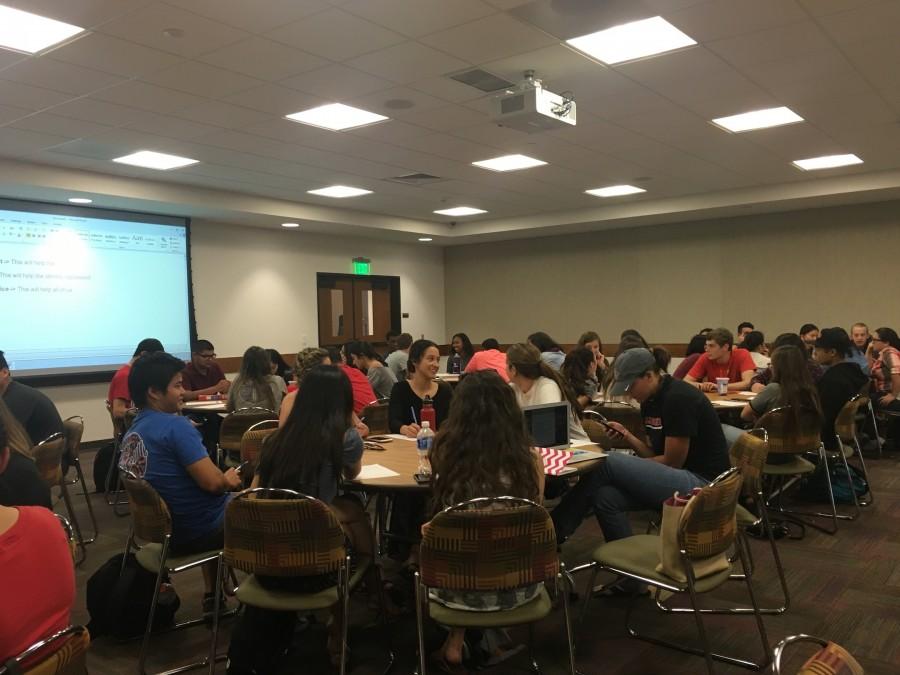 On Feb. 23, San Diego State students gathered in Templo Mayor for “The Next Level: Collegiate Dialogue” to discuss the importance of diversity on campus and construct ways to impact their community.

Many of the students who attended the event hosted by the One SDSU Community were either resident or community advisers.

“I always look forward to learning more about diversity, so I can be more involved and learn to help my community,” said sophomore Thuy Luu, resident hall advisor at Granada.

Residence hall coordinator Matt Hulett led the dialogue and talked about three concepts: the relationship between knowledge and understanding, locus of control, and allyship.

The conversation started off with a YouTube video by “SmarterEveryDay,” where engineer Destin Sandler presented a backwards brain bicycle. If the bike was turned left, it would go right and vice versa. The video also showed people across the U.S. attempting to ride the bike but failing to do so.

Sandler said that the purpose of the video was to demonstrate knowledge doesn’t mean understanding, and understanding is very difficult to change.

Hulett used the video as a metaphor for diversity today. He provided an example and said comprehending and grasping the concept of racism is not the same as being an African-American in America.

Students later came up with their own examples such as acknowledging the prejudices that Middle Easterners face, but not being able to comprehend and understand because they weren’t Middle Eastern themselves.

“This was a very valuable and important opportunity to learn, grow and transform,” said Christy Quiogue, director of the Center for Intercultural Relations.

“When students are challenged outside their comfort zone, acknowledge or recognize there are differences and listen to how others react and respond, they appreciate other cultures, customs and traditions,” she said.

Hulett introduced the locus of control concept, where students came up with examples of efforts they could make to control the events that affect them.

Each example was rated on a scale of 1-3. One indicated a simple objective they could perform tonight such as discussing some of the day’s topics with family members. Two indicated an action plan they could execute with other people, like starting a hashtag trend. Three indicated a collaborative effort that would take time and dedication, such as petitioning the local government for minimum wage increase.

However, Hulett pointed out that some activities were more difficult for others within their locus of control.

He presented another video consisting of a conversation between President Barack Obama and Ellen Degeneres.

Degeneres thanked Obama for what he had done for the gay community, and Obama responded by saying that he can make the laws, but people like Degeneres “change hearts and minds.”

The final topic Hulett discussed was being an ally. He provided a chart describing three types of allyship: ally for self- interest, ally for altruism and ally for social justice.

This allowed students to think of different ways they could help their community and be an ally for social justice.

“Though there are a lot of differences in personalities, ideas, cultural backgrounds and perspectives, there are also similarities,” Quiogue said. “We all have a shared humanity.”

The event ended with students writing a reflection about the concepts they learned and a list consisting of the community goals they hoped to reach by the end of the day, by the end of the semester and in five years.

“Events like these motivate (students) and encourages them to do something,” Quiogue said. “These kinds of dialogues and experiences help students think outside of themselves and about helping others.”