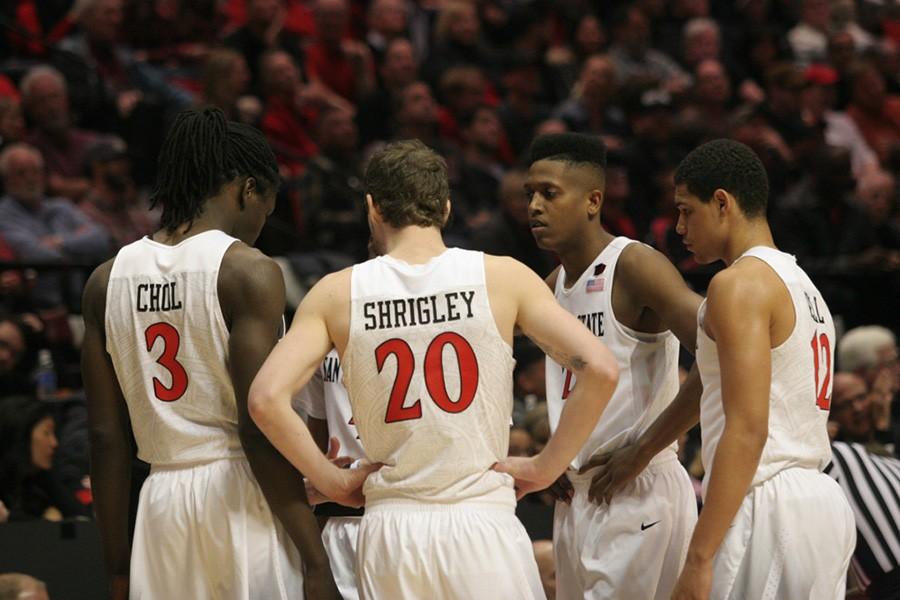 At over 7,000 feet above sea level, senior forward Winston Shepard said that playing at University of Wyoming presents a mental challenge.

It’s the kind of challenge he lives for.

“Being the player that I am, I love anything that can give me that extra boost or motivation to help me play my best,” he said Monday.

What may be a tougher mental challenge, is wrapping ones head around the fact that with a win at Wyoming Wednesday night, the Aztecs will  have a chance to clinch the Mountain West regular-season title outright.

Yes, it’s like listening to a broken record when bringing up the the six losses in the nonconference. But if anything, it’s a credit to the program’s success in the past that it is held to such a high standard.

The conference-clinching win, though, won’t be a cakewalk.

As Fisher brought up Monday, the team is aware of the struggles they’ve had playing in Laramie, Wyoming, in past seasons.

The team has lost two out of its last three trips out there, including a nine-point first half effort in the 2012-13 season.

Besides the elevation and venue, the Aztecs will need to contain one of the hottest players in the MW, senior guard Josh Adams.

Adams is coming off a 37-point performance in the team’s win last Saturday and drained a school-record nine 3-pointers in the game.

But Fisher knows he’s more than just a 3-point shooter.

“It will be a challenge for us. It will not be one man, we will switch different people on him.”

Shepard knows what it’s like to come close to netting a triple-double too. In the team’s win over San Jose State last Sunday, he had a team-high 17 points, while also adding seven assists and seven rebounds.

He was in such a groove he wasn’t aware of how close he was to the triple-double during the game.

“(Coach Brian Dutcher) told me. He told me a little bit too late,” he said with a smile.

After missing the team’s entire win over Air Force Academy on Feb. 13, freshman guard Jeremy Hemsley came off the bench against San Jose State and scored 13 points in 22 minutes.

Fisher still wasn’t sure, though, of the health status of his point guard.

“We will be very cautious with what we do with him today and tomorrow as we move forward to Wyoming. I don’t have an immediate update about his health status,” he said Monday.

Tip-off for tonight’s game is scheduled for 7 p.m. at the Arena-Auditorium in Laramie. The game can be seen on CBS Sports Network or heard on The Mighty 1090 AM.

Following along @DAztecSports and @TheDailyAztec for live updates and postgame coverage.