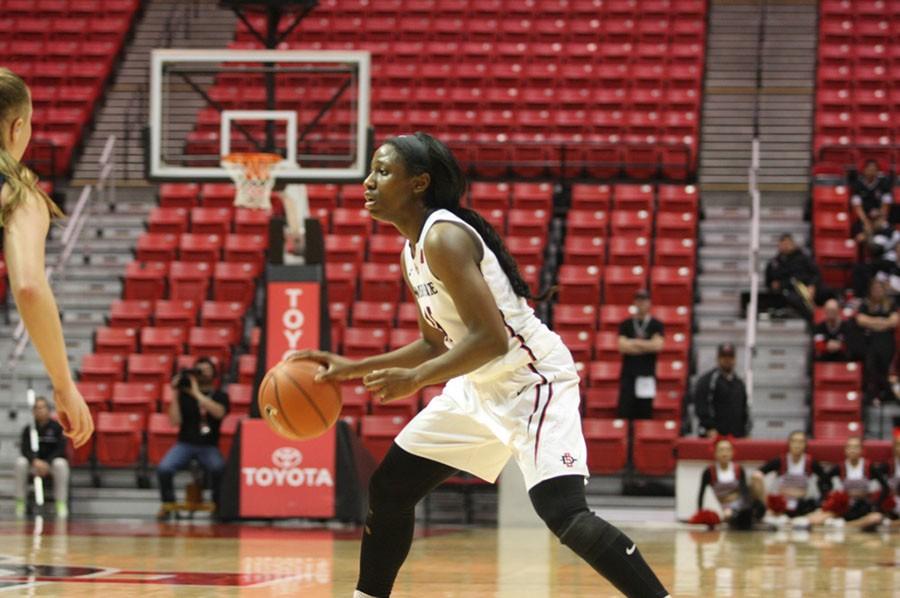 To say this season has been up and down for the Aztecs would be an understatement.

After a three-game win streak to end December, the Aztecs dropped nine straight in January then won four straight in February before beating University of Wyoming 54-40 Wednesday for its fifth straight win.

Third-year head coach Stacie Terry said a big part of the win streak has been senior forward Deidra Smith’s impact in the middle.

“(Smith’s presence) has allowed us to score more points, it has allowed us to play better defense, it has opened up shots for our three-point shooters and now everyone is just falling into their role,” Terry said. “It took us a little longer than I would have liked, but this is really what it looks like when everyone’s doing what they need to do.”

Smith entered the game shooting 59 percent from the field in the last eight games.

She finished with 10 points and 5 rebounds on 4 of 8 shooting.

SDSU started the game slow offensively and trailed 12-6 after the first quarter after shooting 15 percent in the period.

The Aztecs flipped the script in the second quarter and scored 10 points in the first 5:07 to gain a 16-14 lead.

“That’s kind of who we are,” Terry said. “We always seem to get out to a slow start in the first quarter and in the second quarter we kind of fall into our rhythm and pick it up.”

SDSU didn’t look back from their and held the Cowgirls to a scoring drought of 6:59 and ended the quarter on a 14-0 run over the last six minutes to surge to a 24-14 halftime lead.

Both teams traded baskets in the third quarter, but the Aztecs extended its lead to 13 by shooting 58 percent in the period and the score stood at 41-28 entering the fourth quarter.

With seven minutes left in the fourth quarter, Smith got a steal and took the ball coast-to-coast to give SDSU a 16-point lead.

“I stole the ball, I was looking for somebody to pass to and nobody was around,” Smith said. “I felt like Shaq.”

Senior guard Ahjalee Harvey finished the game with 16 points on 7 of 14 shooting and 8 rebounds.

She said the team’s loss to San Jose State on the road was the turning point of the season for her.

“That’s when we kind of banded together. I think after that we had a talk and after that moment we became closer as teammates off the court which has translated to on the court,” Harvey said. “We have much more trust in each other and the transition from losing to winning became easier.”

SDSU held Wyoming senior guard Marquelle Dent in check with nine points and went 3 of 15 from the floor.

The Aztecs were coming off an 87-70 win over San Jose State, their best offensive performance of the season besides an 84-point performance against Wyoming earlier in the season.

“I don’t know why we are streaking now,” Terry said. “The difference is we’re just able to finish games now and I think (the team is) buying into our defensive concepts.”

The Aztecs shot 45.8 percent from the field and had a season-high 20 assists while committing eight turnovers.

The Aztecs entered the game in eighth place in the Mountain West half a game ahead of Wyoming, a game behind Utah State and a game and a half behind UNLV.

SDSU heads out on the road next to face Boise State at 1 p.m. on Saturday.