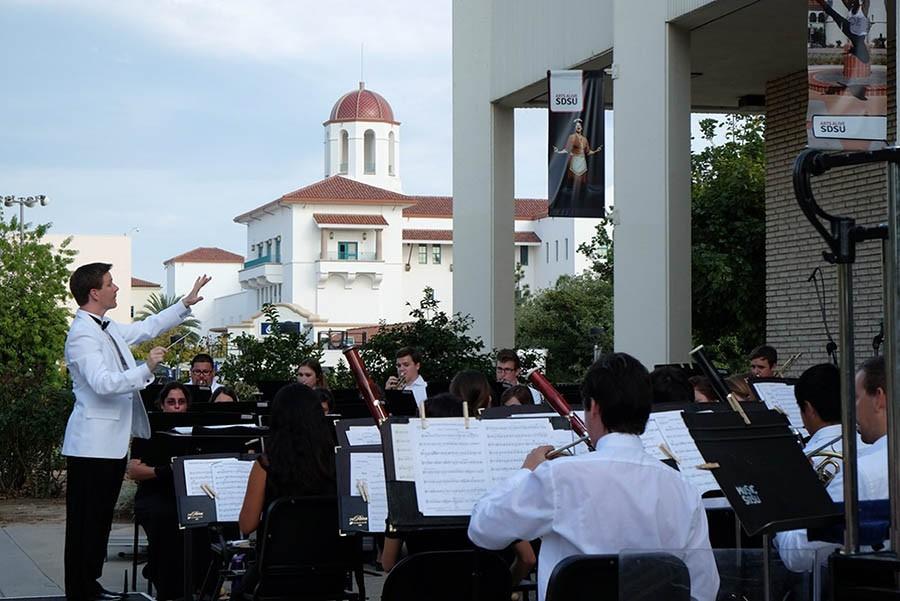 Courtesy of SDSU School of Music

For those looking to play in a classical band, San Diego State’s concert band is open for anyone looking to join.

There is no audition necessary, and the band’s skill level varies with each semester’s class.

This is the perfect opportunity for those who have always wanted to learn and play an instrument in a band, or even for those experienced to switch over and learn a completely different instrument.

Though students are expected to keep up with practicing, the environment is more relaxed as fellow students have similar playing abilities.

“For anybody on campus who wants to play an instrument, who doesn’t want to audition, (it is) less time commitment than other groups,” concert band director Abbie Weaver said. “There’s a very neat energy in room, everyone is just excited to be there.”

Above concert band is symphonic band, an option open to all majors and requiring an audition for which students must perform more advanced pieces.

This is the first year SDSU has had three classical bands. An additional class was started as a result of rising student interest throughout the years.

“(SDSU’s band) has been growing every year over the past five years, and we’re excited with how big we’ve become,” director of bands and music professor Shannon Kitelinger said.

MUSIC 105: Introduction of Elements of Music

Students can also learn the fundamentals of music theory in Introduction of Elements of Music.This introductory course covers the basics of music, from terminology to rhythm and everything in between.

Music theory is a convenient and broadly applied skill. A solid foundation can help students whether they’re jamming in the garage with friends or messing around in FL Studio to make a song.

SDSU also offers a course in composing music. Introduction to Electro-Acoustic Music allows students to get hands-on experience in the lab to create music electronically.

By working in digital audio workstation Ableton, students can learn the basics and fundamentals of mixing and digital sequencing to create their own music.

On top of those listed, the choir and athletic bands are also available for students to join.

SDSU music has many avenues for students to join and create something great. Students thinking of dipping their feet in anything music-related — take a chance and jump in.