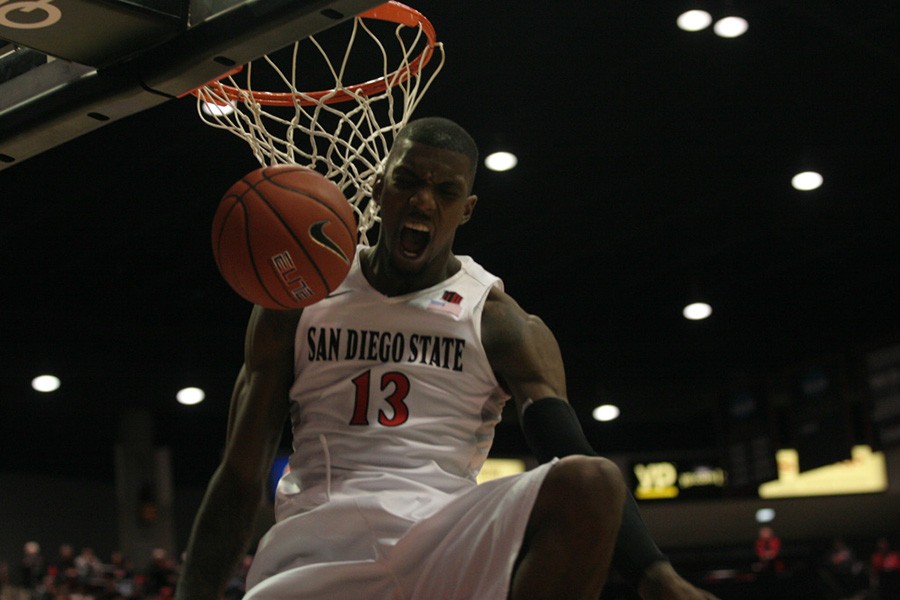 With the Mountain West regular season title already in its back pocket, San Diego State men’s basketball still has a lot to play for, starting Saturday when it will look to avenge last season’s lone home loss to Boise State.

“I remember it like it was yesterday,” sophomore guard Trey Kell said. “We had a chance to win the title and lost … It’s just one of those games that we want to get back at them.”

BSU heads to Viejas Arena with uncertainty surrounding its star forward James Webb III, who suffered a sprained MCL against UNLV on Tuesday, and will be a game-time decision. The redshirt-junior is averaging 16 points on 49.4-percent shooting and 9.4 rebounds per game.

The 6-foot-9 forward’s offensive production is only a portion of his game and if he is unable to lace up Saturday the Broncos will have a big hole to fill on the defensive end. Webb is not only leading the team with 40 steals this season, but his large frame, quick feet and active hands can disrupt whoever he is guarding.

“We prepare like Webb will be playing,” head coach Steve Fisher said. “Obviously if he can’t play it takes a big chunk out of who they are … You look at his numbers and he is very, very talented and has been a big part to what they do.”

Regardless of Webb’s availability, BSU has to prepare for a revamped Aztec offense that has scored at least 70 points in their last three games and won each one by at least nine.

Senior forward Winston Shepard has raised his level of play since SDSU’s loss to Fresno State on Feb. 10. The vocal leader for the Aztecs has done a little of everything for SDSU as he’s averaged 14.6 points, 5.7 rebounds and five assists in the last three contests.

The Aztecs’ increase in offensive production has benefited from the growing confidence of  sophomore forward Malik Pope and redshirt-junior forward Matt Shrigley.

Pope has reached double digits in two of the last three games, including his first double-double of his career against San Jose State with 17 points and 11 rebounds.

However, the unknown and ongoing story surrounding the Aztecs has been the health of freshman guard Jeremy Hemsley, who suffered a bone bruise on his right foot against the Bulldogs.

“We are optimistic that he will play, but we are waiting to see how he moves around today with what little we’ll have him do,” Fisher said. “Whether he starts or not, I’m uncertain of that. We are hopeful that he will be able to play.”

After sitting out against Air Force Academy, Hemsley has provided a spark off the bench in the last two games while battling his injury.

SDSU will look to blackout Viejas Arena, as the Aztecs will wear their black uniforms at home for the first time in the Steve Fisher era.

How to tune in

Tip-off for Saturday’s matchup is scheduled for 6 p.m. and will be broadcasted on CBS Sports Network and on The Mighty 1090 AM.