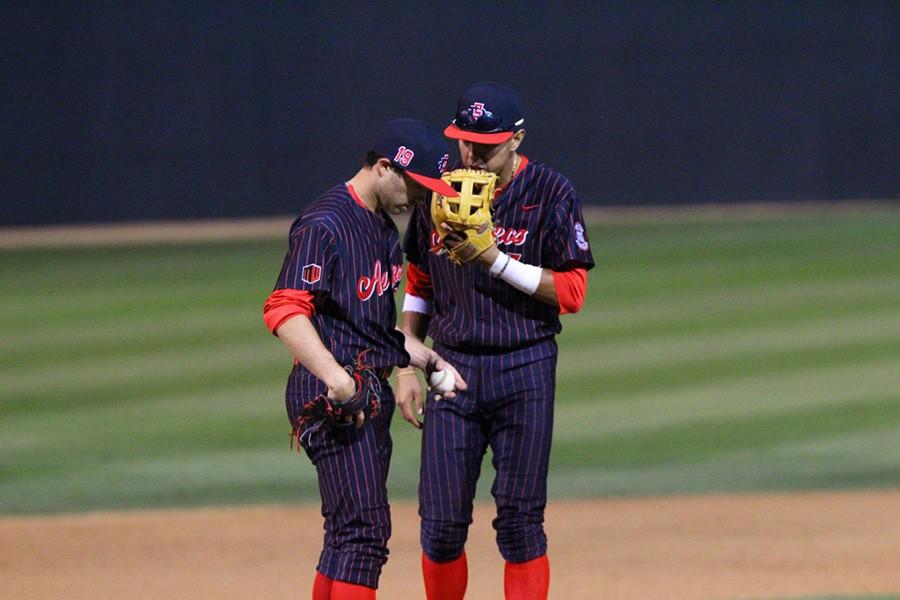 In a third consecutive disappointing performance, San Diego State Baseball was picked apart by University of Kentucky in a 6-0 loss, ending its short-lived appearance in the Tony Gwynn Classic.

SDSU was outscored 16-2 in its first game of the tournament, losing both games at Tony Gwynn Stadium.

The Aztecs were held to two hits in the loss against Kentucky, their lowest tally of the season.

The Wildcats were held to only four hits but, unlike SDSU, got the most out of those hits, cashing in for six runs.

Three of those came on one swing by sophomore shortstop Riley Mahan.

Mahan unleashed on a 1-0 pitch from redshirt-junior right-hander Cody Thompson, sending the offering over the right field wall and breaking the scoreless tie in the bottom of the fourth inning.

The home run came with two outs, bringing the total number of two-out runs allowed to 18, a total that was added to later in the contest.

“Our guys are a little too fine,” head coach Martinez said of his teams’ two-out pitching, “trying to be a little too perfect instead of just pitching to contact.

“It’s more about our guys being more aggressive in the zone and quit trying to be so cute.”

Kentucky continued to capitalize in the seventh inning when sophomore first baseman Evan White drove in two Wildcats on a two-out double.

White later made it across home on a dropped fly out by sophomore center fielder Chase Calabuig, extending the Aztecs’ deficit to 6-0.

While Kentucky capitalized on countless mistakes made by SDSU, the hosts of the Tony Gwynn Classic have been unequivocally unable to utilize opportunities, going 0-9 with runners on base in the contest, and 2-21 throughout the tournament.

Along with their offensive woes, which Martinez says boils down to their youth, the Aztecs are failing to make fundamental plays.

One such play was when junior shortstop Alan Trejo had a shot at the double hit by White, but whiffed on the ball, allowing two runners to score.

“That play has to be made,” Martinez said.

SDSU had very few chances in the game, but one such play came in the sixth inning, as redshirt-senior right-fielder Spencer Thornton, wearing No. 19 in honor of Tony Gwynn, singled with one out.

But they once again drank spoiled milk, as the Aztecs fell into a double play when senior third baseman David Hensley struck out for the third time of the evening, as Thornton was caught attempting to steal second base, ending the inning.

Kentucky senior starter Dustin Beggs (2-0) had his way with the Aztecs’ lineup, striking out 10 batters in eight innings on the mound, lowering his ERA to a minuscule 0.64.

“There’s a reason he’s pitching on the weekend in the SEC,” Martinez said. “That guy kept us off balance every pitch, located his fastball and his slider was a knockout pitch.

“Offensively, we ran into a buzzsaw tonight.”

“We’re going to continue to grind and embrace the process, ” Martinez said, ”that’s all we can do. The season is not going to stop because we’re not doing well.

“We’re going to meet it all head on, and deal with it.”

The Aztecs will get another chance to make amends when they face University of Arizona Sunday afternoon.