Chicana and Chicano studies freshman fights for representation with music 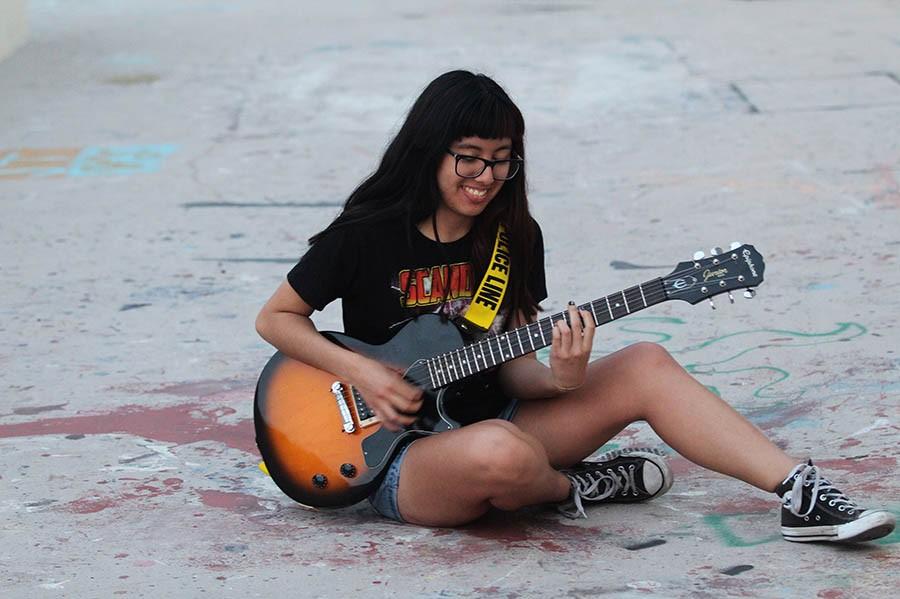 Martinez is a budding musician and leader on campus, involved in organizations, such as A.C.H.A. and M.E.Ch.A, with the goal of educating her community on intersectional issues.

When she’s not fighting injustices, Martinez likes to wind down with the electric guitar. She enjoys playing music influenced by rock and punk artists such as Flyleaf, Scandal and Babymetal.

“Music is a way for me to take a break from everything that tires me out in the world,” Martinez said.

“Being politically conscious takes a lot of energy out of me, and when I play music, I don’t have to think about that, even though it is crucial to me.”

Martinez started to play guitar at the age of 12 after watching the music video for Orianthi’s, “According to You.”

That was the first time she had ever seen a girl shred on the guitar, which motivated her to pursue music on her own.

The musician delved into music first with the acoustic guitar but found her passion lies in riffs and loud amps with the electric guitar.

By the time she was in high school, she found herself involved in an after-school program called After School Rock Band. The program met twice a week in an art room where students learned how to properly set up and tear down music equipment. Their performances mostly took place at school and community events where the group would play cover songs from bands such as Bon Jovi, The Cranberries, and even Tejano singer Selena.

Being from the Los Angeles area, Martinez was inspired by the buzzing music scene and the community around her. However, the lack of diversity made it hard for her have Chicana role models in music growing up.

For many people of color who make their way into the arts, this lack of diversity is an issue that comes with a feeling of isolation and huge under-representation.

“It’s rare to see brown women making a name for themselves in rock and punk music mostly because of its foundations are made up of white (straight) men,” political science junior Sara Mielniczenko said. “As a student of color and musician, I look up to women of color who continue to pursue the arts when there’s so little of us. It gives me hope.”

As for her future in music, Martinez hopes to form an all-girl Chicana radical and political rock band.

“I don’t feel represented,” she said. “There’s not that many women of color you hear about. It’s mostly white women that you hear about that (are) pretty badass too, but that’s why it’s important to me to pursue my musicianship. Que viva la mujer.”