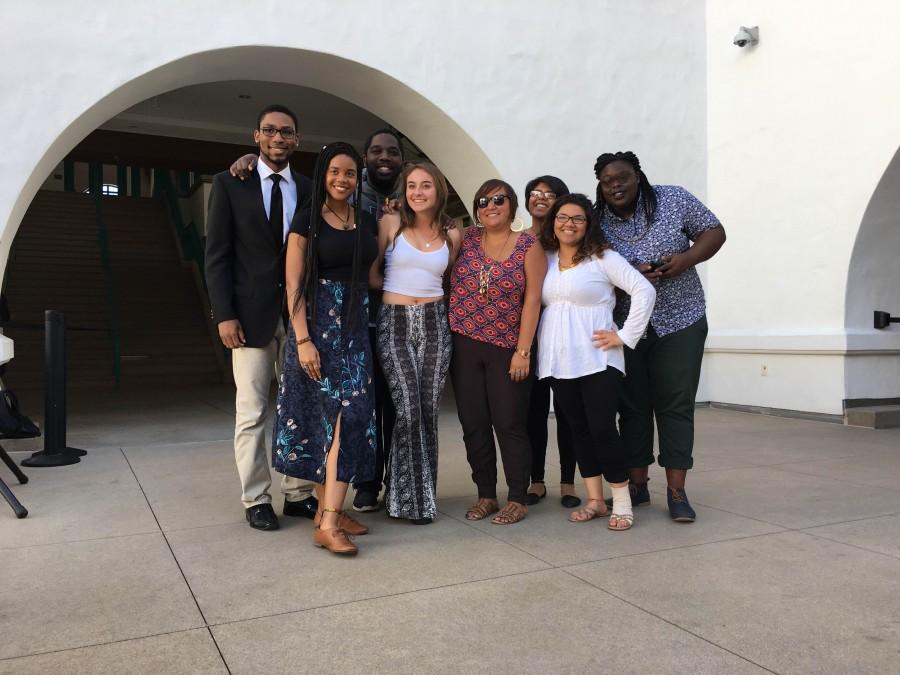 The event aimed to promote the expression and opinions of individuals of color through the artistic expressions of poetry and spoken word.

“I believe it’s important that we’re providing spaces for students of color to have their perspectives and experiences supported,” event coordinator and SDSU graduate student Teresa Reiko Perales said. “We’re hoping to do that by providing a mic and a stage to bring the voices … of students and people of color here on campus.”

The performance kicked off with students of various backgrounds going on stage to present. Their poems discussed injustice, self-identity and their inner thoughts and experiences. Original pieces, poems in different languages and work from poets the students admired were presented.

Among the student performers was theater performance junior Carter Piggee.

In his poem, Piggee spoke of the identity crisis he experienced in high school and how through reflecting on his “roots” and writing he found himself.

“I considered myself invisible for a while,” Piggee said. “I’d just sit in the back and be in my own little bubble, but when I do poetry, when I’m on stage, when I have that microphone I’m not that person anymore.”

After performances from Piggee and four other students, Olayiwola took the stage.

She began with the poem she performed in the 2014 National Poetry Slam Championship entitled, “To Rekia Boyd,” a piece dedicated to the 22-year-old African-American woman who was shot and killed by off-duty police officer, Dante Servin, in Chicago in March 2012.

According to CBS News, Servin was found not guilty in April 2015, sparking protests around the city. Olayiwola believes the protests had meager turnouts compared to similar incidents where the victims were males.

“I guess all the protesters got tied up,” she said, scanning the crowd. “I guess all the black folks were busy making signs saying stop killing our black boys. I guess no one hears the howling of a black girl ghost in the nighttime. We stay unheard.”

Olayiwola calls out to her fellow people of color to acknowledge the death of black women and give them the attention they deserve.

She recited several pieces and as she spoke, the audience slowly began to grow. The people stared intently, nodding their heads to the rhythm of her words and occasionally snapping and clapping.

Through poetry, the audience engages with the speaker. Unlike with written word, poetry creates a connection with the listener and prompts participation through the form of analyzing what is said and forming an opinion on it, Olayiwola said.

“Poetry by definition is the expression of thoughts or emotions,” she said. “Thoughts and emotions are things that almost every single human has. It’s naturally more relatable.”

One specific moment of Olayiwola’s performance seemed to resonate with the audience.

“One black boy down, two then three,” she slowly sang.  “How many dead n-ggas do you see?”

She eerily repeated the phrase over and over again between reciting haikus. The courtyard was silent.

The event concluded with a final piece by a student performer and a group photo of all the participants.

One SDSU Community’s next event will be “Week of Caring,” which will run from Feb. 28 to March 5 in the residence halls.