Alumni rock band wilds out with raw energy and angst 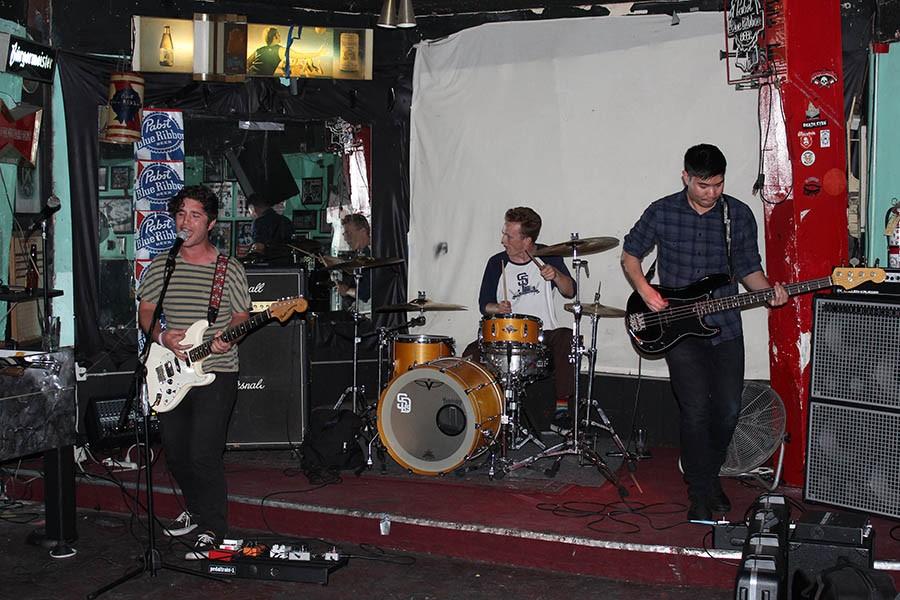 “For the record, I got catfished,” bassist Andrew Loc said about the band meeting on the dating site, ChristianMingle. “I thought I was meeting a hot chick and (Franco) shows up with his guitar and is like ‘So we gonna jam, or what?’”

Although the band didn’t actually meet on a dating site, the band’s lead singer and guitarist, Franco Rakigjija, admitted to finding Loc through Craigslist last March.

“San Diego’s a desperate scene,” Rakigjija said. “A man’s gotta do what a man’s gotta do to find musicians. Don’t be ashamed to use the Internet, kids.”

After the band’s loud and energetic set at Tower Bar in City Heights on Tuesday, Feb. 23, the playful banter between Loc and Rakigjija wasn’t totally unexpected.

Loc and Rakigjija make up The Hand of Gavrilo along with drummer Declan Halloran, who also played with one of his other bands, Pumphouse, that night.

The band, which gets its name from Gavrilo Princip — the man who infamously assassinated Austria’s Archduke Franz Ferdinand — is a mash-up of multiple genres. Through hard rock, metal  and grunge coupled with lyrics full of angst, the band aims to evoke emotion from its listeners.

“The music is heavy, it’s rock,” Rakigjija said.  “We’re just a band with a lot of pent-up anger trying to let it out onstage, but in a good way. If (our music) doesn’t make you feel anything, then we’re not doing our job.”

Rakigjija, who graduated from SDSU in 2012 as a recreation and tourism management major, has always had a knack for music and writes most of the band’s material. He was stoked to start The Hand of Gavrilo, his first official band, after recruiting Loc and meeting Halloran, an SDSU sociology senior, at Soda Bar in Normal Heights.

As a band just breaking into San Diego’s eclectic music scene, The Hand of Gavrilo is working on perfecting its craft in order to bring listeners the best show possible.

Rakigjija said the band’s first priority is the music, but he hopes the band can network and book more shows with bands that share a similar aesthetic.

“I feel like hard rock is something that most people just aren’t keen to seeing,” Rakigjija said. “San Diego’s a very mutant-like place. It’s very segmented, and there isn’t a lot of connection in the scene.”

The band is working on getting its name out in the San Diego and Los Angeles areas, as well as Tijuana.

During the past year, The Hand of Gavrilo has become a tighter unit as a band and now plays music with each other as more than just bandmates but as friends.

“We try to have fun but also play with intensity because (our music) is art for us,” Rakigjija said. “We put a lot of time into it and we want to showcase what we spend all of our damn time doing.”