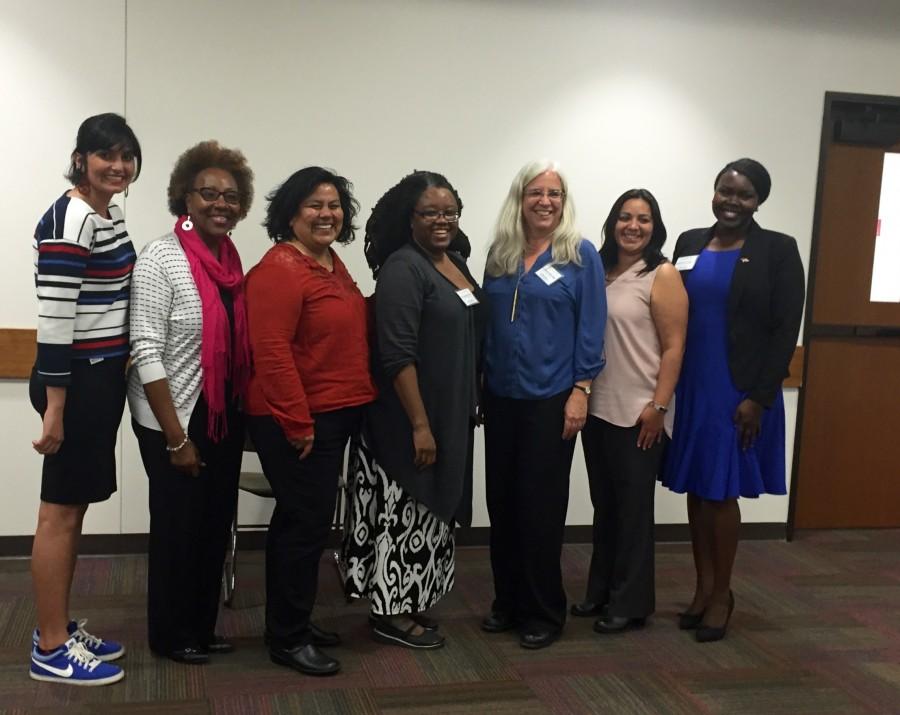 SafeZones, The Women’s Museum of California and the SDSU Sexual Violence Task Force were a few of the community organizations in attendance offering research opportunities to students and over 160 attendees.

“A lot of it is focusing on what we’re doing for the symposium by connecting organizations with students to do collaborative research projects,” Kimala Price, co-director of Bread and Roses and women’s studies professor. “This is the second symposium we’ve done and we plan to some iteration of this in future years. We also are trying to develop some research projects as well.”

“We had the right to choose any legislation or activity,” said Sevil Salman, a women’s studies major enrolled in the WMST 530 class. “I worked on the minimum wage increase in San Diego. We think that half of the minimum wage earners are women in California, and it’s not only affecting college students.”

Bread and Roses is the center for feminist research and activism on campus created to “promote feminist creativity, scholarship, and community engagements in support of the women’s movement,” according to the center’s official website.

Price said  changes were made to this year’s symposium to accommodate students looking for opportunities to get involved in areas other than research.

“The difference to this year’s symposium is that you still had the research projects,” Price said. “But we also wanted to expand to it to focus on the writing as activism and the politics and organizing work because last year we had a lot of students who weren’t necessarily feel like they could do research projects but they still wanted to get involved in community groups.”

The event consisted of four different breakout sessions: Research Opportunities with Local Organizations, lunch and an International Women’s Day poster session with tabling organizations, Writing as Activism and Getting Active: The Election and Beyond.

“It’s been a bombardment of information,” ISCOR freshman Jessie Dicktor said. “There’s so many things I need to change and so many inspiring people. I just want to go out and change the world. There’s people fighting for women’s rights and it’s inspiring.”

Two San Diego State alumni running for local office, Rebecca Paida and Nassim Moallem, were presented during the “Getting Active: The Election and Beyond” session.

The event was co-sponsored by The President’s Leadership Fund, the Department of Women’s Studies, Planned Parenthood of the Pacific Southwest and Deb Carstens, who is the principal of Carstens Family Funds and attended SDSU.

“I really think there is a need,” Price said. “We do have a core of student who are very active on our campus working through SafeZones and Planned Parenthood Generation Action, but there still are a whole lot of students who really have the passion and really want to be involved.”

Representatives from the women’s studies department plan to participate in the upcoming International Women’s Day March and Rally on Tuesday, March 8 in Downtown San Diego to show support for community activism.