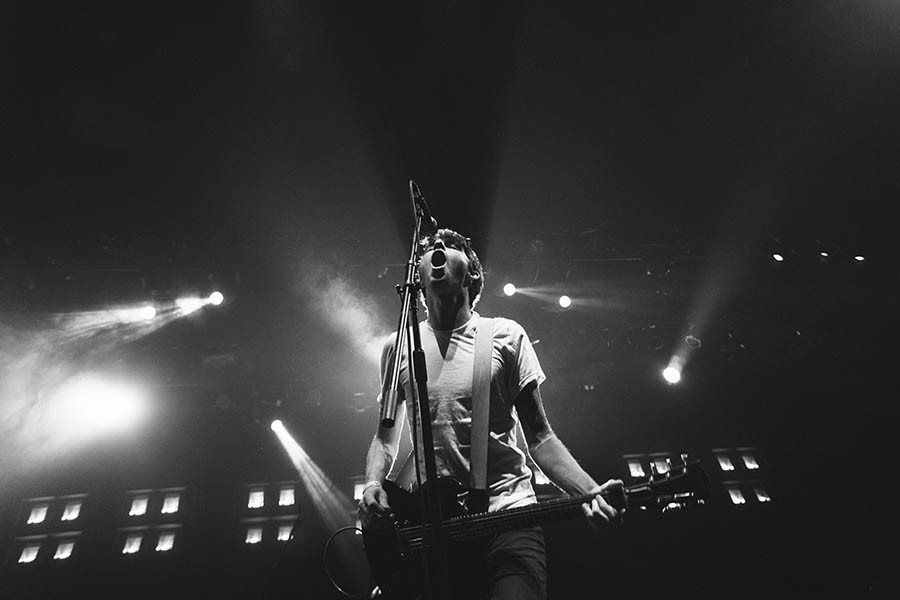 A raw, high-energy performance by punk-rock band Joyce Manor at The Observatory North Park on Feb. 27 had fans thrilled from start to finish.

There was no shortage of crowd surfing, circle pits and killer music — just like a punk show should be.

The California band formed in 2008 and has since released three studio albums, the latest being “Never Hungover Again” in 2014.

Joyce Manor has played at various rock festivals, such as FYF Fest in Los Angeles and Coachella Valley Music and Arts Festival in 2015.

“So we haven’t played in San Diego in a while,” lead singer and guitarist Barry Johnson said after the band opened with some fast, loud tracks.

Its quick, intensified delivery at the show was a hit for the audience.

During the show, both the band and fans were on the same wavelengths, connecting with their shared excitement.

Johnson’s deeper vocals are raw and compelling, wavering away from the whiny, high-pitched vocals commonly associated with punk music.

Joyce Manor played an amplified rendition of its minute-long song “Drainage,” originally a slow song with an almost mystical sound.

Midway through the show, the excitement might have kicked a notch too far after a rowdy fan threw a white Vans shoe on stage.

After Johnson picked up the shoe, people in the audience began to yell, “Damn, Daniel!” or even “Damn, Barry!” in reference to the viral “Damn, Daniel” video that hit more than 45 million views last week on the Internet.

Security promptly proceeded to escort the fan out, but the band in response stopped playing.

“What happened?” Johnson said. “He just lost his shoe so he has to go now? Can he stay? I promise he’ll be good.”

Its quirky, playful attitude and music provided a warm welcome to the fun night.

Sean Bonnette is the lead singer and guitarist of AJJ. He got very enthusiastic on stage. He rolled around on the floor and kicked his legs in the air while singing “Do, Re and Me,” amongst other sporadic behaviors during the show.

For attendee Samantha Ceja, this was her fourth Joyce Manor and AJJ show.

Once again, she was not the least bit disappointed with either of the bands.

“(Joyce Manor’s) shows live are always just so much fun because of the energy in the crowd — the music and the short songs that never fail to keep a crowd,” Ceja said. “AJJ has some songs that you wonder what the hell was Sean thinking when he wrote them but it’s just the beauty of them as an artist.”

Joyce Manor closed the show with its most well-known song in the punk-rock scene, “Constant Headache.” Once the ripping guitar riffs and rolling drumbeats started playing, Johnson no longer needed to sing as he put the microphone toward the crowd.

In turn, everyone out in the audience sang their hearts out.

“It’s just a constant headache, a dead pet device,” Johnson sang. “You hang me up, unfinished with the better part of me no longer mine.”

The lights went out and the song came to its end, but the crowd was not silent. They roared and applauded while pleading for an encore.

The crowd jumped together like a fluid wave for the last songs of the night, amazingly still not out of breath.