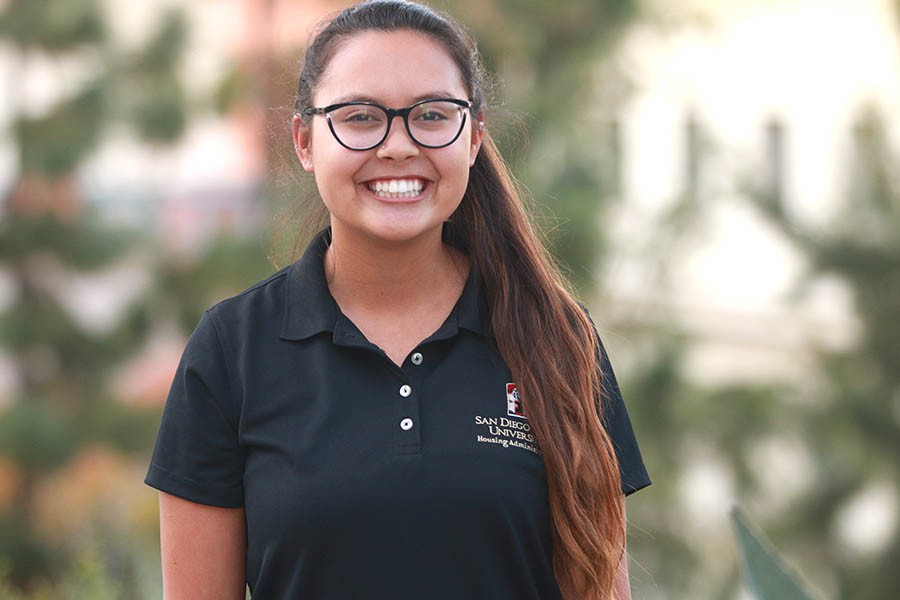 Minoring in environment and society and industrial organization psychology

Why did you decide to run for Executive Vice President?

I am involved in multiple facets of campus and for Executive Vice President you deal more with campus life and really working with students affairs, like you’re the liaison between A.S. and student affairs and that’s something I’m really passionate about. I think that because my perspective is so different and I can see everything happening. You need someone in that role so they understand there is more to SDSU than just Greek life or things like that.

What do you want to change about SDSU?

I think I really want to closen the relationship with residential education and Associated Students. Your first year can be really hard and I think if we programmed more with them, or even through Student Life and Leadership, offering more student organizations to come to the west or east side of campus and have a first-year student organization fair so they can really see it. I also work the front desk of Zura and one of my coworkers is a first-year and he was saying “When did we have a club fair?”

I was so appalled. I was like “How did you miss that? It was this huge thing on Centennial,” and he said, “I don’t know I must not have had class.”

What made you decide to get involved with A.S.?

I was super involved in high school. I got “most involved” in our senior superlatives and I knew, getting to State, I was like, ‘I need to get involved so I feel comfortable,’ and so I interviewed for the FLEX team and fortunately I got it. I actually hated it for a really long time because I just really needed someone to basically hold my hand and walk me through it because this is such a huge campus and luckily Morgan Chan, she was a past A.S. exec, saw a lot of herself in me and she was like, “You’re going to do great things.” She really held my hand and made me sit on different boards with her. She really got me to where I am today and because I didn’t have the best first semester that’s why I wanted to be an RA, because I didn’t want anyone to ever feel like that. That’s why residential education is so important to me because I love working with first-years.

What do you like and dislike about Associated Students?

I really like the family atmosphere that A.S. has created for me especially. I had a really rough time transitioning and I really found my place within A.S. That’s another big reason why I want to run because I want to be able to give back everything that A.S. has given to me. I think A.S. does a really good job of being welcoming and empowering people to be the leader that they can be.

I don’t like the stigma that (A.S.) is exclusive because we’re not at all, but sometimes it’s perceived that way, which is really unfortunate. Everyone that I’ve gotten involved with (in) A.S. as soon as they get involved they’re like, “Wow that was so easy” and how false it is what everyone says.

What accomplishments do you have?

Definitely the dance marathon. That by far has been the most rewarding experience. Last year it was the most stressful 24 days of my life because I had dance marathon, Greenfest, Greek week (and) A.S. elections all within two weeks of each other and I had midterms, but it turned out great. For dance marathon no matter what role you have, big or small, at the end of the event when you see that number that you raised you just realize you helped so many kids’ lives.