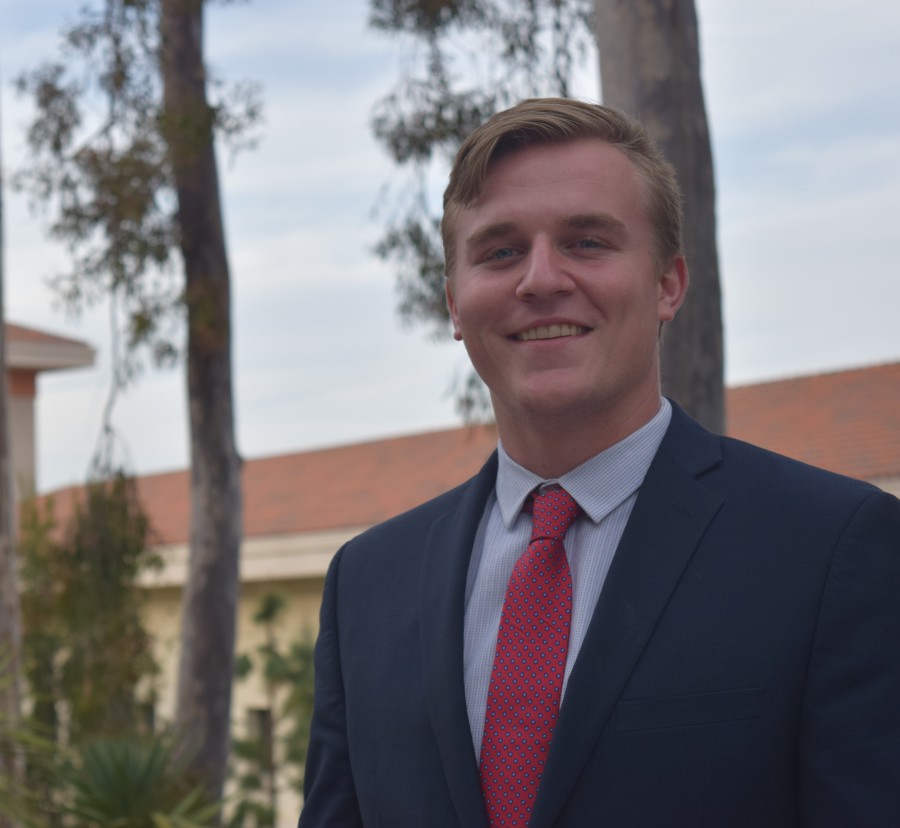 Why did you decide to run for Vice President of External Relations?

I want to run for Vice President of External Relations because I understand the importance of higher education. It’s the greatest investment one can make in oneself, and as Vice President of External Relations, it’s really my duty to kind of ensure that accessibility for all students and ensure that underrepresented communities can attain a degree in a timely manner. As a student who is also depending on financial aid, I understand the importance of an affordable degree, and I want to use my experience interning for the City Council of San Diego, along with my passion for eventually attaining my law degree and becoming a lawyer, to lobby the local, state and national governments for increased funding. I think that my passion for higher education along with my experience makes me the perfect candidate for External Relations, and I want to give back to this school that’s given me a home and really shown me the best about myself.

How did you first get involved with Associated Students?

My first introduction to Associated Students was my freshman year. I went through the first semester not really knowing what A.S. was. I saw them at orientation and convocation, I saw Josh Morse (former A.S. President) speak, I remember that vividly, but I still had kind of a vague idea of what Associated Students was. And then in my spring semester of my freshman year, I remember Josh Morse once again coming to my organization’s meeting to speak about the Student Success Fee and I realized that the Student Success Fee was coming through Associated Students to promote student success, but it was also affecting all of the student body by creating another fee, which like I said earlier, affordability is one of my primary goals. So I realized that if I wanted to ensure that affordability and make sure that my friends and fellow students don’t have to pay unnecessary fees, I realized that I should be on Associated Students. Additionally, I saw the construction of the Aztec Student Union, and heard that was a student-led initiative, and I saw both of those things and realized that Associated Students was a real avenue for creating change on campus. And that’s what I’m passionate about, I want to leave whatever I’m involved in better off than when I came in. My first commission was Sustainability and Green Love, and through that experience I kind of got a feel for Associated Students, and after that experience, I involved myself with the External Relations Board, in charge of informing students of legislation that affects them and policy that affects their college experience, and through my leadership on those boards, I’ve gained a confidence in myself and the student body to represent the students in a more efficient way. I know how to improve it and I know that change is necessary. We’re building on excellence, and that’s what my team wants to stress, that the system’s not broken, but definitely has room for improvement. So that’s my experience with Associated Students, and with my various other leadership roles on campus I’ve acquired a diverse perspective of many different aspects of student life on campus. I want to use these in this position to advocate for student interest, not just those at the table, but the entire student body.

What are some of the things you like and dislike about Associated Students?

Like I said before, something I like about A.S. is that it’s the avenue for creating real change based off the students’ interests. Associated Students is supposed to represent the student body and every student has a chance to vote, so it is the best way to gauge the student interest. And I like the fact that Associated Students representatives and boards and commissions are empowered to actually make change, and we have numerous examples like the student union, the Student Success Fee, the bike lanes, Viejas Arena, all created by student-led initiatives. I really like that, and that’s how I want to live my life, improving the communities I’m involved in.

One thing I dislike about Associated Students is that it does not promote civic engagement as much as I would like. I think the right to vote in a democracy is one of the most historically impactful rights one can have and everyone should use that right and make sure their voice is heard. And until recently, Associated Students really hasn’t promoted that as much as I would like. As a part of External Relations, I created my own subcommittee to plan the first voter-registration drive, called Aztecs Vote, in the spring in advance of the California primaries for this upcoming election year. I’m passionate about civic engagement and I want to make that a part of the A.S. values and priorities. And another thing I would like to improve on within Associated Students, like I said before, (is) ensuring that all students are knowledgeable about what Associated Students is doing for them and getting feedback from students. One of the main problems, I think, that could easily be improved upon within Associated Students is web presence. Our website is hard to use, and I want to take this position, the power of this position, to modernize the website so all students that may not necessarily want to come to a meeting or board or commission will be able to raise their voice and make a complaint. I want to create a website that is inviting to all student voices to give feedback through Your Voice Matters, which is already a link on the website but I feel as if 90 percent of students have no clue what that is. It’s an actual link on the A.S. website, you can provide comments about certain areas of campus, and the comments go to Associated Students University Affairs Board, where they can talk about it in their meetings. But because the website is so unapproachable, most students don’t utilize that resource. And that’s a specific way in which I would like to reach out to the 85 percent of students that don’t feel connected to their Associated Student government.

I think what I want to improve on within SDSU is improving representation of minorities on campus. It’s really important to have those kind of intersectional relations when you go to a university, and I want to do that by promoting accessibility and ensuring affordability for all students. And I think that my experience will let me accomplish that goal. I think that another thing we can improve on is empowering all students to raise their voice. As of last year, less than 15 percent of students voted in the A.S. elections and I think that’s a problem and a sign that Associated Students isn’t reaching out to 85 percent of the Aztec community. I honestly think that Associated Students is supposed to represent the entire student body, and I think that less than 15 percent of students voting in elections demonstrates that they don’t. So that’s why I want to run for this position, why I want to make change and leave a legacy.

What are some accomplishments you’re proud of?

Not so much accomplishments but more what I’m proud of, what I’ve been able to do and be a part of since I’ve come to this campus. My sophomore year, one of my most memorable experiences was being a part of the Join Us sexual violence and awareness task force. It’s an issue that I think is very prevalent at SDSU, and being a male voice in that kind of discussion allowed me to see a lot of different perspectives and talk to many different people concerning the issue and realize that it affects many more people than one would think. And being able to be a part of the solution on campus was one of my proudest accomplishments. Additionally, as the treasurer for the Enviro Business Society, I was able to collaborate with the Green Love Sustainability Commission to approve the insulation of over 12 — I think they’ve put in about eight as of now — water refill stations on campus. I think, given that sustainability is one of A.S.’s values, that my accomplishments within the green community and my priority on keeping this planet as beautiful and as wonderful for my children and the generations after them, is important. And I want to use those accomplishments within the green community in this position by collaborating with the CSU and the local community and the local government to promote sustainability and climate change as one our priorities.

My experience interning for the City Council of San Diego as a policy research intern has given me a wealth of experience in government relations. I’ve worked with local officials, building relationships on the local level, learning how politicians and how government actually works and facilitates change. I know that there is a lot of red tape that they go through and they have to serve even a larger constituent group than we would as A.S. execs, so I know their kind of constraints. But I know how to phrase my initiatives to be in their interests and through working with local government officials, I’ve gained that specialized knowledge. And also, as a policy research intern, I was able to listen to lobbyists from the perspective of an office worker in government, so I was able to get a unique perspective on how elected representatives perceive lobbyists. I was able to see bad lobbying, good lobbying and mediocre lobbying, so I know what it takes to really convince government officials that higher education is important. And under different positions that I’ve had as a fundraiser chair for my organization, I broke our semester record as a freshman, selling over 450 shirts in a single week by myself, and I want to use these skills, my government relations experience, my marketing knowledge and my passion for civic engagement.