Metric impresses with career-spanning set at House of Blues 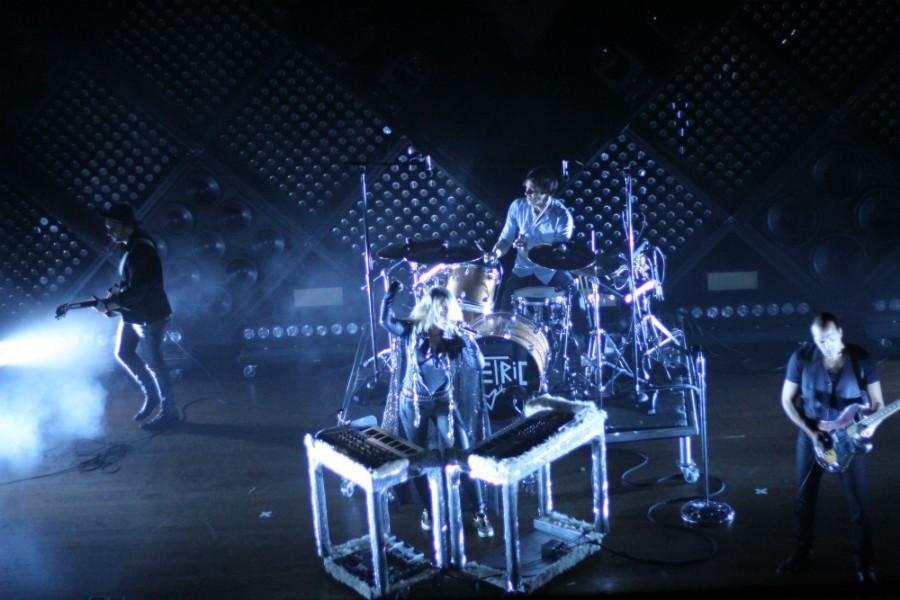 Metric didn’t break its promise to bring “extra” at its sold-out show on Thursday, Feb. 25. The Canadian indie-rock band packed the House of Blues San Diego for the second-night in a row and still had fans wanting more.

The night started with a pulsating performance from the opening band, Joywave. Probably best known for a collaboration it did with Big Data on the massively popular and bass heavy hit, “Dangerous,” Joywave was the perfect band to get fans pumped up for Metric.

Joywave’s lead singer Daniel Armbruster was high-energy and had the crowd enthralled with his precisely executed falsetto. His dorky dance moves were endearing and his excitement was noticeable when the crowd knew all of the lyrics to his band’s song “Destruction.”

Joywave’s electro-pop set made for a seamless transition into the headlining band, but the crowd’s anticipation for Metric’s set was apparent. There was barely any room to move and fans in the front were desperate to keep their spots, even ordering drinks from behind the guardrail.

From the moment lead singer Emily Haines and company stepped on the stage, Metric’s members commanded the stage. It was clear the band’s set was going to be epic after it started with “IOU,” a song off of “Old World Underground, Where Are You Now,” the band’s first official studio album.

As with any band that just put out a new album, die-hard fans are nervous that the band may only play new material. This wasn’t the case for Metric’s show, however, as the band played crowd pleasing hits such as “Help I’m Alive” and “Gold Guns Girls” off of its 2009 album, “Fantasies.”

Metric had the crowd enthralled throughout its 22-song set, and even had fans singing along to songs off its newest album, “Pagan in Vegas.”

One of the best parts of the show was when Haines disappeared for a moment and then reemerged with a huge glow-in-the-dark cape for the band’s performance of the synth-heavy song, “Cascades,” off of its new album. The rest of the band was also decked out in glow-in-the-dark gear and it made for a magical performance.

“It was surreal,” said Chloe Mauri, one of the attendees. “This is one of the best live shows I’ve ever been to.”

The chemistry between Haines and her band mates was undeniable and made for a spectacular show. Their songs were finely executed and showed that Metric’s band members were all masters of their craft.

Something slightly disappointing was that it was difficult to hear what Haines or her band mates said in between songs. VIP guests were invited on stage for a sing-along at one point, but it was hard to know what was going on before asking a fan who was on stage what had happened.

Despite some sound issues, it was still easy to see Haines’ sincerity. She was engaged the entire night, even when she was behind her massive Pro-One synthesizer.

Although it was the band’s second consecutive night in San Diego, the band still brought its all and delivered a powerful performance.