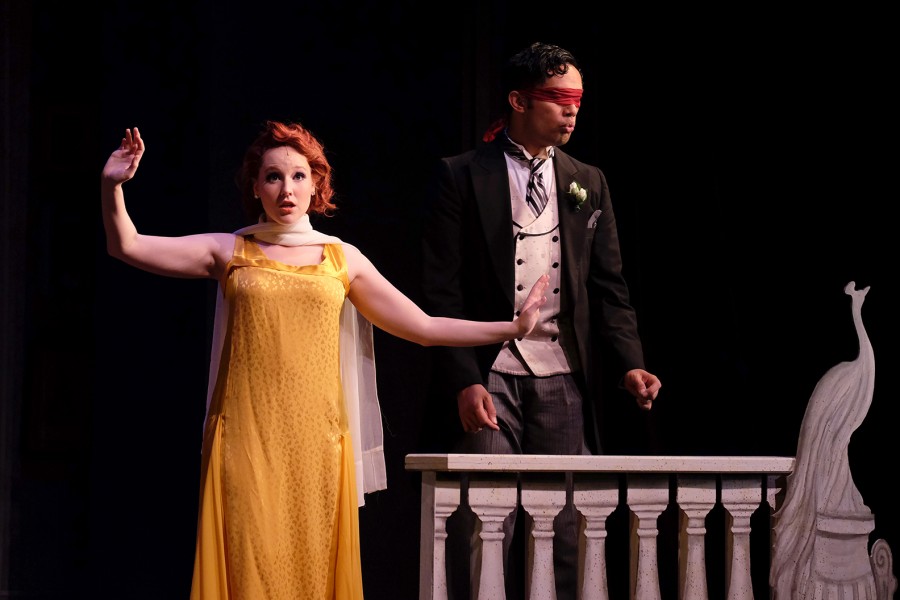 Prepare to escape into a world of outrageous dance numbers, elaborate imagination and utter absurdity in the School of Theatre, Television and Film’s production of “The Drowsy Chaperone.”

“The Drowsy Chaperone” tells the story of a zany musical-theater lover known as Man in Chair. As a way to escape his everyday life, this character plays the record of his favorite musical, a 1928 musical comedy called “The Drowsy Chaperone.” What the audience sees is the Man in Chair’s commentary on the show’s music, actors and story as it literally comes to life in his apartment.

Fresh from New York, new faculty member and show director Stephen Brotebeck joins San Diego State to lend his expertise in the production of this musical.

“Nowadays we get to escape by going home and watching Netflix, but this man gets to escape by listening to his albums,” Brotebeck said.

Through the elaborate set pieces, striking costumes and ridiculously cheesy cast of characters, audiences can test their imaginations and escape into an inventive form of musical theater.

In the opening number, the premise and characters of the show are introduced in an unsurprisingly grandiose fashion. The story centers around a wedding and the series of unfortunate, bizarre and ludicrous events that unfold.

“Over-the-top” is an understatement when describing the cast of quirky characters in “The Drowsy Chaperone.” Characters include a ditzy flapper, a hopelessly romantic airhead groom, a self-proclaimed Latin lover and even a set of gangster brothers with hilariously in-sync gestures.

“The first thing people should expect when they come see (“The Drowsy Chaperone”) is to laugh,” Brotebeck said.

Referred to as a comedy in a musical, the show certainly got audiences giggling. From the numerous pastry puns by gangster bakers to a scene done entirely while being blindfolded on roller skates, “The Drowsy Chaperone” was an unforgettable comedy.

“It was amazing,” theater junior Sarah Tilley said. “The show gave me a buzzing feeling.”

With a story and characters this over-the-top, it’s no shock that the song and dance numbers would be the same. In a charming tap dance duet between the story’s groom and his best man, audiences saw the amount of precision dedicated to the dance numbers.

“I didn’t expect those voices,” theater junior Sophie Gardner said. “It was a production full of talent.”

Perhaps the most striking aspect of “The Drowsy Chaperone” was the aspect of reality. Without the sudden pauses and even record skips provided from Man in Chair, it is easy for the audience to become lost in 1928. Whether it was the subtle ring of the Man in Chair’s phone to interrupt a scene or the elaborately creative power outage in his apartment, there aren’t many opportunities to witness a musical within a musical.

“There’s always a place you can go to where you feel away from it all,” Brotebeck said. “Not only are you seeing the man escape from his everyday life and feel this great sense of joy, but you see yourself through that person too.”

“The Drowsy Chaperone” runs March 4-13. Thursday, Friday and Saturday showings are at 7:30 p.m. and Sunday’s showing is at 2:00 p.m. in the Don Powell Theatre. Tickets are $17 general admission and $15 for students.