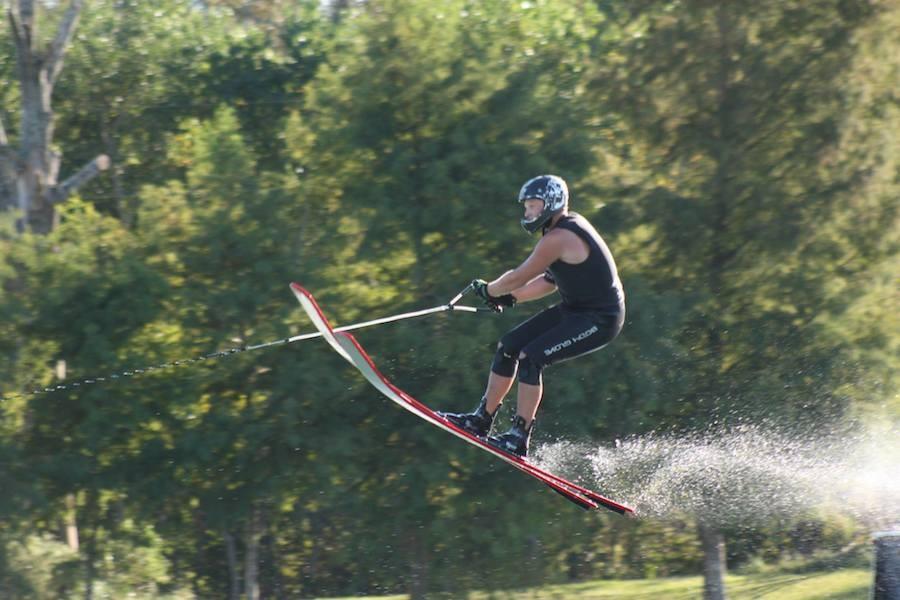 He glances in the rearview mirror at his skier.

“Ready as I’ll ever be,” the first-time skier answers nervously.

“You’re gonna do awesome,” he calls back.

He starts the boat, slowly at first, but then picking up speed. She clings to the handle, eyes wide, looking unsteady. She wobbles, and then straightens up. Cheers erupt from the nearby dock.

“You did it,” Cutcliffe shouts, pumping a fist in the air.

They ski up and down the narrow lake a few times before she drops the rope and decides to come in.

“Hey, that was awesome. You did great,” Cutcliffe says, giving her a high five.

Many first-time skiers are nervous, but it’s the support of their team that gets them out on the water.

Without leaders like Cutcliffe, many wouldn’t even attempt to waterski.

Cutcliffe, an aerospace engineering senior, has been president of the SDSU Waterski and Wakeboard Club for nearly two years. He recently received one of the most prestigious awards available to college water skiers, the Outstanding Male Leader of the Year award, from the National Collegiate Water Ski Association.

Cutcliffe said he didn’t even know he’d been nominated for the award. He received an email informing him of the award and inviting him to the USA Water Ski Banquet in Florida.

“I felt really honored,” Cutcliffe said. “It was a proud moment.”

With his father, he attended the banquet in Haines City, where they mingled with some of the best professional and collegiate water skiers in the world.

Cutcliffe, who spends approximately 13 hours every week running practices in Mission Bay, said he feels well-suited to a leadership role.

“Spring of my freshman year, I was running my own practices, and when you’re running practices, you’re a leader, whether you like it or not,” he said. “So I decided to keep going with it. I always liked holding leadership roles. I still enjoy it.”

This past fall, SDSU was among the top 10 Division I teams in the country at the NCWSA Nationals.

The eighth-place win under Cutcliffe’s leadership was the best performance from the team in the past 20 years.

“They’re almost getting too good too fast,” Cutcliffe joked. “I need to make sure that I still have a spot for tournaments.”

There are three events in a water ski tournament: slalom, jump and trick.

Slalom skiing requires a skier to carve around a series of six buoys, with varying speed and rope length. The faster the speed and shorter the rope, the more points a skier can earn.

Jump skiing requires the skier to get launched off a 5-foot ramp, land and ski away. Speed varies and skiers are scored on how far they go.

Trick skiing requires the skier to perform a series of tricks, each of which have a certain number of points assigned. The more difficult the trick, the more points it’s worth in competition.

Events are separated into men’s and women’s events, and there are five skiers from each team who compete in different heats. Teams are scored based on the total number of points the team members earn altogether.

Cutcliffe skies all three events in every tournament. His favorite is “whichever one I’m currently doing best at.” His current records are five buoys at 36 miles per hour, a 104-foot jump and a 1,500-point trick run.

“I’m proud of how I’ve done as a skier, but I still think I could’ve done better,” he said.

Public health junior Jessica Adams has been on the team since fall 2013.

“I think Newt is doing a fabulous job with the team,” she said. “He creates a great and friendly atmosphere on the team, and that helps lead to success. I think that’s why the team did so well.

“He’s very involved and dedicated, and we all see that. It makes us try harder, too.”

Looking forward, Cutcliffe is excited for Teskila Sunrise, an annual tournament that the team hosts at their home lake in Imperial County. Running a tournament is no easy task, but Cutcliffe said it’s a great opportunity for people to step up and become leaders before the team elects new officers in May.

Another ongoing project that the team is involved with is building a new ramp in Mission Bay, near Fiesta Island where it practices.

“That ramp is older than most of our team members,” Cutcliffe said, “and it’s falling apart. The other day in the boat, we almost ran over a large piece of the ramp that had broken off and floated away, so it’s not just an eyesore, it’s actually a danger.”

Removing a ramp and constructing a new one to replace it is a complicated procedure, but one that is currently in the works. The team has raised approximately two-thirds of the $40,000 required to start constructing a new, more durable ramp that can hold up to the saltwater in Mission Bay.

Cutcliffe, who is working with the San Diego Waterski Club on the project, hopes the ramp will be completed this upcoming summer.

Mission Bay is one of the only public three-event tournament sites in the country, and it’s used by the SDSU Waterski Club, as well as the San Diego and University of  San Diego Waterski teams.

With potentially a new ramp in the works, coupled with the tireless efforts of Cutcliffe, SDSU’s club team is trending up and will look to add on to the growth in the coming years.