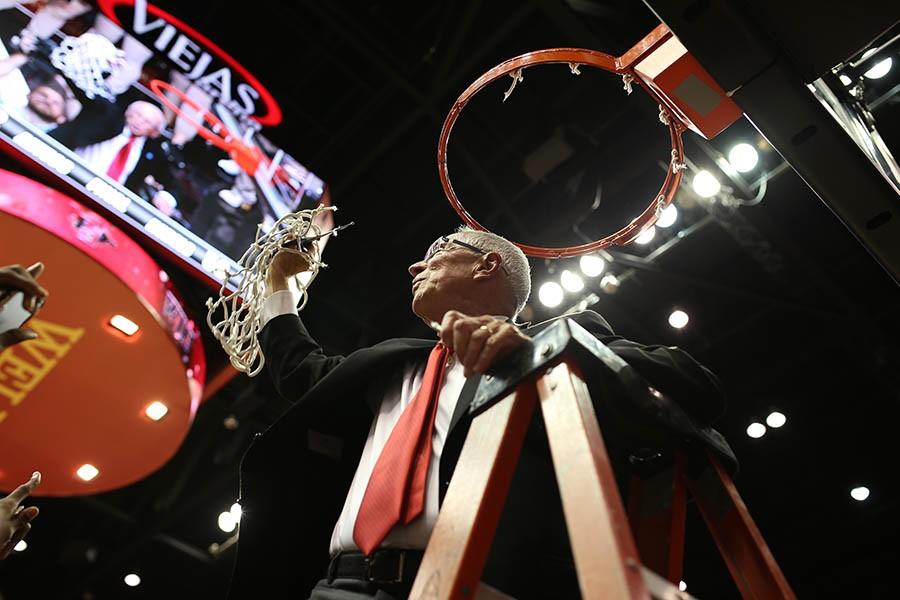 The concept of a single-elimination tournament is simple: Win and advance, or lose and go home.

While this formula hasn’t changed, the result has an enhanced meaning for this year’s San Diego State men’s basketball team (23-8, 16-2 Mountain West) when it takes the court in Las Vegas for the MW Tournament this Thursday.

A porous nonconference resume and a down year for the MW places the Aztecs in a must-win situation if they want to guarantee a seventh-straight trip to the NCAA tournament. However, a loss leaves the fate of SDSU in the hands of the NCAA tournament selection committee and a strong possibility to not hear its name called on Selection Sunday.

Fortunately for the Aztecs, they are traveling to the Thomas and Mack Center playing their best basketball.

They closed out their regular season with back-to-back drubbings of University of New Mexico, 83-56, and UNLV, 92-56.

“Lately the last two games (the shots) have gone in with great regularity and that is why there has been a big difference with the scores,” said SDSU head coach Steve Fisher, who was named MW Coach of the Year by the conference’s coaches and media. “We are cautiously optimistic that our offense will stay the way it has been the last two games.”

As the No. 1 seed in the tournament, SDSU receives a first-round bye and will play either the University of Wyoming or Utah State on Thursday.

The Aztecs were a perfect 4-0 against both teams with an average margin of victory of 10.5 points and held both teams to an average of 59.5 points per contest.

Similarly, SDSU went 3-0 in the regular season against their potential second-round opponents, University of New Mexico and University of Nevada. But aside from the most recent 27-point win over the Lobos on the road, the other two games came down to the final seconds.

In its only contest against the Wolf Pack, SDSU’s victory was in question until Nevada senior guard Marqueze Coleman’s potential game-tying 3-pointer rattled out at the buzzer.

In a reversal of fate, the first match between SDSU and UNM came down to sophomore forward Malik Pope’s 3-pointer to tie the game to force overtime. Freshman guard Jeremy Hemsley would score eight of his career-high 23 points in the extra period, as the Aztecs pulled away with the win.

Hemsley, a MW third-team honoree and voted Freshman of the Year by the coaches, would suffer a right foot injury in the team’s next match against Fresno State on Feb. 10 and has battled it since.

“He felt better Sunday than he had anytime the day following a game since he hurt it initially, so we are encouraged by that,” Fisher said.

“We are going to be cautious with him in practice leading up to Thursday’s game. How many minutes will he play? That I don’t know yet.”

The minutes allocated to the freshman will be critical, especially if the Aztecs make it to the championship game, which would be their third game in as many days, as fatigue and depth will play a large role.

SDSU will need to be at full strength as it looks to win its first MW Tournament crown since 2011 despite reaching the finals in three of the last four years.

“I haven’t won the conference tournament since I have been here, so that is my motivation over everything,” said senior forward Skylar Spencer, who was named the MW Defensive Player of the Year by the conference’s media and coaches.

The Cowboys and Aggies will open the tournament 11 a.m. Wednesday. SDSU will play the winner at 12 p.m. Thursday on CBS Sports Network.

The championship game will air on CBS this Saturday at 3 p.m.