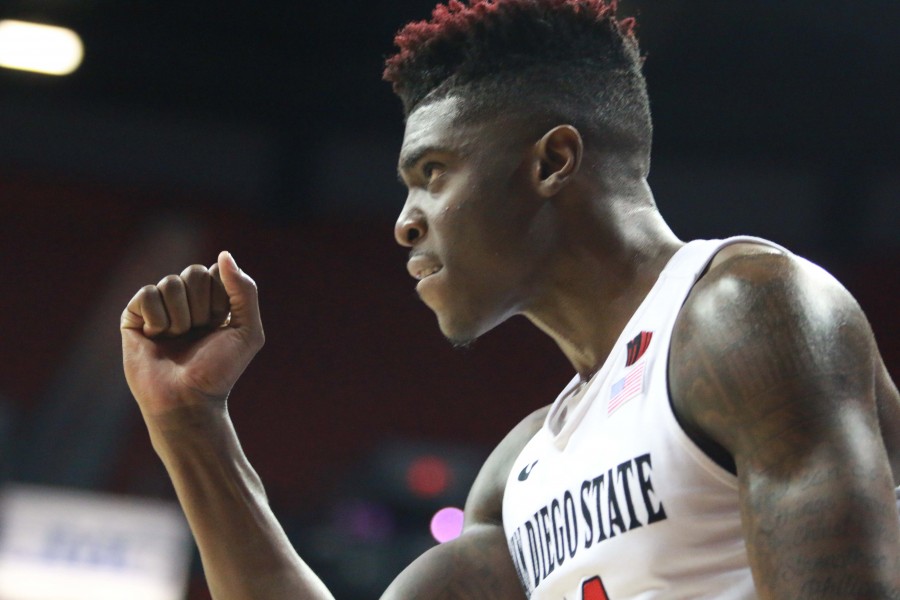 LAS VEGAS — It wasn’t pretty, but it didn’t matter.

The San Diego State men’s basketball team fought, scratched and clawed its way to a 71-65 victory over Utah State in the quarterfinals of the Mountain West Tournament Thursday afternoon at the Thomas and Mack Center in Las Vegas.

The Aztecs trailed nearly the entire first and second half, but came away with the victory thanks to a 6-1 scoring run with less than five minutes in the game, and will now play either University of New Mexico or University of Nevada in the semifinals.

It is the ninth straight season the team has reached the semifinals.

As SDSU walked off the court after the win, the relief on the players’ faces was evident. But that relief was mixed with a concerned look, knowing how close their season came to ending.

“This was what we thought it would be, hard fought, closely contested, two teams that both desperately wanted to win,” head coach Steve Fisher said.

His floater with 48 seconds left gave the team the lead for good in the nail-biting contest.

“I think it was (sophomore forward) Malik (Pope who) came up and set a screen. I saw he gave me an angle to the rim and I took it and (was) happy to finish,” Kell said.

Before that play, though, the Aztecs caught a potential break after a no-call on a possible flagrant foul on redshirt-freshman forward Zylan Cheatham with 1:52  left in the game. They trailed by two at the time.

Cheatham swung his elbow around and struck Aggies redshirt-freshman forward Lew Evans in the lower body. The referees blew the whistle and reviewed the play, but ruled no foul had occurred.

Pope then hit a jumper to tie the game on the very next possession.

“I thought we would have free throws and maybe the ball, or at least free throws,” Utah State head coach Tim Duryea said of Cheatham’s potential foul.

For most of the second half the usually rambunctious Aztec faithful were forced to sit on the edge of their seats, hoping they weren’t about to witness a premature ending to the team’s season.

As fans for the Nevada and New Mexico game strolled in, there seemed to be a lot of crowd support for underdog Utah State.

“That’s human nature,” he said.  “I would, too. If I were sitting there as a neutral, I’d cheer like crazy for Utah State.”

He did note, though, that the Aztec fans “were the crowd” for most of the first half.

The team shot a respectable 40 percent from beyond the arc, but it was the team’s inability to finish around the rim that kept the Aggies in the contest.

SDSU struggled to finish layups it usually sinks. The Aztecs and the rim simply didn’t get along.

The Aggies capitalized on the misses around the rim, out-rebounding the Aztecs, 40-33.

Duryea said after his team’s win over University of Wyoming on Wednesday that rebounding against the Aztecs, who possess the greatest size in the conference, would be key for his team to win.

“You can’t ask for much more than that against that group,” Duryea said.

The first half was nearly a mirror image of the second half, with the Aztecs trailing nearly the entire way up until the final minutes.

Instead of Kell, it was Pope who paced the Aztecs with 10 of his 15 points in the first frame.

Pope’s offensive presence could be a scary reality for team’s facing SDSU throughout the MW Tournament.

“We’ve got another offensive weapon who can make an open shot,” Fisher said. “He’s (also) big enough to go inside and score.”

Senior forward Winston Shepard was also a key cog in keeping the team in it in the first half, scoring nine of his 12 points in that time. He also led the team with eight rebounds.

Outside of the box score, Fisher was elated with Shepard’s performance.

He specifically singled out a play in the second half when it looked like Shepard got fouled by junior forward Jalen Moore, but fought all the way back down the other side of the floor to contest the layup in transition.

“What Winston did today in certain situations is a reflection on his growth as a young man and as a player,” Fisher said.

“I feel like this might have been one of the hardest games we’ve ever been in,” Moore said.

SDSU now awaits the results of the New Mexico and Nevada contest to see who it will play at 6 p.m. Friday night in the semifinals.