SDSU basketball notebook: Kell, defense to the rescue in the second half 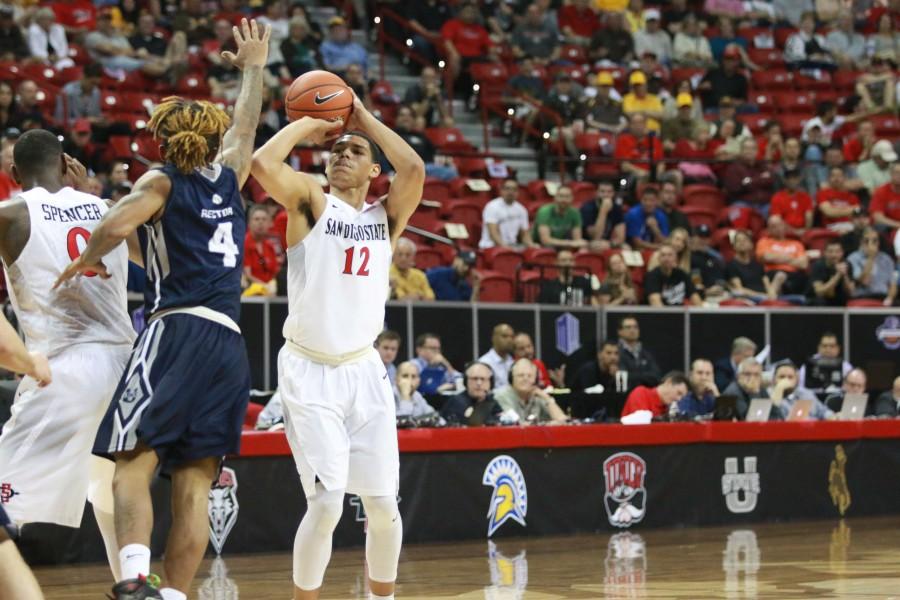 After shooting 1 for 6 from the field in the first half for a total of two points, Kell scored 15 of SDSU’s 35 second half points, including two timely blocks, in the team’s 71-65 win against Utah State in the Mountain West Tournament quarterfinals.

He began the half lighting it up from beyond the arc, scoring three 3-pointers to build the Aztecs’ largest lead of the game at six points.

He wouldn’t fine the bottom of the net until 11 minutes later on a transition layup that would end a four-minute scoring drought from the field for the Aztecs, which allowed the SDSU faithful to take a collective sigh of relief.

The sophomore would then hit a jumper with 48 seconds left to give SDSU the final lead of the game.

Kell would come up clutch again for the Aztecs with five seconds left as he knocked down two free throws to extend the SDSU lead to three.

The Aztecs, to their dismay, have been Dr. Jekyll and Mr. Hyde from the charity stripe this season, and that was in full effect against Utah State.

After Kell hit his final free throws, junior guard Dakari Allen was intentionally fouled and walked to the free-throw line, having gone 3 for 7 prior. He drained both.

Freshman guard Jeremy Hemsley would be the next Aztec to visit the charity stripe after the Aggies’ Shane Rector committed a flagrant-one foul on him. He split the free throws, but SDSU retained possession due to the flagrant foul, and Hemsley would get another chance at the line after junior forward Jalen Moore fouled him.

He converted both and secured the win.

While it wasn’t the case in their nonconference schedule, the Aztecs have improved on performing in critical moments, starting with defense.

Facing a 58-54 deficit with 6:54 left in the game, the Aztecs clamped down on the Utah State offense and snatched the game away from the Aggies.

Utah State, which was having its way in the paint, was 19 for 35 from the field up to that point and had the momentum on its side.

A mixture of a full-court press, excellent weak-side help and solid man-to-man defense was too much for the Aggies, who finished the game 1 for 13 from the floor.

SDSU would use the lapse in the Utah State offense to go on a 17-7 scoring run to close out the game.