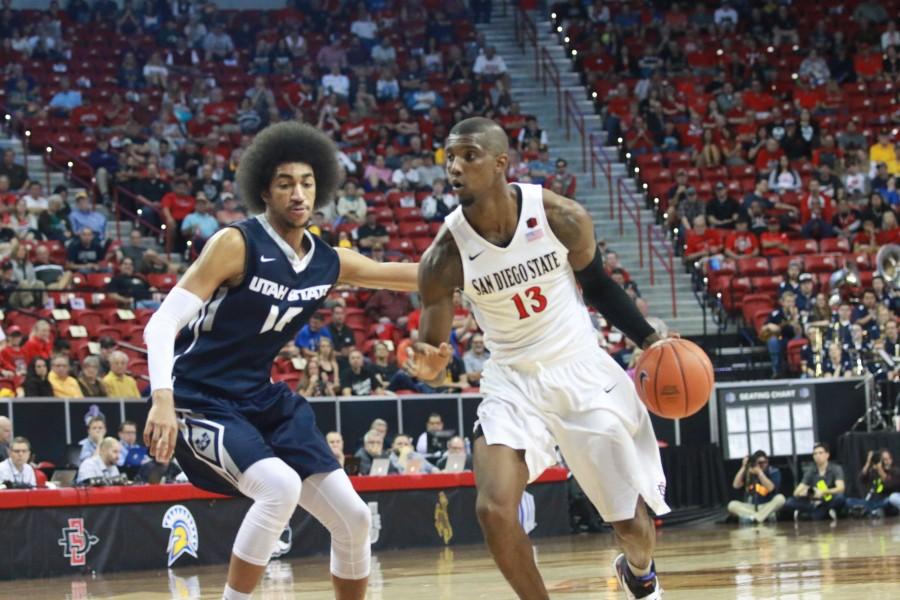 LAS VEGAS — With step one of mission “Three Days, Three Wins” complete, the San Diego State men’s basketball team sets its aim next on University of Nevada in the Mountain West Tournament semifinals.

Similar to the Aztecs’ quarterfinal win against Utah State, the Wolf Pack’s opening victory against University of New Mexico was in question until the game’s waning seconds.

However, as he did all game, freshman forward Cameron Oliver made a momentum-shifting play when his team was in a corner. Nursing a one-point lead, the MW media’s freshman of the year blocked sophomore guard Cullen Neal’s 3-pointer with three seconds remaining. Oliver’s defensive partner, freshman guard Lindsey Drew, came up with the rebound to seal the Wolf Pack win.

Oliver ended his night with 26 points, 15 rebounds and four blocks.

But now Oliver and company have to prepare for the No. 1 seeded Aztecs, which Nevada does not take lightly.

“We’ve won one game and now we’ve got to go face the best team in the league, a team that we respect more than anybody in the league,” Nevada head coach Eric Musselman said.

Perhaps that respect comes from the SDSU model Musselman is trying to emulate with his own squad.

“(We’re) both defensive teams,” Nevada guard Tyron Criswell said. “Honestly, I really feel like tomorrow is going to be a very low-scoring game.”

And if a one-game sample can be trusted, then this will likely play out as these two teams battled it out in Reno to a 57-54 last-second nail-biter in SDSU’s favor on Jan. 26.

But unlike in its previous matchup, Nevada can’t rely on senior point guard Marqueze Coleman to carry the load as he battles a deep bone bruise in his ankle.

The senior only logged 10 minutes in the Wolf Pack’s win against the Lobos, which was primarily a necessity to give his teammates a breather.

Unfortunately for Musselman and Coleman’s ankle, Musselman might have to force his star to play extended minutes to compete with the Aztecs.

“When (the Aztecs) get off the team bus they look like an NBA team with their length and their athleticism and they play hard and they’re well-coached,” Musselman said. “So they’re going to present a lot of problems for us.”

Musselman only used a seven-man rotation against UNM, but against a team like the Aztecs that has depth and elite defensive prowess, he will either have to go deeper down his bench or force Coleman to play extra minutes.

Even with having to face top-seeded SDSU, Musselman was able to poke fun at the challenge the Aztecs pose.

“I’m going to pray,” he said with a laugh. “And we’re all going to take a little bit of Phil Jackson, and just lay down on the floor and meditate and think that a couple of three balls will go in.”

The most obvious will be the battle on the block between Oliver and the back-to-back Defensive Player of the Year in senior forward Skylar Spencer.

It is fair to say Spencer got the better of the matchup the last time these teams met, as he limited Oliver to nine points and seven rebounds. Spencer, who is not an offensive threat, finished that night with five points and 10 rebounds.

“Yeah, first time we played them, actually my very first time playing against a guy like that,” Oliver said of Spencer.

Another key matchup will be between sophomore guard Trey Kell and Criswell, who had 20 points against UNM.

Both players are streaky, but when in a rhythm both can score in bunches, especially in the second half. Expect them to be guarding one another, as well.

The game will tip off Friday, March 11 at 6 p.m. in the Thomas and Mack Center and will broadcast on CBS Sports Network and The Mighty 1090.

The winner will advance to the MW championship game on Saturday, March 12.

Follow along @DAztecSports and @thedailyaztec for live updates and postgame coverage.