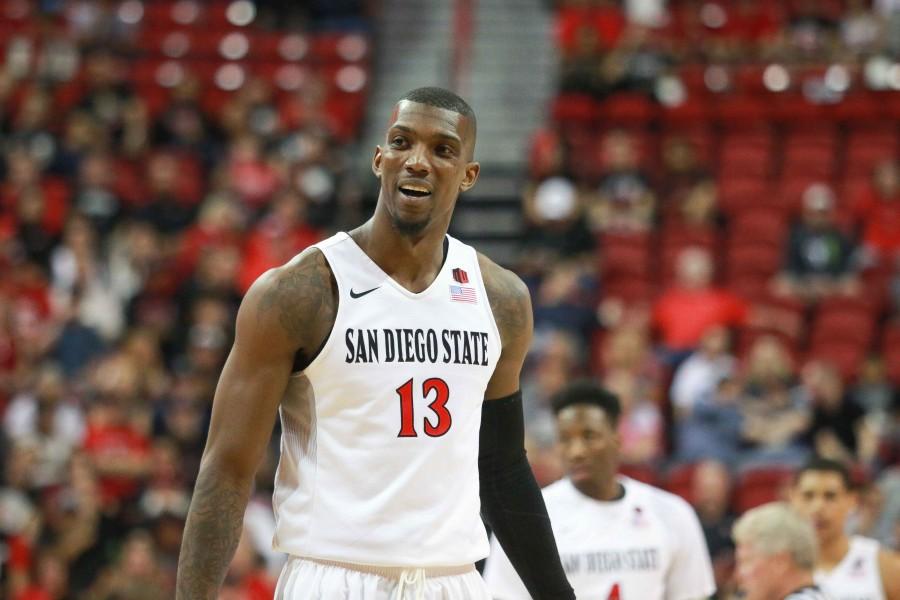 What matters is removing yourself from the mind-narrowing trap of fandom, taking a minute to zoom out and evaluating the body of work put forth by senior forwards Winston Shepard and Skylar Spencer.

These two hold the record for most conference wins in the MW at 56.

Below is fact and commentary on their legacies:

Shepard made his way to SDSU out of Findlay Prep in Nevada. With his arrival, expectations were piled high because he was the highest-rated recruit in the history of Aztec basketball.

The expectations were unfair, no one would have been able to meet them.

Due to the hype, Shepard immediately became the shiny object that the program always wanted. He was symbolic that this program “made it.”

In the past, head coach Steve Fisher built his program and its success on getting transfer students to come play at SDSU, but Shepard was different.

He belonged to SDSU for four years, he was a beacon of hope that the Aztecs would one day haul in loaded recruiting classes one after another.

Instead, Shepard became a punching bag. He wasn’t the immediate NBA talent fans were expecting and he turned the ball over frequently, but what most missed was his ability to pass — having almost two assists per game as a freshman.

As a senior Shepard has 92 assists, a career-high, and has committed his second-lowest amount of turnovers at 66.

He’s grown as a player and he raised this program with him. He has paved the way for the future and for other highly touted recruits like Malik Pope, Jeremy Hemsley and Zylan Cheatham to come to SDSU.

In a recent press conference Shepard was asked about his legacy, and he — true to himself — responded by saying “I think the better question is, do I care?”

Regardless of how you feel about his response or his on-court personality, it’s time to realize that Shepard will always be a part of Aztec basketball history, and that he is responsible for ushering in a new tradition.

If there was ever hope in high school recruiting services, it should have vanished when Spencer was rated as a three-star recruit out of Price High School in Los Angeles.

Spencer didn’t arrive with nearly the fanfare that Shepard had, but he started to generate his own in a hurry.

As a freshman, Spencer played half the minutes of the starting five and still led the team in blocks with 51. Jamaal Franklin was next-closest with 26. His blocks continued to increase. As a sophomore he had 89, and had 91 as a junior.

Spencer’s presence as a defender inside the paint has helped solidify SDSU as one of the premiere defensive teams over the last four years.

His defensive dominance has been rewarded by receiving his second defensive player of the year selection by MW coaches and media.

It was this type of performance each night that helped Spencer amass 106 career victories as an Aztec, which is good enough to break the previous Aztec all-time win record of 105 held by D.J. Gay.

Though he was never a preeminent scoring threat, the nimble big man scored at the right time by raising up and hammering down two-handed dunks.

To put into perspective what he has done, Spencer broke the MW all-time block record and currently sits atop the list with 291 blocks.

Aztec fans may never see another shot-blocker of Spencer’s caliber.