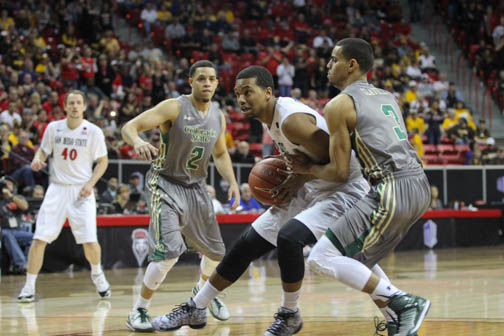 For any Division I college basketball player, making the NCAA tournament is the pinnacle achievement.

Playing on national television, being a part of one of the most watched sporting events in the U.S. and getting to travel all over the country with your teammates.

Doesn’t get much better than that.

“You think about that moment for so long, since you’re a kid,” said Aqeel Quinn, a former San Diego State men’s basketball guard who played in two NCAA tournaments.

After playing two seasons at CSU Northridge and getting regular playing time on the team, he walked on at SDSU with no guarantee of a scholarship.

Quinn practiced with the team that next season, not being able to play because of NCAA transfer rules, and gained the respect of head coach Steve Fisher, who gave him a scholarship.

His gamble continued to play off in his junior season in 2013-14, when the Aztecs, out of nowhere, became one of the top teams in the country, ranking inside the top 10 in the nation at times in the season.

“We were feeling ourselves a bit that year.  Going into pretty much every game, we knew we were going to win,” he said.

SDSU ended that season ranked No. 16 in the country and garnered a No. 4 seed in the NCAA tournament.

“When you’re a high seed, you want to prove to people you belong there and all that jazz,” Quinn said.

The team proved it belonged that year, doing something it had only done one other time: make the Sweet 16.

The Aztecs would battle with regional foe University of Arizona, with the spotlight and all the eyes of college basketball fans in the country, directed squarely on the team.

Not to mention, the game was being played at the Honda Center in Anaheim, a little over an hour north of SDSU.

“In the locker room before the game, we could feel the energy outside with all the people out there because of there was a game before ours,” he said. “Then you go to the tunnel and we’re all looking at each other like, ‘Oh we’re up next!’”

Even though the Aztecs had made four consecutive tournaments at that point, getting to the Sweet 16 still placed that team in rarified air.  It took Quinn all the way up until the tip-off of the game to realize the impact of the game at hand.

“You look around, and you see all these people watching you. Then you look over and you see (former Indiana Pacer) Reggie Miller getting ready to commentate the game and you’re just like, ‘Wow, we’re really here,’” he said.

Although the experience was a once-in-a-lifetime opportunity, it was short-lived, as the Aztecs were defeated by the No. 1 seeded Arizona. The team fought hard against a Wildcat team that came two points away from making the Final Four.

“I remember we were up at the beginning of that game and you could hear the roar of our fans and we had a little homecourt advantage,” he said.

Quinn got the opportunity to play in the tournament once more last season, when the team received a No. 8 seed and beat St. John’s University in its first game, before losing to eventual national champion Duke University in the next round.

Just making the tournament twice and getting to spend time with his teammates, who like with most teams, were his family away from home, is an experience that he will get to cherish for the rest of his life.

He especially mentioned the memories he got to make rooming with former guard Xavier Thames over the two tournaments.

“It’s just like one big family enjoying each other’s company,” he said. “Talking to coach Fisher, all the other coaches, going out to eat and stuff like that. You’re out there making memories that will last a lifetime.

“(Thames) is my best friend from that team and we still talk about those days to this day. The tournament days, the big win against Kansas University (in the 2013-14 regular season). You’re pretty much creating memories with people you’re going to know for the rest of your life.”