Angelo Chol happy with his transfer to SDSU basketball from Arizona 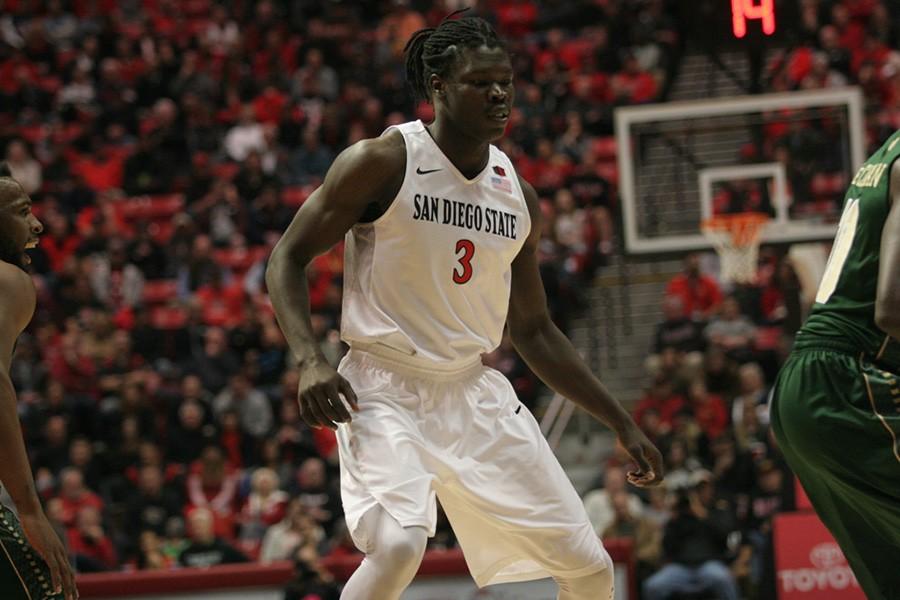 There is no master blueprint or roadmap when it comes to life to guide one back on the intended path if there was a misstep along the way. No fairy godmother to right all the wrongs or make all one’s dreams come true.

However, some things have a way of figuring themselves out.

For San Diego State men’s basketball senior forward Angelo Chol, it took a 400-mile trip east before he realized that San Diego was where he belonged.

After a stellar prep career at Herbert Hoover High School in San Diego, Chol was a prized recruit for the University of Arizona Wildcats and head coach Sean Miller.

But the honeymoon was shortly lived for the 6-foot-9 forward, who saw his minutes diminish in his second year due to a highly-touted incoming freshman class.

The decision was then made to return home, to San Diego — which he lists as his hometown, not Khartoum, Sudan, where he was born — and play for Steve Fisher and the Aztecs.

“Angelo disappointed all of us when he went away, but made everyone stand up and cheer when he came back,” Fisher said.

Of course, the hype built around Chol’s arrival by fans was intense as he was slated to be a part of a block-party frontcourt alongside fellow senior forward Skylar Spencer.

With NCAA rules requiring Chol to sit out a season after transferring, a full extra year of anticipation was built up. But that one-two punch was never able to materialize, as Chol was a regulated bench player in his first SDSU season.

In his first full season, he averaged 13.7 minutes, 4.4 points and 3.1 rebounds per game, far from his playing days at Hoover High where he was the runner-up for California player of the year as a senior.

This year Chol posted a near identical stat line, averaging 13.5 minutes, 3.9 points and 3.2 rebounds per game.

While the lack of minutes or production would have others on their feet in protest, Chol never forgot the opportunity that Fisher and SDSU provided.

“Transferring from Arizona was a great decision, so I’m really happy that I actually transferred here,” Chol said on Senior Night. “Playing for coach Fisher has been an honor.”

That opportunity provided him the ability to return to a familiar environment only 2 miles from where he went to high school and a strong support network of South Sudanese immigrants in San Diego.

But he wouldn’t have made a scene or started to bash his team, regardless. That is simply not who he is.

“Angelo truly epitomizes what a great teammate is all about,” Fisher said following the team’s 92-56 win against UNLV. “He’s good enough to start. He’s not starting. He probably isn’t playing as many minutes as he deserves, but you never hear anything from him other than, ‘How can I help us get better?’ and ‘Thank you.’”

Perhaps it is that quiet demeanor and willingness to do whatever it took to aid the overall team, even at the expense of playtime, which allowed the SDSU staff to overlook Chol during games.

But with the power of hindsight, Fisher realized the mistakes he made in utilizing Chol and his skillset.

“He is a very athletic, talented player,” Fisher said prior to their game against UNLV. “He is our most dangerous low-post player. Sometimes we don’t get him the ball enough, and never does he complain.”

After the game Fisher would go a step further.

“He deserved more minutes,” Fisher said on Senior Night. “I brought the three seniors up front in the locker room … I made that comment about Angelo, ‘You deserve more than you got in terms of on-court time.’”

Chol’s attitude ingratiated him to this team and with the coaching staff, as it has left a mark on this squad.

“Angelo (was a leader) by never ever doing anything but being compliant to what we ask him to do,” Fisher said. “He never would give you a look or ask why he isn’t playing more or why he is coming out, everybody sees that.”

While Chol’s story is still being written, one thing is for sure he is right where he should be: home.