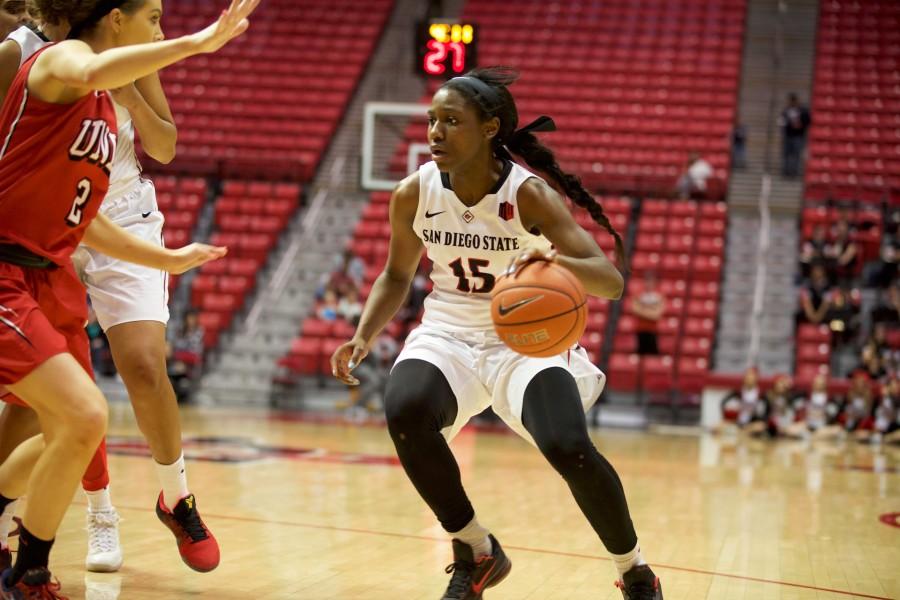 She’s quiet, humble and only outspoken when she needs to be, yet she led the Aztecs on the court this year with 14.4 points a game, was third in rebounding with 4.1 a game, second in assists with 2.4 a game and first in steals at two a game.

Along with the stats she has arguably the most important leadership quality: She lives and breathes the San Diego State program.

“I just want to be able to help the program recruit great players and for people to see how good San Diego State is as a school and as a basketball program,” Fort said. “I want to be able to encourage women to come to this school and I want them to see that a program doesn’t have to be at a high level in order for it to be a great school.”

After her first two seasons at SDSU she is on pace to finish fourth all-time in scoring among Aztecs women’s basketball players with 1,514 points.

“I feel like every year I just want to get better and be able to improve on my game and help any way I can so I haven’t really focused on that,” Fort said. “It sounds great though.”

Fort was second in scoring her freshman year, averaging 10.1 points a game on a team that had an identical record to this year’s team at 12-19.

She said she started playing basketball at age 3 and stuck with it because she liked the competitiveness, energy and team aspect. She said most people in her family play basketball and they would play pickup games when they got together on holidays.

“I was always the only girl playing with a group of guys. Everybody wanted to win so it got rough out there,” Fort said. “I think that’s where the competitive nature comes from for me … you would be falling on the floor and bleeding and they would be like, ‘Get up, I don’t care if you’re a girl.’”

Fort led Etiwanda High School to a record of 39-1 against league opponents during her career and was ranked as the 24th-best point guard recruit coming out of high school. She chose SDSU over schools like USC, Pepperdine University, Wake Forest University, Boise State and Arizona State.

“To be able to change the program and the culture at a school is a big plus,” she said.

“There was a lot of big schools and sometimes big schools come with an issue. I wanted to be somewhere where I knew I would be able to play right away and make an impact right away.”

Fort has made an impact individually with the team, but the Aztecs have struggled to find success the past two years, finishing seventh and eighth, respectively, in conference, and failing to make the NCAA tournament both times. Fort said her goal for the team next season is to win the conference tournament.

She said her personal goals for the off season are to develop counter moves, translate the work she’s done in practice on her 3-point shot to the games and have a stronger mentality on the court.

Fort scores most of her points by driving to the basket and said she has modeled her game after her favorite player, Derek Rose.

“He’s had a lot of injuries, people have doubted him, but he’s always been able to bounce back and prove to be the same player that he’s been,” Fort said. “He’s very humble on the court, you know very quiet (and) I kind of take after that.”