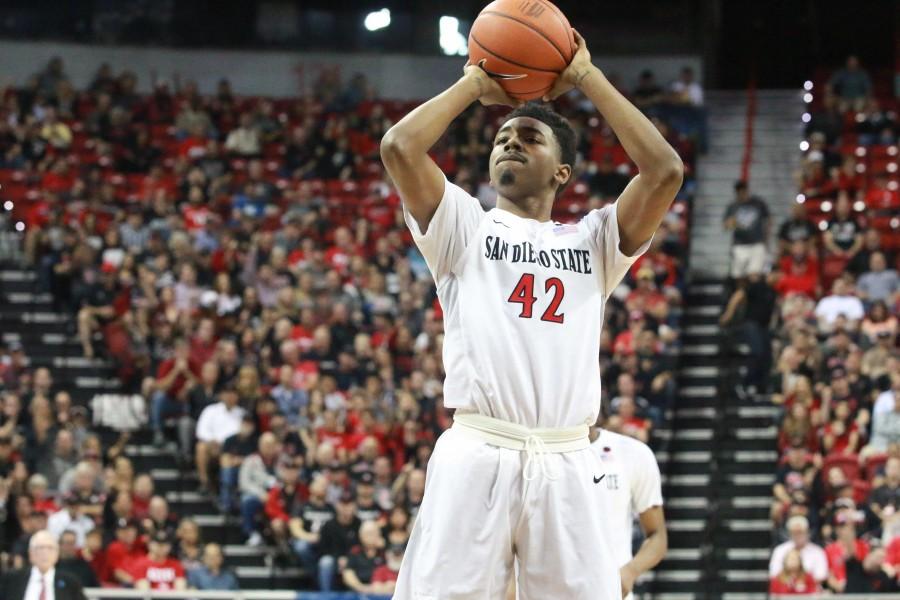 Any seasoned San Diego State men’s basketball fan is aware head coach Steve Fisher does not run an offense-heavy system and there can be a steep learning curve for incoming players, especially for point guards.

Last season the Aztecs believed they found the heir apparent to Xavier Thames between freshmen Trey Kell and Kevin Zabo. Kell struggled as he tried to move from his natural shooting guard position and Zabo eventually lost playing time and  transferred out at the end of the year.

That is what makes freshman guard Jeremy Hemsley’s meteoric rise all more impressive, as he stepped into the starting point guard position and flourished from the opening tip.

In his first career appearance he sent a message to the raucous 12,414 fans of Viejas Arena that they were in good hands. In the game against Illinois State he posted 20 points on 8-of-13 shooting, grabbed six rebounds and dished out five assists.

“I wasn’t concerned that when the lights came on he would be a little bit taken aback by the environment and all of that,” Fisher said after that game. “I didn’t know that I would say that he would shoot and score 20 points, but I do know that he is someone that I love having on our team.”

After a quick dip in production in his first road game as a collegiate athlete against the University of Utah, Hemsley left little doubt what type of player he was to become for SDSU.

He would close out the remaining 11 nonconference games scoring in double-digits in all but one and would average 13.1 points, a team high, on 46-percent shooting.

His play gained him the confidence of the coaching staff and, along with Kell, he was the only player to start every nonconference game, as Fisher rotated men in the frontcourt after losses to the University of Arkansas-Little Rock and Grand Canyon University.

The curve between the college and high school game that affected so many freshmen before him in Fisher’s system, and anywhere else for that matter, never hampered Hemsley.

In fact, he still didn’t reach his freshman peak as he, along with the rest of the team, picked up his play once the Aztecs began the Mountain West season.

In front of a sellout crowd, Hemsley dazzled at home in his first career conference game against University of Wyoming. He dropped 16 points, five rebounds and two assists.

Unfortunately for the rest of the MW this freshman never played like one and posted 10 double-digit scoring games in his next 12 games, averaging 14.1 points.

His true coming-out party in the conference was against University of New Mexico, when he scored eight points in the overtime period to seal the win and ended with a career-high 23 points.

“You better enjoy (him) while he is here, is all I have to say,” senior forward Winston Shepard said after the game about his freshman point guard.

It would take a bone bruise in the next game against Fresno State on Feb. 10 to slow down Hemsley and his sensational freshman campaign.

While posting double-digit outings in his four games after sitting out a game against Air Force Academy, he wouldn’t start another game for SDSU and his minutes were diminished.

In the MW Tournament, Hemsley only averaged five points per game and 18 minutes, which was 10 minutes less than his season average.

However, his play was recognized by both the MW media and coaches for end-of-the-year awards. He earned third team All-MW honors from the media and first team All-MW and freshman of the year accolades from the coaches.

Despite the slow, but eventual decline at the end of the season, it is Hemsley’s play prior to the injury that should have the Aztec faithful excited for years to come, especially, in a system that he already proved he can thrive in.