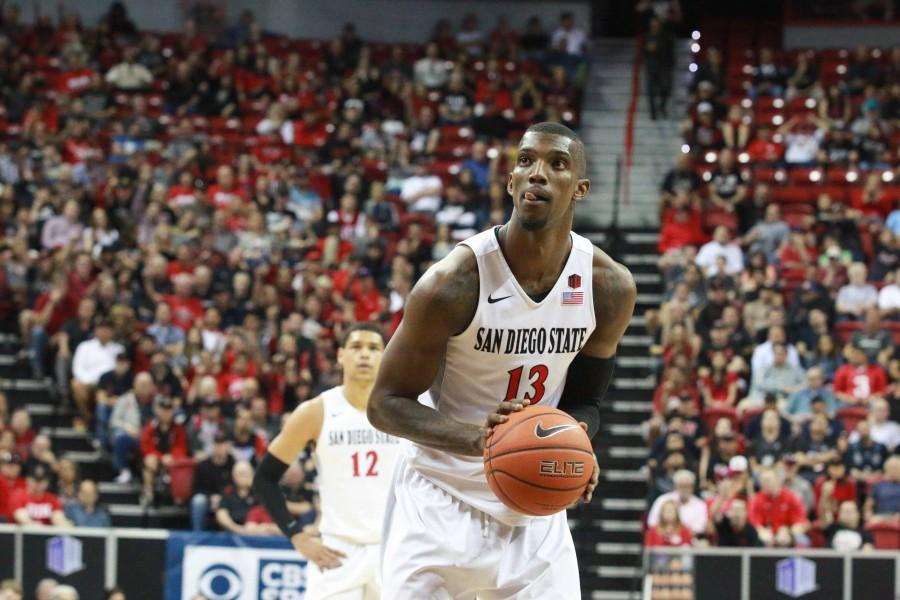 There is a reason mastodons went extinct.

They were large lumbering animals and couldn’t outrun their greatest nemesis: humans.

While that occurred roughly 10,000 years ago, the 8,324 fans in Viejas Arena received a full reenactment on Tuesday night.

Senior guard Winston Shepard would pace the Aztecs all night and found himself atop the mountain as he recorded the first triple-double in SDSU history. He ended the night with 10 points, 10 rebounds and a career-high 12 assists.

The coaching staff allowed Shepard to go for the record as he was the only starter in the game in the waning minutes with the outcome not in question.

“I left Winston in because I knew he was close to a triple-double and that’s not my style to try to do things for personal recognition, but I think he deserved the opportunity,” head coach Steve Fisher said.

As the possibility of him recording the triple-double became a reality “The Show” would scream out the remaining stats he needed.

Once he recorded his 10th rebound, the crowd would erupt in a Shepard chant and give him a standing ovation as time expired.

“It was nice to have everybody cheering for me,” Shepard said.

Outside of Shepard’s triple-double, the match itself was and old-fashioned beat down.

“They smoked us like a salmon,” IPFW head coach Jon Coffman said. “I can’t believe there is 68 teams better than that.”

There was a balance early in the match as the Mastodon’s senior guard Max Landis drew first blood with a 3-pointer. However, just like in their three matches in the Mountain West Tournament, sophomore forward Malik Pope opened the Aztec scoring with a 3 of his own.

After some early jockeying between the teams, the Aztecs smelled blood in the air and began to feast on the clearly outmatched Mastodons from Indiana.

Redshirt-junior Matt Shrigley, who did not play against Fresno State in the Mountain West Tournament championship game, began a 9-0 run with a 3-pointer and sophomore guard Trey Kell capped it off with an emphatic dunk.

IPFW could do little to make up ground before another SDSU wave came crashing down.

The Mastodons ended the first half with 22 points while shooting 27.6 percent from the field. Coming into the game, they averaged 80.2 points per game.

Shepard would end the half on a triple-double watch as he tallied four points, four rebounds and eight assists (already a career high).

“When you get a big lead, like we got tonight, I think that helps you relax a little bit and helps you play more freely and confidently,” Fisher said. “You feel good when you see that separation.”

That separation only grew in the second half, as SDSU got into a comfort zone and pulled further away and continued to rack up highlight dunks and blocks in the process.

However, the Mastodon’s redshirt guard John Konchar did everything in his power to keep his team in it. He pulled down over half of his team’s rebounds with 18, six offensive, and threw in 10 points and four assists while at it.

IPFW’s leading scorer Max Landis would be held in check throughout the game and shot 5 for 15 from the field for 14 points and a game-high six turnovers.

“Max Landis has been literally unstoppable for us this year … and they made him inefficient,” Coffman said.

Pope would end the night with 15 points, eight rebounds and zero turnovers.

The win places senior forward Skylar Spencer on his own mountain as he became the winningest player in MW history with 107 wins. He already passed D.J. Gay for the most wins in program history earlier this year.

The Aztecs will host University of Washington on Monday at 8:30 p.m.