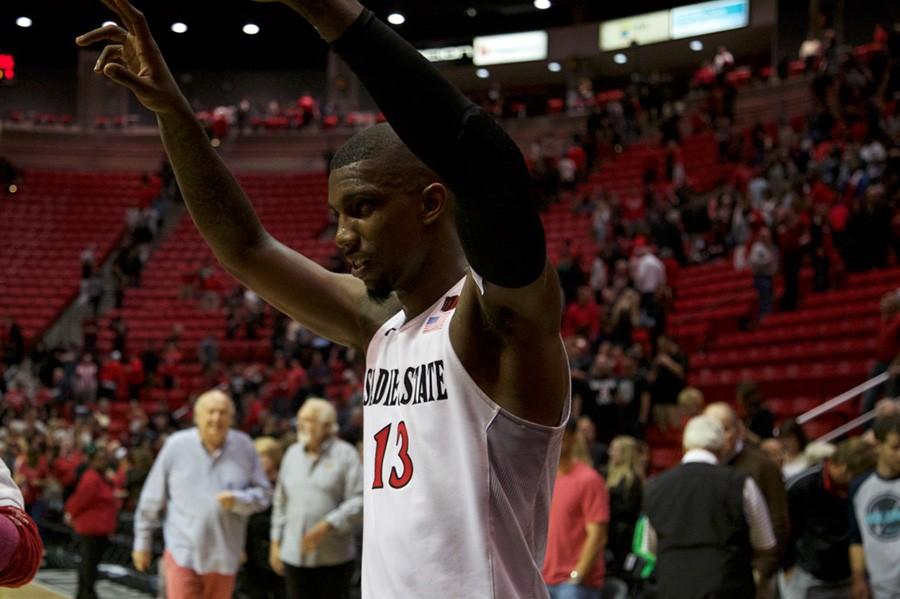 There’s no question about it, the NIT is like the little cousin to the NCAA tournament when it comes to TV viewership, media attention and water-cooler talk around the country.

A rocking, sold-out Viejas Arena aided the second-seeded Aztecs as they defeated University of Washington 93-78 Monday night at Viejas Arena in the second round of the NIT.

Due to No. 4 seed Georgia Tech’s  domination of No. 1 seed University of South Carolina, 83-66, the Aztecs will get one last home contest this season 6 p.m. Wednesday against the Yellow Jackets in the NIT quarterfinals.

On the floor, the Aztecs were tasked with slowing down the No. 6 scoring offense in the country, coming off a 107-point game.

The message pre-game was try to slow down their tempo, but eventually, the Aztecs had to just play at high-speed.

“It’s fun to play that way,” Fisher said. “But they make you play that way, and we did a nice job of not giving them a lot of easy stuff.”

The pace was no issue for senior forward Winston Shepard, who led the team with 20 points and also grabbed 10 rebounds.

“At the end of the day, San Diego State isn’t a school that should be walking it up the court,” Shepard said.

The fast-pace offense led the team to its highest point total of the season.

The point total also set the school’s Division I record for most points scored in a postseason contest, topping the 83 scored against Indiana University in 2006.

“Who wouldn’t want to come see a team score (93) points?”  Shepard asked. “There are some special guys on this team, I’ve said that since last offseason.”

While the Aztecs were scoring at a high rate, Washington was picking up fouls at nearly the same pace.

Freshman forward Marquese Chriss, who scored 19 points, fouled out with 1:13 left to play, but had four fouls nearly the entire second half.

Three other Huskies ended the game with four fouls.

Not to mention, the Huskies were already playing without their fourth-leading scorer, freshman Noah Dickerson, who was suspended for violating team rules prior to the game and did not make the trip.

“They switch on every screen. And we thought we could get big-on-little and take advantage of it with penetration and be able to make plays, and we did that,” Fisher said.

SDSU dominated the first half, racking up a 16-point lead going into the locker room, and turning that into an 18-point lead quickly once play resumed.

“I though in the first half their length may have bothered us inside,” Washington head coach Lorenzo Romar said. “They played like a veteran group.”

Washington’s prolific offense wouldn’t go down without a fight and went on 12-2 run, starting with 12:05 left in the game, and cut the lead all the way to five with 7:43 left.

Prompted by a two-handed slam from redshirt-freshman forward Zylan Cheatham to stop the skid, the Aztecs then went on to secure the victory.

Now the team is one win away from making the semifinals of the tournament for the second time in program history, and making a trip to Madison Square Garden in New York.

Tickets for the general public go on sale at 5 p.m. Tuesday, and thanks once again to an anonymous donor, students can receive two complementary tickets to the game.

Students can pick up their tickets at 9 a.m. Tuesday at the Viejas Arena box office.

Wednesday’s game against Georgia Tech is slated to tip off at 6 p.m. and can be seen on ESPN2 or heard on The Mighty 1090 AM.