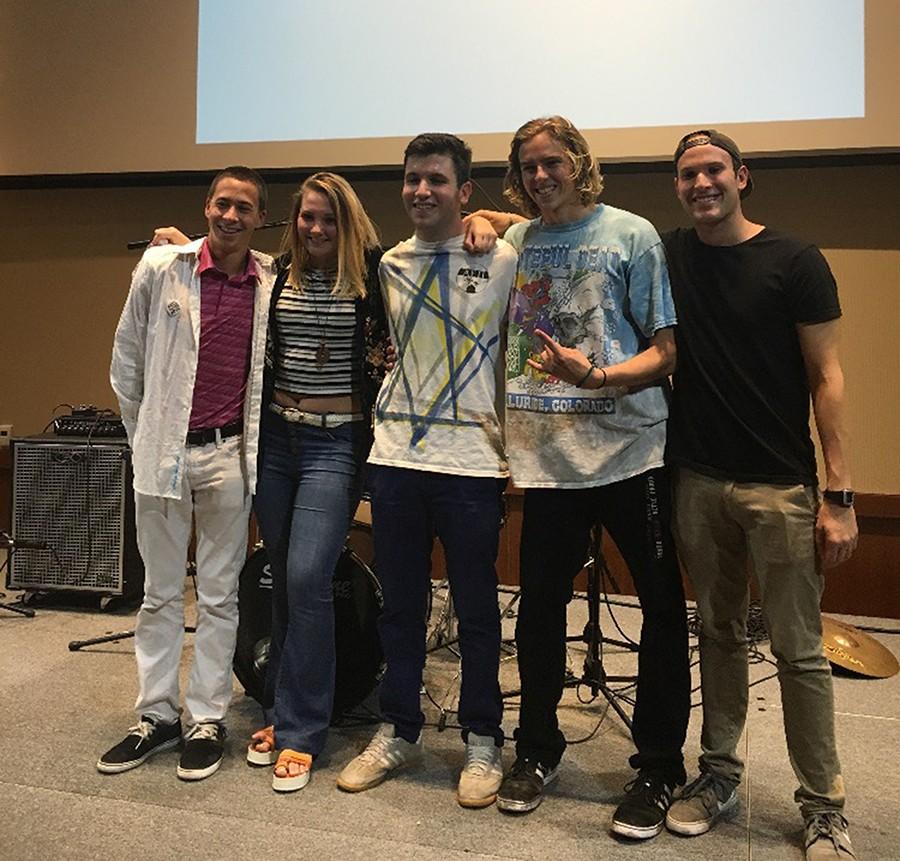 The Open Mic Champs impressed at Battle of the Bands despite its last-minute assembly.

Student band The Open Mic Champs formed in order to compete in Aztec Rock: Battle of the Bands, but its victory proved their true potential as a group.

Public administration senior Paige Koehler, a guitarist and singer for the band, described The Open Mic Champs’ formation as last-minute.

Koehler asked international business senior Kelby Kupersmid in January if he was interested in teaming up for Battle of the Bands.

The two had performed in Open Mic Nights at San Diego State together along with recreation and tourism management senior and drummer Spence Noble — hence the band name.

“After the first time we played, the five of us together, there was actually a good energy, which doesn’t always happen when you jam with people,” Higdon said.

Despite the group’s recent formation, The Open Mic Champs was victorious at Battle of the Bands on Tuesday, March 9. The members successfully brought eclectic genres together to form an upbeat groove.

The group labels its music as alternative, hip-hop, soul and funk — genres drawn from each members’ individual musical upbringings.

“It’s probably a testament to the musicians we are, considering that we do come from so many different backgrounds,” Dring said. “But I would say we are more than capable of making (the band) work beyond what we expected.”

The fusion of the members’ different styles is what makes band strongest because, at its core, The Open Mic Champs is a collaborative effort.

“If you listen hard enough you can definitely see how each one (of us) is contributing and how it brings (the music) to what it really is,” Dring said. “It’s beautiful.”

The Open Mic Champs’ victory awarded the group an opening spot at the GreenFest concert on April 21 at the Cal Coast Credit Union Open Air Theater. Kupersmid said he wanted to win Battle of the Bands for some time now.

“Since freshman year, when I saw Macklemore (perform at GreenFest), I’ve wanted to be on that stage,” he said.

This semester was the first time any of the members had performed at Battle of the Bands, and they had a great deal of fan support at the event. At one point, Kupersmid asked if there were any audience members who attended just to see The Open Mic Champs, and he was answered with a roar of cheers.

“This was our last semester to finally (perform at Battle of the Bands), and to have all of our friends show up, all of the people who we love to play for and who love to hear us play, was just the coolest feeling ever,” Koehler said

“(The performance) was incredible,” said Ari Lerner, film junior and avid supporter of the group.

“They just got the crowd moving. (Their music) is such a good time.”

While the group currently prepares for its GreenFest performance, which will be the biggest show any of the members have ever played, the members also hope to put out more original music in the future.

“I’m really looking forward to writing a song between the five of us,” Kupersmid said. “That will be the real test.”