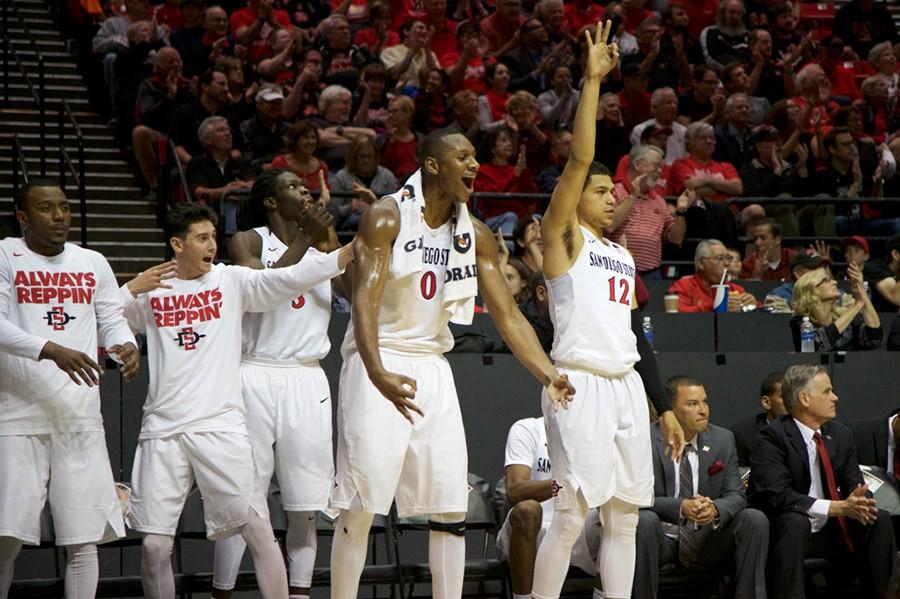 Not making the NCAA tournament was a tough pill to swallow for the San Diego State men’s basketball team after making it the past six seasons.

There was one silver lining, though: making it to at least the NIT semifinals and getting a chance to play at Madison Square Garden.

The Aztecs accomplished that mission Wednesday night, taking down Georgia Tech, 72-56, in front of another rocking, sold-out Viejas Arena crowd.

From the minute SDSU found out it didn’t get into the tournament Gregory mentioned (the Big Dance), senior forward Winston Shepard took it upon himself to make sure the team would come out with fire in the NIT.

He set the bar high, recording the first triple-double in school history in the opening game, and has been an emotional anchor for the team throughout the three wins.

“First, and most importantly, it was about being excited to play in this tournament,” Shepard said. “We saw a team last year (Colorado State) that had a letdown after not getting into the (NCAA) tournament and came out and laid an egg in the first game.”

Now, it’s off to the Big Apple for the No. 2 seed Aztecs, who will take on No. 4 seed George Washington University next Tuesday.

It will be the school’s second trip to the NIT semifinals, the last time coming in 2009 when the Aztecs were defeated by Baylor University in the semis.

“By the time we get to New York it’ll be eight teams left in the country … if you’re still playing at this point, your team is pretty special,” Shepard said.

SDSU’s pace of play against Georgia Tech compared to Monday against University of Washington was night and day.

“It was obviously much slower,” Shepard said. “We still scored a good amount of points, but it was a different game today.”

The pace nurtured one of the more methodical players on the team, sophomore guard Trey Kell.

He led the team with 18 points and was 4-for-5 from beyond the arc.

“At first they went under a couple screens … so I had the space and as a shooter, you shoot it,” Kell said.

On Monday, the SDSU offense scored a season-high 93 points to lead the team to the win.

Six Aztecs scored in double figures against Washington and the two teams combined for 135 field-goal attempts, compared to 112 Wednesday.

Shepard (12 points) and sophomore forward Malik Pope (10 points) were the only other players to score in double digits against the Yellow Jackets.

Pope also grabbed 10 rebounds for his third double-double in the last four games.

“That’s the beauty of our team. We’re able to be versatile and still find ways to win,” Shepard said.

The team got back to its roots of playing suffocating defense.

Smith, who’s the team’s second-leading scorer and entered the game first in the ACC with 3.11 3-pointers per game, went 0-for-4 from beyond the arc and was held to six points.

The Yellow Jackets used their muscle inside to help erase an 18-8 Aztec lead in the first half and knot the score at 31-31 going into the intermission.

Senior forward Charles Mitchell was a force inside for Georgia Tech, notching a 10-point, 12-rebound double-double before fouling out in the last minute.

SDSU now gets a six-day break before it heads out to play George Washington at 6 p.m. Tuesday at Madison Square Garden on ESPN.

The team is expected to fly out Sunday, and Fisher said there will be a little time for the team to explore the city.

“We’re excited to see the hustle and bustle of Madison Square Garden,” he said with an ear-to-ear smile.

SDSU now has back-to-back wins against Power Five schools. The last time the team did that was when it beat UCLA and USC in 2012-13.
Georgia Tech entered Wednesday’s contest No. 24 in the country in offensive rebounds per game. SDSU out-rebounded the Yellow Jackets 12-7 on the offensive glass and outscored them 17-5 on second-chance points. “We made that a point of emphasis,” Fisher said.
The Achilles heel for the Aztecs at times this season has been turnovers in critical moments. SDSU turned the ball over just six times against Georgia Tech, three in each half. “We did a good job of making decisions in traffic,” Fisher said.