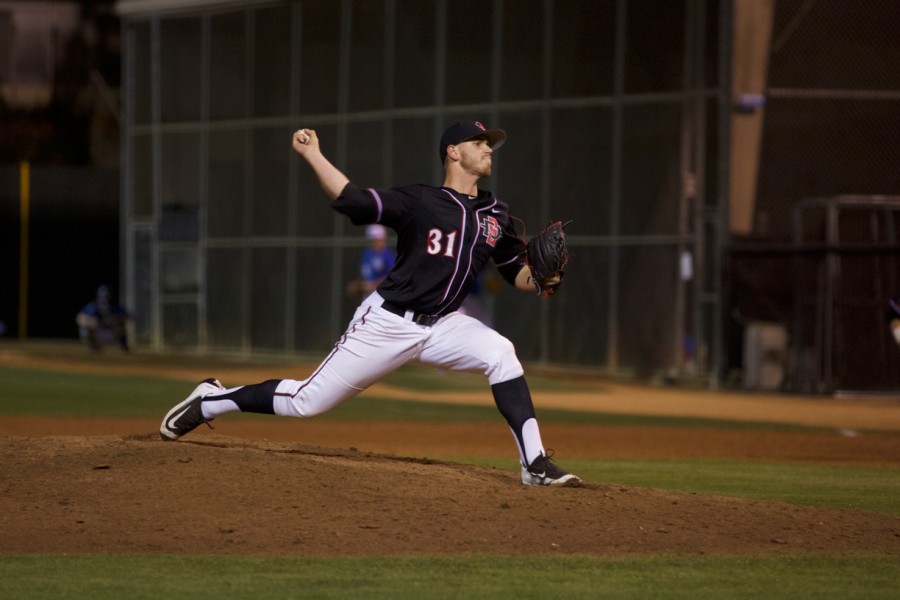 In its third straight loss by three runs or fewer, San Diego State Baseball lost the second of a three game set to University of New Mexico on Friday night.

After seeing a wave of offense in the past few weeks, notching ten or more runs three times in five games, SDSU has scored three of fewer runs in each of its last three contests.

“When you’re struggling a little bit, guys try to do too much,” head coach Mark Martinez said of his team’s hitting issues. “They just need to relax and be themselves and not try to carry the team.”

The Aztecs (4-16, 1-5) saw a good start from redshirt-freshman Harrison Pyatt (0-2) go to waste, as they gave up all four runs in the final three innings.

Pyatt went 6.2 innings, allowing six hits and two runs in his fifth career start, as he lowered his era to 3.18.

While they are not giving up many runs, the runs scored against the pitching staff have been crucial.

Pitching coach Sam Peraza talked about his pitcher’s struggles, and boiled it down to being overly cautious.

“Every pitch matters right now,” Peraza said. “We gotta understand that it’s okay for us to make some mistakes. And right now we’re just pitching so careful sometimes that we get behind in counts and that’s when mistakes happen.”

This stradegy worked to start the game, as the contest stayed scoreless until the sixth inning, when the Aztecs took their first lead of the series.

Sophomore catcher Hunter Strattonn opened the frame with a single, and sophomore center fielder David Hensley moved Stratton to third base with a single of his own.

Sophomore shortstop Alan Trejo punched in Stratton with an rbi groundout, his thirteenth rbi of the season.

New Mexico struck back in the top of the seventh.

After Pyatt allowed runners on second and third with one out, he was taken out for sophomore Jacob Erickson.

After a strikeout from Erickson, senior shortstop shot a double in the right field corner, sending home two runners and giving the Lobos a 2-1 lead which they would not vacate.

New Mexico scored again in the eighth and the ninth inning, extending its lead to 4-1 coming into the bottom of the ninth.

Freshman designated hitter Dean Nevarez was not ready to concede, as he led off the frame with a solo homer to left center field, his second home run of 2016.

But the Aztecs could not add any more runs, as they lost their second straight to New Mexico, and fifth straight overall.

SDSU has scored only five runs this series, and seven in the last three games, but Dean Nevarez is optimistic about his

Breet Seeburger will be on the mound for the final game of the series on Saturday afternoon, as SDSU will try to avoid falling to 1-6 in Mountain West conference play.