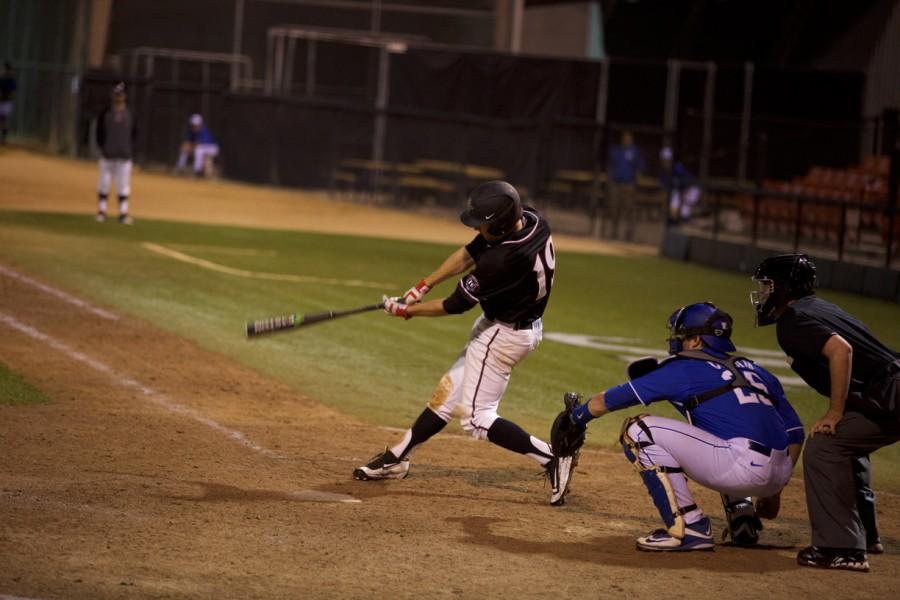 Aided by the bright San Diego sky, San Diego State Baseball ended its five-game skid with an 11-6 win over University of New Mexico on Saturday afternoon.

After dropping the first two games of the series, the Aztecs (5-16, 2-5 MW) stole a game from their Mountain West opponents in the series finale.

SDSU scored three runs in the sixth and seventh inning, punctuated by a bases-clearing double from sophomore right fielder Tyler Adkison in the seventh.

“Tyler’s at-bat was hopefully a turning point for us in the season,” Martinez said. “You could kind of feel everyone breathe a little easier after that.”

Every batter in the Aztecs’ lineup recorded either a hit or a run, including freshman designated hitter Dean Nevarez, who scored two runs despite not hitting safely in the contest.

Part of their success was the mistakes made by the New Mexico defense, which can be attributed to the aforementioned sun.

“What was huge today was we had a few things go our way,” Adkison said. “All season, any situation that could go either way has gone with the other team. Today we had a few sun balls and some calls by the umpires, and we fed off of that.”

“It give you a lot of confidence when you’re playing, and once you get that confidence going its hard to be stopped.”

The first miscue was in the second inning,when redshirt-senior Spencer Thornton reached base after a dropped popup by the right fielder.

Thornton would steal third base and score on the next at-bat, which tied up the game 1-1.

Junior second baseman Andrew Brown gave the Aztecs a 2-1 lead with a solo home run later in the inning, his first of 2016.

New Mexico retook the lead after a two-run fifth inning, 4-3, but that would end up being the last lead it would have in the series.

Sophomore shortstop Alan Trejo opened the inning with a double, and with two outs he scored on a wild pitch.

Tyler Adkison extended the inning with a double, and a dropped fly ball by freshman left fielder Tyler Mang allowed Adkison across home.

Andrew Brown continued his big day with an rbi single, scoring freshman first baseman Jordan Verdon and giving SDSU a 6-5 lead it would not relinquish.

“The whole energy of the team changed after that inning,” Brown said after the game.

The Adkison double pushed the lead to 9-5 in the seventh, and two more eighth inning runs sealed the Aztecs’ first win in two weeks.

Mark Martinez reflected on the impact of this win and what his team will have to face going forward,

Life will not be getting any easier for the Aztecs, who will be on the road for a two-game set against Oregon State University, who is currently ranked as the No. 3 team in the nation by d1baseball.com.