What the CFA strike could mean for students 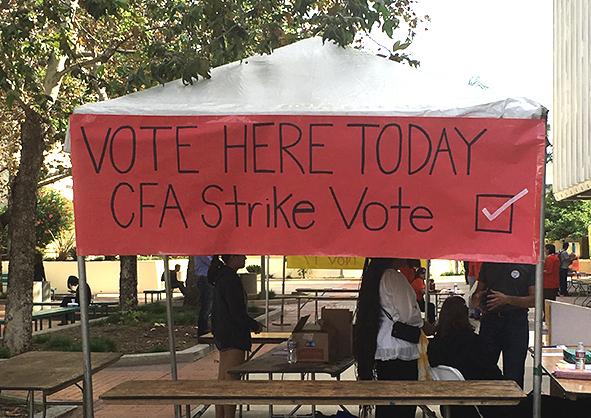 With a faculty strike still scheduled for Wednesday, April 13 through Tuesday, April 19, California State University officials have said there is a possibility that many faculty members will not participate in the strike.

“We anticipate that many classes will continue to meet as not all faculty will strike,” CSU spokeswoman Toni Molle said.

However, Pam Fox, a San Diego State department of religious studies lecturer, said of the 80 percent of faculty who participated in an up-or-down vote on the strike, 94 percent of those approved.

These numbers indicate many faculty will likely be participating in the strike.

Although some students have expressed concern that the strike may impact their progress toward graduation, Fox said the strike will have zero effect on that.

“All students will receive a grade in their class. Period,” she said. “That’s the contract faculty signed for each three-unit course, or for the semester.”

Progress toward graduation was similarly unaffected when faculty took furlough days during the recession.

Doreen Mattingly, a professor in the women’s studies department and a member of the Campus Strike Coordinating Committee, agreed.

“I think that the needs of students are built into what we’re trying to do, to have a strategy that won’t impede students’ progress toward graduation from the very structure of it,” she said.

“That’s the idea. It varies class by class what instructors want to do.”

Fox did say she will have to skip a small amount of material over time in her classes.

“I give out the syllabus on day one then take it week-by-week,” she said. “Hopefully all faculty will be creative and integrate lessons into the strike. Same objective, but different format. Faculty always act at their discretion regarding what is best for students. We’re experts in
our field.”

Instructors have little hope for a deal being reached before the strike.

While Mattingly said the union does not “have any formal information we’re going to let go” about exactly who will be participating in the strike, she did say “I think we’re going to have a very strong strike, but we’ll see on the 13th.”

The strike is being organized by the California Faculty Association, the union representing CSU teaching faculty.

The strike is part of the CFA’s “Fight for Five” campaign; the union has asked for a 5 percent increase in faculty pay following years of stagnant wages due to the recession.

Faculty took a pay cut during the recession in the form of furlough days, which are days on which no classes are held and thus, no faculty are paid for their time. Faculty have received modest pay increases since the recession, but pay has actually fallen at SDSU when adjusted for inflation.

The results of the fact-finding report released on March 28 validate the strike and give faculty the legal right to hold a strike. Fact-finding is the final step in the collective bargaining process.

Along with a recommendation to increase faculty pay by 5 percent, the report also recommended providing Service Step Increases to eligible faculty, continuing to study the faculty salary issue and developing a joint strategy to seek state funding. The report suggests that in order to implement these recommendations, funds should be reallocated from other projects and put toward resolving these issues.