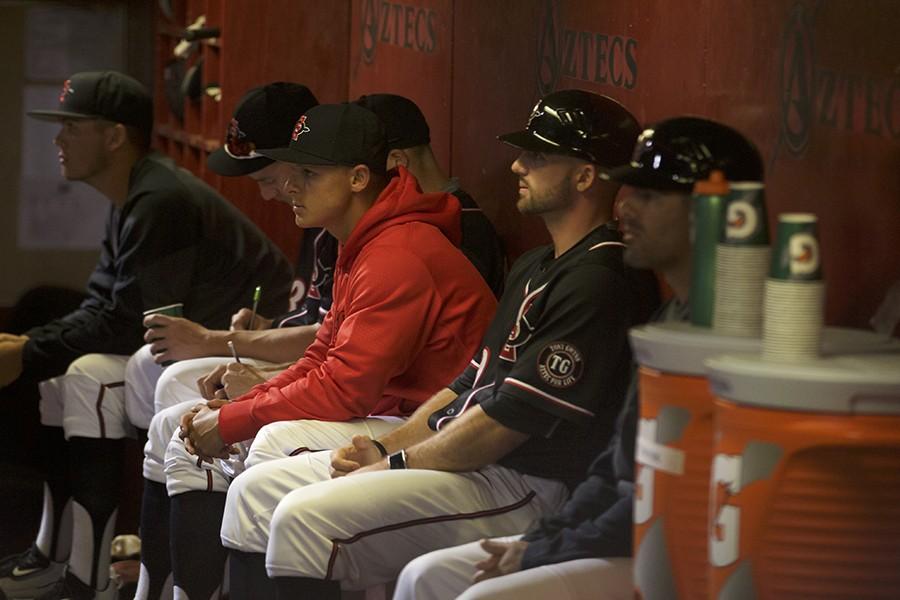 San Diego State baseball did not have the happy, cheerful kind of spring break road trip many of its peers were having, suffering through two one-run losses to the University of Nevada after splitting a two-game set with No. 7 Oregon State.

The Aztecs (6-19, 2-7 Mountain West) continue to experience gradual improvement, even in a stretch of losses.

“They are still an inexperienced group,” head coach Mark Martinez said, “but they’re growing with each opportunity they get. It’s really neat to watch.”

The three losses during the week came in three consecutive contests, marking the fourth time this year the Aztecs have lost three or more games in a row.

In 2015, the Aztecs had only one such streak in the regular season — a streak that included a series sweep at the hands of Nevada.

SDSU opened its spring break with a big 6-5 win on the road over Oregon State, propelled by a ninth-inning home run from sophomore shortstop Alan Trejo.

The first loss of the break would come the next day, when the Beavers topped the Aztecs, 9-6, to split the two-game set.

SDSU opened the series against Nevada last Friday with a 6-5 loss in 10 innings.

The team would not fare much better in game two.

In that game, the Aztecs took an early lead, scoring two runs in the the top of the second inning.

With two outs, sophomore right fielder Tyler Adkison — who has been the two-out hero of late — singled and scored on a double from freshman first baseman Jordan Verdon, his second of the series.

In the bottom frame, the Wolf Pack responded with two runs, tying the game, 2-2.

They would take the lead in the bottom of the third, scoring what would ultimately be the winning run on a one-out single from sophomore designated hitter Cole Krzmarzick, who leads the Wolf Pack with a batting average of .408 this season.

Outside of the second inning, the Aztecs’ offense recorded no runs and only two hits, and failed to support junior left-hander Brett Seeburger (0-1), who gave them 5 1/3 innings of three-run ball.

Game three against Nevada, the second game in the series that extended into extra innings, was suspended in the middle of the 10th so that SDSU could make its flight back home to enjoy the rest of its spring break.

The score was tied, 6-6, after two ninth-inning runs by the Wolf Pack, and the game will conclude when Nevada visits Tony Gwynn Stadium on April 29.

Game one against Nevada followed a similar storyline as the unfinished finale.

Facing a 5-3 deficit in the top of the ninth inning, Verdon led off with a double, and was replaced by sophomore pinch-runner Denz’l Chapman.

Sophomore third baseman Justin Wylie reached base with a two-out single, and later scored on an RBI single by shortstop Alan Trejo, tying the contest 5-5.

Including that game, the Aztecs scored nine runs in the last two innings of their previous four games, outscoring opponents 9-3 in the final frames.

SDSU has yet to complete a three-game series on the road, and have played only seven true road games in 2016, compared to 17 games at Tony Gwynn Stadium.

Of those seven away games, three have been in conference play, where the Aztecs are winless with an 0-3 record.

That does not include the two suspended games (the other one coming on March 20 at Air Force Academy) that SDSU will complete later this season.

Even in the losses, the Aztecs are seeing growth.

Earlier in the season, their losses were largely blowouts.

During the Tony Gwynn Classic in early February, SDSU was outscored 23-5 in its three games, all at home.

The fact that the Aztecs are competing in games is a “step in the right direction,” head coach Mark Martinez said, but it does not mean that they are ready for the stretch run of the season.

“We have a long ways to go to get where we want to be,” Martinez said, “which is playing in the postseason and playing beyond the conference tournament.”