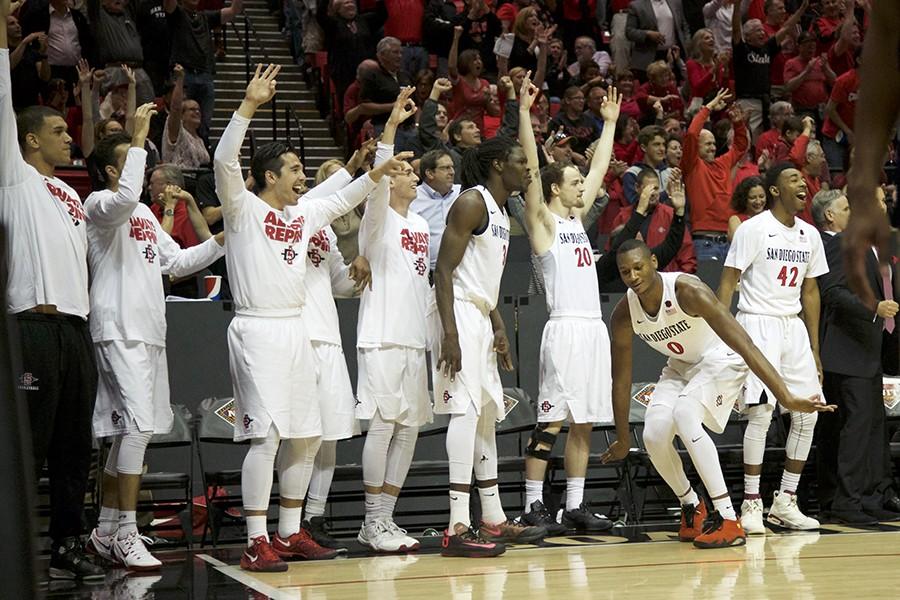 All clichés aside, the 2015-16 season was truly a rollercoaster affair for the San Diego State men’s basketball team.

The season started out with enough hype or “sauce” to excite the already rambunctious and loyal Aztec fan base.

Sophomore forward Malik Pope was gearing up for his first full season with SDSU alongside his partner in crime, redshirt-freshman forward Zylan Cheatham, while two of the school’s most iconic players, Winston Shepard and Skylar Spencer, were preparing for their last.

Not to mention, the JAM Center had officially opened and the team was in the mix for some of the top recruits in the nation.

The twists and turns that SDSU would go through in the coming months, though, were enough to rival any Magic Mountain coaster.

The season’s end also had an up-and-down feel, with the team reaching the NIT semifinals for just the second time in school history, but at the expense of not making the NCAA tournament for the first time in seven years.

Here are some of the key moments from this season:

A CBS report claims the Aztecs are under NCAA investigation because of a rules violation stemming from giving impermissible benefits to prospects. The rules violation would have theoretically been a “Level 1” violation, a very serious offense. At this time, the Aztecs were finalists for two of the top recruits in the country, T.J. Leaf and Michael Cage Jr.

Michael Cage Jr. commits to University of Oregon. SDSU was a finalist to land the four-star recruit.

Leaf, who plays at Foothills Christian in El Cajon, commits to UCLA over Oregon and SDSU.

Aztecs get a win in their home and season opener, 71-60, over Illinois State. Freshman guard Jeremy Hemsley scores 20 points with six rebounds and five assists in his debut. His combined 31 points, rebounds and assists were the most in an Aztec freshman debut in the Steve Fisher era, passing Kawhi Leonard (19).

In one of the team’s ugliest offensive performances in Viejas Arena history, the Aztecs were defeated by Arkansas Little Rock, 49-43. The loss moved the team to 2-2 after losing to then-No. 16 University of Utah on Nov. 16. Little Rock ended up having a pretty decent season (30-5), though, that included a win over No. 5-seed Purdue University in the NCAA tournament.

SDSU gets, looking back on it, its best win of the season, beating then-No. 14 UC Berkeley on a neutral floor at the Continental Tires Las Vegas Invitational. It would serve as the team’s only win over a top-25 opponent all year. The big win would be overshadowed, however, the next day when the team suffered its worst margin of defeat all year to then-No. 22 West Virginia University, 72-50.

Ten days after the team got its best win of the year, it suffers what may go down as one of the worst losses in Fisher’s tenure, losing to University of San Diego at Petco Park, 53-48. USD had an RPI of over 300 coming into the game and the defeat was considered to be one of several reasons the Aztecs weren’t granted an at-large bid into the NCAA tournament.

Then-No. 2 Kansas University comes into Viejas Arena and thumps the Aztecs, 70-57, even though SDSU cut the deficit to two points midway through the second half. It was the Aztecs’ last nonconference game of the season, and the team finished that portion of the schedule 7-6. The loss snapped SDSU’s 23-game winning streak when coming off a loss (the team lost to Grand Canyon University the game before).

SDSU announces that the NCAA had “concluded its inquiry” of possible rules violations by SDSU and closed the matter, saying there was “no proof of allegations.”

Pope hits what may go down in SDSU history as “The Shot” as his 3-pointer as time expired forced overtime against University of New Mexico.  The Aztecs would go on to win the game, 78-71, and extend their winning streak to open up Mountain West play to 11, a school record.

The Aztecs’ 11-game winning streak is snapped by Fresno State, 58-57, in Fresno. Dating back to last season SDSU was one win shy of breaking the 2010 New Mexico team’s record of 14 consecutive MW wins.

Aztecs clinch the outright MW regular-season title in a 73-61 win at University of Wyoming.  The team clinched the title with three games to play (a MW record). It was the 10th title (tournament and regular-season) in Fisher’s tenure.

SDSU closes out a game against Boise State with seven missed free throws en route to blowing a nine-point lead to lose the game, 66-63.

Shepard and Spencer become the winningest players in MW history in a 83-56 win at New Mexico.

Aztecs record largest margin of victory over UNLV in school history with 92-56 win.

NCAA tournament selection committee does not select SDSU as one of 36 at-large teams. The Aztecs receive a No. 2 seed in the NIT, matched up against Indiana Purdue University at Fort Wayne.

In what are usually sparsely attended games, Viejas Arena is sold out as the Aztecs score their highest point total of the season, and Division I postseason history, in 93-78 win over University of Washington.

In front of another sold-out Viejas Arena crowd, SDSU defeats Georgia Tech, 72-56, to advance to the NIT semifinals in New York for the second time in school history.

George Washington University defeats SDSU, 65-46, in the Aztecs’ second-ever trip to the NIT semifinals, officially ending the season. The offense struggles in the loss as junior guard Dakari Allen led the team with 13 points.