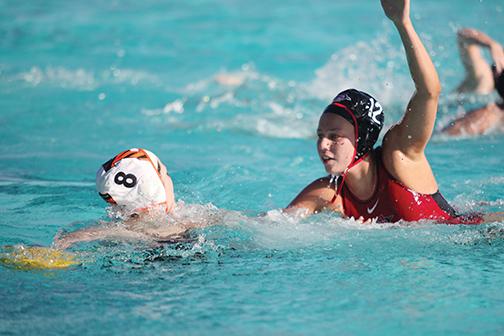 The Aztecs hopped around the Bay Area, playing in Santa Clara on Friday, Stockton on Saturday and Palo Alto on Sunday.

Their overall record improved to 13-14, yet with the wins over SCU and Pacific, the Aztecs remain undefeated in conference play at 5-0.

“I was very pleased with our performance,” head coach Carin Crawford said. “This weekend was a critical point in the season and I felt we played some of our best polo. The road stretch proved to be our biggest challenge so far as we played three highly skilled teams.”

The win over Pacific marks the Aztecs’ first over a top-15 opponent on the season. The Tigers, like SDSU, were unbeaten in conference play until the game on Saturday.

“We knew it was going to be a difficult match,” Crawford said. “Luckily, our strong start against Santa Clara carried into that day.”

Senior goalkeeper Rachel Mitchell recorded 15 saves in the victory. Overall, she had more than 30 for the weekend.

“Rachel was outstanding,” Crawford said. “She has a good defense in front of her, but she was stellar. She was a game changer for us.”

Junior utility Caroline Israels led the offense by netting eight goals, including four against the Tigers. She leads the team with 49 goals on the year.

“(Israels has) been one of our leaders all season long,” Crawford said. “She gives the offense a tremendous boost. It’s really not a surprise she’s doing this well.

“(After this road trip,) I feel like we’re coming together as a team and finishing stronger. Going 2-1 this weekend set us up for a successful finish to the year. We just need to fine tune our communication and execution down the stretch. And we have the talent to do so.”

SDSU will have a three-game home stand over the weekend facing California Baptist on Friday, Loyola Marymount University on Saturday and Arizona State on Sunday.