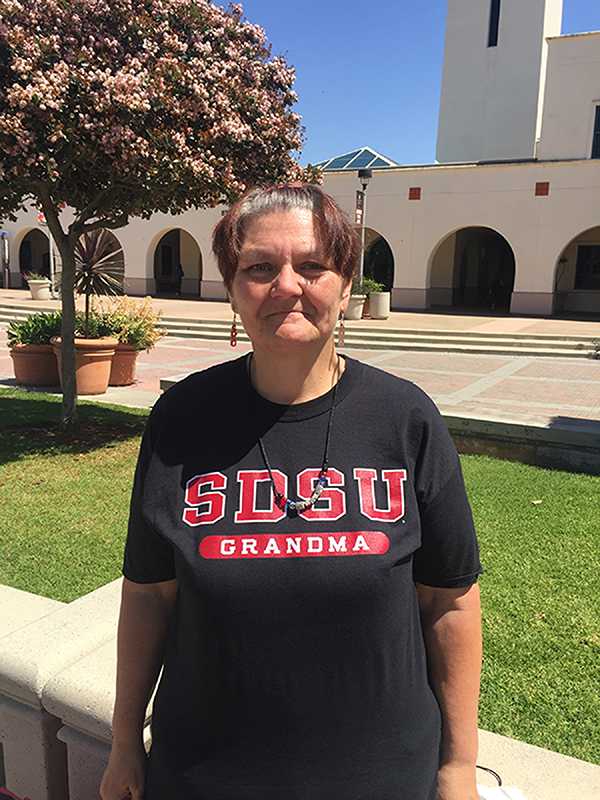 Fifty-seven-year-old psychology junior Virginia Hoffman’s life experiences have led her to San Diego State, where she is now using her past to fuel her future.

Hoffman describes her youth in Texas as turbulent. Her parents divorced when she was 3 and she was subsequently put into foster care. She lived in three different foster homes and, at age 6, was physically abused by her foster parents.

Following her experiences in foster care, Hoffman was moved to a Christian children’s home where she experienced verbal abuse.

“Often in my life, I was told that nobody wanted me and nobody loved me,” she said. “I took that to heart and I believed all that.”

Hoffman wanted to go to college after completing high school, but she was discouraged after being told by counselors she was not smart enough. She eventually turned to drugs, alcohol and overeating to numb the pain from the abuse she endured.

“In my mind, I was thinking I was getting back at the people who hurt me, but all I was doing was hurting myself,” she said. “I turned to bad people who I thought I belonged with, but I didn’t. I still felt lost and alone and unloved.”

Hoffman’s habits led to medical, social and mental issues. During this time, she experienced sexual abuse and was immersed in a constantly unstable environment.

She cites her daughter and son as her motivation to better herself.

“My kids are the ones who kept me going,” she said. “I was trying to give them everything I didn’t have as a child — love and support.”

Hoffman’s involvement in church and The Salvation Army led to her period of recovery. She lost 150 pounds and has now been sober for 18 years.

The first pastor Hoffman met through The Salvation Army was Vicky Esqueda, who has watched Hoffman transform her life throughout the years.

“(Hoffman) has progressed beyond what anyone would have expected,” Esqueda said. “Her drive, motivation and perseverance through many bumps in the road have only made her stronger and more determined to graduate and help others.”

Hoffman did not value education in her youth, but when she eventually became a caregiver, the woman she took care of encouraged her to go back to school.

“(She told me) I was very smart and I would be a good counselor,” Hoffman said.

She initially took correspondence courses through Oral Roberts University in Oklahoma before coming to San Diego and earning three associate’s degrees at Grossmont College. She then transferred to SDSU and currently holds junior status.

“Instead of staying at home feeling sorry myself, I (wanted to go) back to school,” she said.

She has also become vice president of Aztecs for Recovery, an organization for SDSU students to come meet with someone who will listen and help them overcome struggles with personal issues.

The age gap between Hoffman and her fellow classmates has not had a significant impact on her college experience because her children have helped her to be more in touch with younger generations.

“Nine times out of 10, I’m the oldest person in my class,” Hoffman said. “Some (students) will come to me for advice. I look forward to giving them advice, hoping that my experience will keep them going and keep them from giving up.”

Hoffman hopes to graduate in the fall of 2017 and become a counselor.

“I’m hoping that I can direct abused children to connect with people who will help them instead of bring them down,” she said.

Hoffman wants to guide abused children to help them understand they are not at fault and their abuser is the one making poor choices.

“I’m hoping that as I start helping abused children, I can help them make better choices instead of turning to drugs and alcohol,” she said.

Esqueda foresees a bright future for Hoffman as a counselor as she can draw on her past experiences to relate to those in need.

“Growing up in (foster homes), feeling unloved, seeking love from the wrong kind of men, making food her best friend, living on welfare, turning to alcohol and overcoming every one of those difficult times makes her a more compassionate person who truly understands what others are going through who are seeking help, hope and direction,” Esqueda said.

Hoffman also plans to write a book about her life story in order to help adult survivors of child abuse.

Hoffman said she is happier and healthier than she has ever been, and she no longer believes one needs drugs or alcohol to have fun.

“I was able to overcome all that hurt and bitterness, and to be where I am today, I am grateful,” she said.