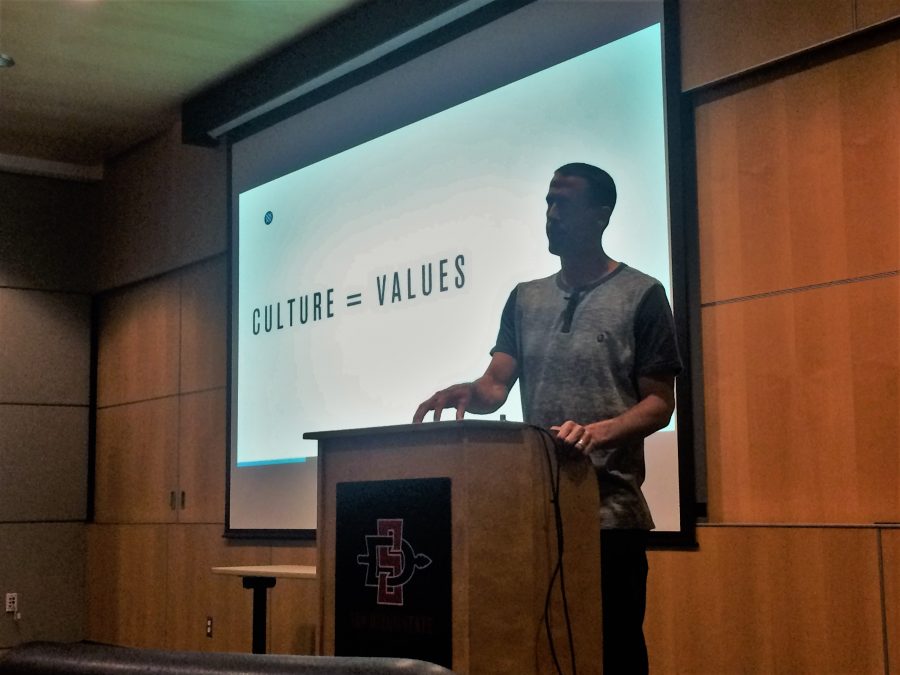 Bernhard Schroder, director of the Lavin Entrepreneurship Center, introduced Wilson to the audience, which was made up of both business and non-business majors. Important discussion topics included Wilson’s personal background, entrepreneurship, the significance of company culture and establishing relationships in the workplace.

Wilson grew up in in San Diego, specifically in the Clairemont area. He attended James Madison High School and worked in the Clairemont Surf Shop for seven years. After high school, he attended Mesa College and eventually transferred to San Diego State. After graduating from SDSU in 1993 as a marketing major, he worked at well-known companies including Oakley and Reef. In 2009, he decided to found Stance, a sock and underwear retailer.

“This is not something I had expected. I never thought I would be standing up here talking to you all today,” Wilson said.

In recent years, Stance has grown and continues to work with many of what it calls “Punks and Poets” including  the NBA, the MLB, Rihanna and many more.

“We all wanted to conduct business in a fun way,” Wilson said. “The five of us were looking to be a part of something unique with great people.”

Wilson discussed his goals for the discussion with students.

“I hope that they assess the cultures and the relationships built within these businesses as they go to work for them in the future,” Wilson said. “ … Investing in culture helps you succeed long-term in a business like this.”

David Shadi, vice president of public relations and fundraising for the SDSU Entrepreneur Society, said he found this event inspiring.

“It will motivate many students to go out and take a step toward their passions,” he said.

Shadi added, “Not only are we getting success tips from one of the most successful people in the sock industry, many of us aspiring entrepreneurs can relate to John because he’s an alumnus from our school.”

Much of Wilson’s lecture was devoted to his advice for ambitious students seeking careers in business, marketing or entrepreneurship.

“The best thing aspiring entrepreneurs can do is hustle, work hard and not be afraid to do what it takes to get to the next level.”