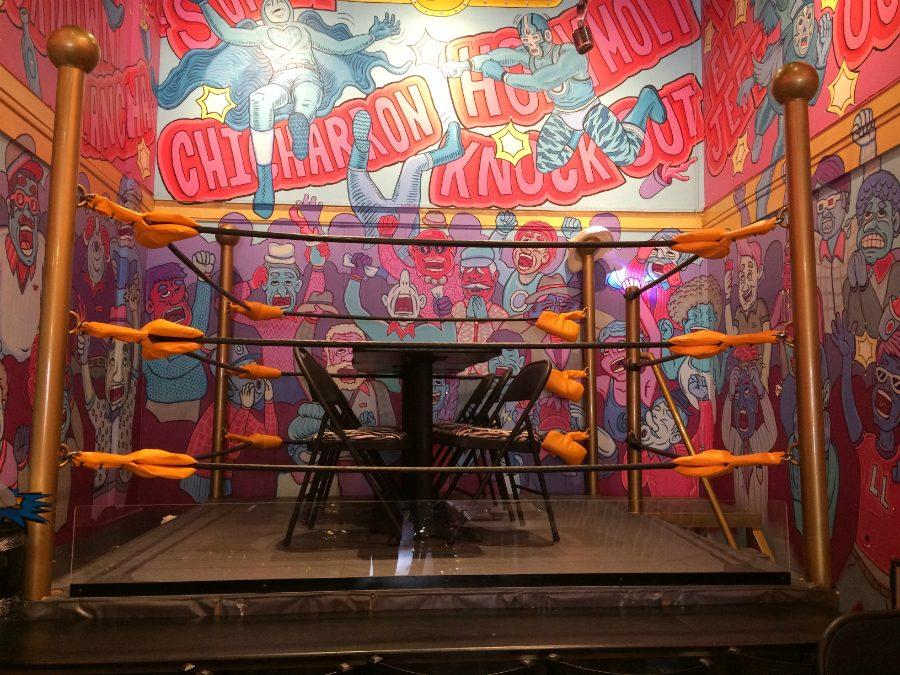 Wrestling and Mexican cuisine come together at North Park’s Lucha Libre— a restaurant where the luchador reign supreme and the salsa is plentiful.

Inside the eatery’s unassuming entrance, the bright pink walls are adorned from the floor to ceiling by all things luchador. Photos of Mexican wrestlers in action hang next to posters advertising historical match ups between legends of the sport. At the far end of the restaurant is a miniature replica of a wrestling ring, complete with a hanging microphone and a mural of audience members in an absolute frenzy. Lucha masks are emblazoned on the arena-style seats.

Opened by three brothers — Jose Luis, Maurilio, and Diego Rojano-Garcia — the restaurant’s first location opened in Mission Hills in 2008. It wasn’t long after that it became renowned by locals and visitors alike for its quirky take on casual dining. Lucha Libre expanded first by bringing its gourmet tacos to spectators at Petco Park and then a second brick-and-mortar location in North Park in 2015.

Aside from the wall of luchador masks hanging above the entrance, the first thing one will notice at Lucha Libre is the look on the faces of newcomers to the restaurant. It can best be described as an intriguing mix of confusion, amusement and sheer excitement. Lucha Libre is a restaurant much like the sport it celebrates: loud, bold and only the bravest will step in the ring for a taste.

But make no mistake: the food is just as much part of the craft as is the wrestling.

The menu is broken up into four main sections: breakfast, tacos, burritos, and quesadillas. The menu also has a specialties section, sides, and a drink menu.

Breakfast is only served from 8 a.m. to 11 a.m. Those looking to start their day with a huevos rancheros burrito or a breakfast TJ dog should be prepared to come early.

The rest of the menu is a modern take on traditional Mexican street food. There’s the holy moly — a chicken burrito with mole sauce, rice, queso panela and sour cream. It’s a good choice if you’re a fan of mole sauce.

Those looking to indulge with some seafood can order the excellent surf-and-turf taco. It’s a wonderful combination of steak and shrimp with other flavors that could be mentioned, but is it even necessary to do so since the taco already has both steak and shrimp?

Of course, what modern take on cuisine would be complete without a vegetarian option? For that, there is the veggie taco. It’s plentiful in the vegetable department and features zucchini, mushrooms and corn.

The specialties section is also one worthy of exploration. One local favorite is the TJ dog — an all-beef hotdog wrapped in bacon and topped with ketchup, mustard, mayo and fajitas.

UC Riverside graduate Luis Franco ordered the TJ dog for the first time. The self-proclaimed “foodie” thought it was an interesting take on the hotdog.

“They add fajita to the hotdog,” Franco said. “I’ve never had that before. They also add ketchup and mustard to it, and I thought that was really good.”

Many of the menu items at Lucha Libre range in between the $4 to $6 and any item can be ordered as a Pro Meal, which includes rice, beans and a small drink.

A tip worth noting, anyone visiting the restaurant wearing a lucha mask gets an additional “Luchador discount.”

Overall, Lucha Libre is a delight for the eyes and the taste buds.